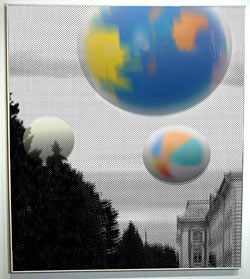 The walls were as tightly packed as the crowd at Gallery 825. On Saturday, April 21st, the  Los Angeles Art Association presented Gem, the kick-off to their Spring 2012 Art Season.

The exhibition showed more than 200 “affordably-priced original artworks for sale.” LAAA’s mission is to provide opportunities, resources, services and exhibition venues for Los Angeles artists, with an emphasis on emerging talent. Founded in 1925, LAAA has launched the art careers of many celebrated artists and has played a central role in the formation of Los Angeles’ arts community.

This one-night-only event at LAAA’s Gallery 825 on La Cienega Blvd is widely embraced by the Southern California art community as an important showcase of emerging art trends. 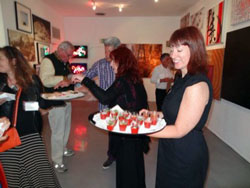 While attending the event, I had the opportunity to talk with some of the artists about their work. Adele Mills presented her deeply ironic work, “Eat Cake,” a painting that achieves parallax by layering clear polyester an inch and a half over a canvas painting. Our earth is trivialized by appearing next to a beach ball, with an architectural reference to Versailles, and by extension Marie Antoinette and the utterance that condemns all ruling classes with the phrase: “Let them eat cake.”

Joan Wulf had a few of her metal and wood square meditations that through necessity of having so many artists in so little space, were separated by another artist’s work. Joan’s work cries out for more space for the eye to settle on.

Elyse Wyman displayed an 8 inch cracked amber torso that spoke of damaged perfection. I was not able to view her other larger torso because it had sold moments before I was able to speak with Elyse. Shoe-horned into a corner between some really nice figurative paintings was a five-foot photogenic photogram entitled “Plenty Endowed,” by Richard Slechta. The dramatic colors were achieved through paint and bright light applied to photosensitive paper and mounted on aluminum.

Karrie Ross had her painted bustier sculptures on display – at least for an hour. Karrie told me the woman who purchased the work understood that the works were about stimulating conversation on many levels. The exterior is beautifully decorated, while the inside has text and writing reflecting the owner’s inner dialog about beauty and self worth.

Alisa Gabrielle invited me to feel the contours of her Rubenesque sculptures. Alisa says it’s about honoring women, our planet and the humanity on it. While Lisa Occhipinti and I were discussing her collage of cut books, photographs and bees wax, one of the gallery attendants informed us that the piece had sold as she removed it from the wall, leaving nothing but the nail it had hung from.

The event was a huge success, as evidenced by the empty nails and din of conversation.

Special thanks to Marlene Picard for providing images from the show.