Skip to content
Event Review: Sights, Sounds and Innovation at Lightning in a Bottle

Written by An Bar –  Lightning in a Bottle hosted their annual festival over Memorial Day Weekend (May 21 – 25) which brought over 30,000 participants to the isolated desert grounds on the outskirts of Bradely, California. The sustainable music and arts festival became home to an eclectic mix of progressive millennials, health-conscious advocates and green-thumbed innovators. 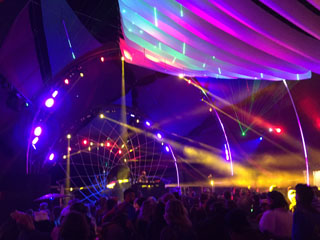 hopped on a school bus to campgrounds and festival which was vaguely reminiscent of the first-day of summer camp. Entering the grounds was reminiscent of Disneyland’s Frontierland fused with futuristic post-apocalypse lights and electronic music. This organized chaos was facilitated and fostered by a sense of mutualistic respect, where attendees welcomed others into the weekend-long community.

Throughout the four-day festival, attendees were introduced to forward-thinking initiatives, including world lectures attempting to understand the power of Hip-Hop in the Middle East and the effects of positive affirmations in health. Between day-time lectures, pop-up yoga sessions, and meditation sound-baths, a sense of commrodery and purpose formed within festival grounds which transcended the four days of the eco-friendly event.

Festival stage design innovation was brought by festival host’s, The DoLab, which are also responsible for Coachella Music Festival stage design. This artistic expression was represented through music stages including an architectural staple, The Woogie Stage, which joined the man-made lights and sounds with the organic visuals of sand-dunes and mountains surrounding the venue.

Festivities and a musical mix of electronic trap, jazz and experimental classical dominated the night life. Performers including William Close played the Earth Harp during sunset to add to the mystical atmosphere while festival co-founder and members of Lucent Dossier preformed an avant guard art and music experience at dusk.

Food served throughout the festival was primarily vegetarian and sustainable whereby a green policy was intact. Not only were trash, recycling and compost options available, a notable option was to leave unfinished dishes in an area to be saved and shared for other hungry attendees. This form of recycling eliminated food waste was overseen by volunteer attendees who monitored this initiative by confirming donators were healthy via an onsite questionnaire. 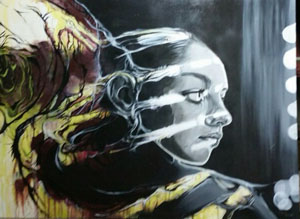 Throughout the festival, art installations and collaborations were created.

Santa Barbara artist, Deanna Graves expressed her inspiration for being an active participant in the festival through creativity and collaboration. “For me the most inspiring moments at LiB come from an interaction with something that exists without a purpose of making money. Rather, something inspirational created just well…to be inspirational.”

Graves’ collaborative painting with artist Roy Huerta reflects her participation in Lightning in a Bottle. The painting, which depicts two people, were drawn from models at the festival. The bubbles coming up from their hands hold stories from festival attendees who shared meaningful phrases, pictures, ideas, and quotes in the bubbles. Grave’s explains that, “in this sense, the painting became a mosaic of inspirational moments for the festival-goers at LIB.”

More of Deanna’s work can be seen at: deannagravesart.com/  For more information about LIghtning in a Bottle visit the website at http://lightninginabottle.org/