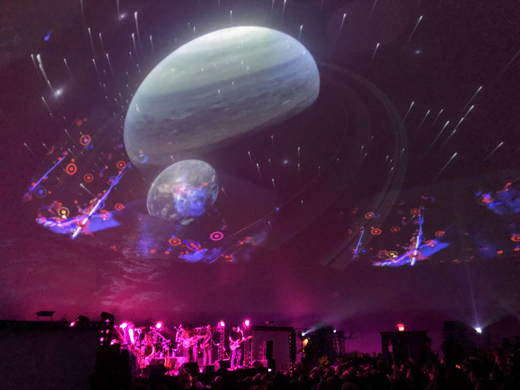 Rock bands and albums come and go, but, without doubt, one of the most iconic rock albums of all time is Pink Floyd’s Dark Side of the Moon. Released in 1973, the album highlights the band at its creative peak with David Gilmour’s incredible guitar solos providing the perfect accompaniment to the incredible songs. The groundbreaking recording not only marked a creative turning point for the band, it also was its first U.S. chart-topping release. It remained on the Billboard charts longer than any other record in history – from 1973 right through to 1988 and to date, it has sold an estimated 45 million copies. 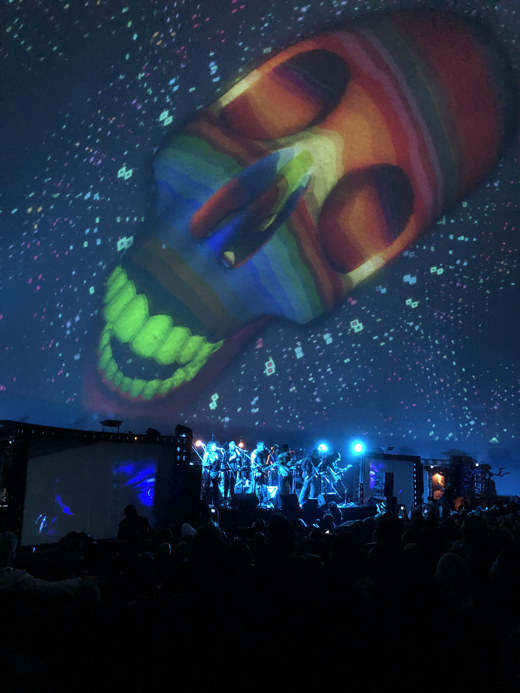 So, if there is one album you would want to hear in a new age, pychedelic setting under a dome, this is probably your best choice. And, that is exactly what happened last week, when a group of amazing musicians played the entire album during Wisdome Los Angeles’ Dark Side of the Dome.

Huh, you say? Well, let me backup for a second. Wisdome Los Angeles opened up about a year in the heart of Arts District in downtown Los Angeles. It’s a 35,000 square foot art park described as the world’s first fully immersive entertainment art park and it includes five fully immersive, 360-degree domes outfitted with surround sound to create a shared VR experience that combines the future of art, entertainment, and technology.

A current highlight at the art park is the visual journey known as Samskara from renowned digital artist Android Jones. Jones is well known for his layered psychedelic works and live performances using a custom built digital set up. At Wisdome, Jones’ work appears in nine different formats, including digital canvases, “Microdose VR,” a spherical movie theater, and more. 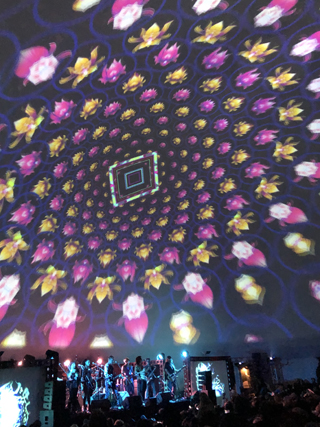 The art exhibition was the perfect prequel for the concert and the setting was great for people watching. The intergenerational crowd seemed very fond of their Pink Floyd shirts and everyone was super stoked to hear one of their favorite albums in such a unique setting.

At around 10PM, the all-star band known as THINK:EXP took the stage. The 10-piece band includes Pink Floyd’s saxophonist Scott Page and vocalist Roberta Freeman, as well as Stephen Perkins (Jane’s Addiction), Kenny Olson (Kid Rock, Hendrix Experience), and Norwood Fisher (Fishbone). The band was exceptional and did an amazing recreation of the album as Android Jones’ astounding 3D visuals filled all corners of the dome. Page and Freeman were clear standouts in the band which makes sense given their pedigree.

The original album was a little over 40 minutes and the band stretched it out a bit. But, after the band finished playing the album, the crowd wanted more. So, the band added some choice Floyd nuggets including, “Another Brick in the Wall,” “Dirty Woman” and “Have a Cigar.” The fans ate it up and the band left to thunderous applause. No doubt, everyone who attended will tell their friends about it. And of course, they will want to check it out first hand. And, so will you. 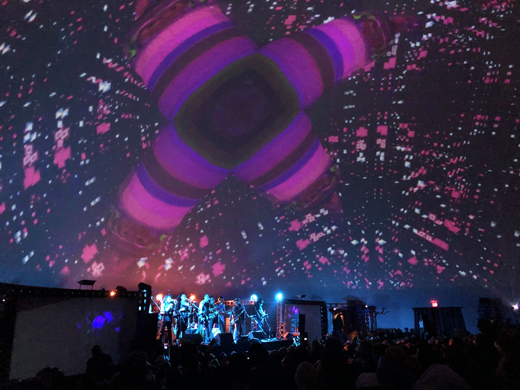 This show was just one in a series of special events that the venue produces frequently. Following two nights of the Pink Floyd spectacular, they presented “Dead in the Dome “celebrating the music and art of Jerry Garcia featuring Melvin Seals & JGB, Steve Kimock, and DJ Logic.

Check the site HERE for upcoming events and don’t forget the edibles. Review by Keith Block. Images courtesy of LAArtParty.