“AMERICAN DEMOCRACY,” a project by PSJM opens at Building Bridges Art Exchange on April 14, 2022, from 6 – 8:30pm The exhibition is curated by Marisa Caichiolo. Remember to confirm with gallery’s website for up-to-date covid protocols and guidelines – (proof of vaccination and masks MAY be required).

American Democracy is an installation made up of 59 historical paintings: a painterly portrait of Americas’s political history rendered geometrically. With this new project, the Spanish collective PSJM emphasizes on developing its own language within the field of abstraction, a line that PSJM has called “social geometry” in which intensive geometric compositions are generated from statistical or scrutinizing data. These are therefore paintings that can be read. The title of the work gives meaning to the abstraction, a critical content that perverts the very same tradition of formalist painting. The raw material processed by the knowledge: society is information, and this is exactly what forms the basis of the “social geometry” visual strategy, a project in which infography and American color-field painting tradition come together with a sociological study to create a critical reflection.

The realization of this project involves rigorous research on the presidential elections throughout the United States history. A nation that was born as a democracy and has remained in this way uninterrupted in time. The American democracy is the only democracy in the world that has been not stopped. This fact provides us a privileged timeline to make a large installation that visually shows the fluctuations of a democratic system. Several readings spring from this panoramic view. In the task of rendering data and applying distinctive colors, the first thing that may strike the European point of view is the assigning of color to each policy option, which is seemingly arbitrary and even diametrically opposite to that conventionally used in Europe. In the United States, since the year 2000, mass media has associated red with the Republican Party —despite the fact that the Republican Party is a conservative-leaning party— and the blue one with the Democratic Party, the dominant center-left party. In 2010, the Republican party adopted an all-red logo and Democratic Party unveiled an official blue logo. In the United States, blue is also often associated with organized labor, since it represents “blue collar” workers. 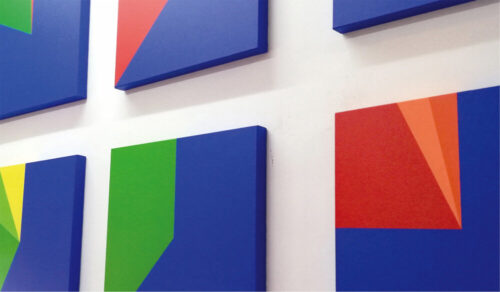 But this aesthetic issue is no exception to other historical readings, as currently opposing parties are born of the same root: the Democratic-Republican party of Jefferson and Madison. This party was the direct opponent of the Federalist Party during the early nineteenth century, later breaking into two and forming the Democratic Party under the leadership of Jackson. The political route of the latter half of the Democratic-Republican party will evolve into various parties, such as the National-Republican or American Whig parties, and settle as the current Republican Party. Meanwhile the Democratic Party has not had a consistent history ideologically speaking, as Southern Democrats and its opposition to abolitionism have placed Democrats sometimes more to the right than some Republicans. That is, not until Roosevelt Democrats, which existed in a purely social area: a political position that has been changing in relation to historical contingency, the ideological positioning of their leaders, and the demands of their constituents.

Perhaps the most obvious reading that the viewer may have when faced with this installation, is the clear trend toward bipartisanship. A system in which two major parties take turns in power, which has been exported to Europe, and has now entered into crisis as a result of the perception that people have that there are really few differences between the two options, especially in economic policy, today dominated by the mandates of neoliberalism. American Democracy is then presented as an aesthetic experience full of sociopolitical meanings that unfold in different layers. A work that appeals to the critical eye of the beholder, allowing himself to draw their own conclusions.