Skip to content
On View thru May 1, 2014: Skidmore Contemporary Art, John Tierney 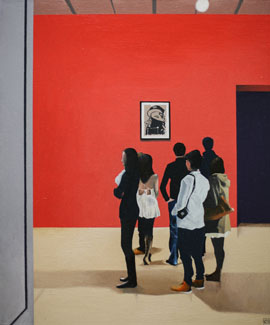 John Tierney lives in Durham City in the north east of England. He is a regular visitor to Los Angeles and is interested in both the urban landscape of the city and the desert landscape of Joshua Tree National Park. The light in LA and the desert have, for him, a particular resonance. He finds the architecture of LA seductively eclectic – both old and new iconic buildings and the whole range of small-scale, quirky establishments that are sometimes invisible to those who live here full-time. In addition, some of his work has focused on images of New York and Helsinki, Finland.

Working in oil, the basic aim is quite straightforward: to create paintings that provide a strong sense of place, a feeling of what it is like to be there. For Tierney, being a visitor, an ‘outsider’ from another country, is a key dimension to this project. In terms of important influences, he admires the work of artists Edward Hopper, Peter Blake, and David Hockney.

It is only recently that he has become a full-time artist. Until 2010, he worked in higher education as a lecturer and researcher in criminology at Durham University, England. John has also published a wide range of articles and books including ‘Criminology: Theory and Context’ and ‘Key Perspectives in Criminology.’

In 2012 he had his first solo exhibition at the British designer Paul Smith’s iconic store on Melrose Avenue in Los Angeles. His second solo exhibition was at the Horsebox Gallery in Knightsbridge, London. In December 2013 he won the top prize of Artist of Distinction in the inaugural Joshua Tree National Park art competition. Over the last few years his work has attracted a steady following of private collectors and admirers around the world. 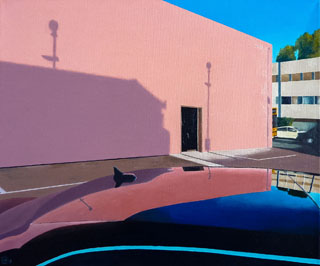 John also maintains a keen interest in playing the guitar and songwriting. In 2009 he recorded and released an EP of his original songs entitled ‘The Silence and the Stars’, and performed live at Hotel Café in Hollywood along with other musicians such as Tom Morello, Perry Farrell and Ben Harper.

John divides his time between his home in England and visiting his 3 sons in Los Angeles, New York, and Helsinki.