October ain’t over yet!!! Don’t miss these fabulous events for the last days of October…we’ve got some fun Halloween events too.  We’ve added some more October events plus we have some fantastic November art parties coming up…Our VIP subscribers already know whats coming up in November – find out how to become a VIP subscriber on our Contact / Rates Page and receive high priced tickets to benefits and galas throughout the year for FREE!

Through October 31, 2017:
Start celebrating Halloween early with “INVASION” at The Magic Castle® Members & their guests* are welcome to join the party in their Halloween’s best for the biggest week of the year at The Mag Castle®: Halloween Week! The Magic Castle will transform the club into its very own “INVASION!” inside-out! Think retro “War of the Worlds,” “Invasion of the Body Snatchers,” “The Day The Earth Stood Still,” etc.

The art of Brayden Bugazzi will be featured. Brayden explained the work he is exhibiting, “I am showing a collage fusing vintage space exploration recreating a famous photograph from the Moon landing, to the new modern dreams of reaching further out to Mars and beyond. This will play into the Space, invasion theme that the Magic Castle is building with their Halloween event.”

Through October 31, 2017:
Universal Studios® Halloween Horror Nights® brings together the sickest minds in horror to immerse you in a living, breathing, three-dimensional world of terror. From the movie studio that invented the horror film genre, prepare for the scariest, most intense Halloween event in Southern California. This year’s event features more mazes than ever with 8 terrifying experiences based on the most frightening films and television shows. It runs through October 31, 2017; Check the website for times and admission costs. Universal Studios Hollywood, 100 Universal City Plaza, Universal City,CA 91608; http://www.halloweenhorrornights.com

October 27, 28, 29, 2017:
In Santa Monica…the Broad Stage celebrates Halloween. With “Horror UnScripted,” Impro Theatre creaks open the door of unease and terror as they present completely improvised plays designed to make you squirm in your seat and keep you up at night. Inspired by the complex psychological horror movies of the 1970s, the Impro Main Company will create never before seen, unsettling stories that thrive off the fear and desperation that live inside us all. Madness, murder, ghosts, isolation, possession, and sickening dread are all on the menu. And since each show is based on audience suggestions, remember…you brought this nightmare on yourselves.

October 28, 2017:
Cinespia Presents at the Los Angeles Theatre present a dreamy night of fantasy, magic and a masquerade ball in one of the most opulent movie palaces in the world! The dark musical fable features the superstar who fell to earth David Bowie in his enchanting role as the glam rock fairy-tale dandy, Jareth the Goblin King, supported by a cast of bewitching monsters from visionary Jim Henson. An unearthly evening full of illusions and delights, with Labyrinth on the big screen. Magic shows, live music, full bars, photo booth and surprises aplenty to explore in the hauntingly historic Los Angeles Theatre.

COSTUME REQUIRED FOR ENTRY. 21+ (wit h valid ID). Our friends at Freixenet Cava will be on-site to toast this Halloween event with some complimentary bubbly for our guests. Happy Halloween! Admission: $35-$85; Doors open: 7:00pm; Show: 9:00pm; 21 and over; The Los Angeles Theatre, 615 South Broadway, LA, Click Here to purchase tickets.

October 31, 2017:
Head to West Hollywood for an outrageous Halloween street party. It is a massive event and the costumes are insane. 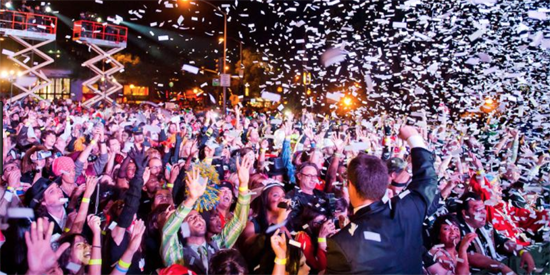 The parade runs along Santa Monica Blvd between Doheny Dr and La Cienega Blvd from 6-11pm. Then the parties continue at many of the local bars. For more details, visit the FB Event Page.

Runs through November 19, 2017:
The Wallis Annenberg Center for the Performing Arts (The Wallis) presents Turn Me Loose, a comedic drama by Gretchen Law, produced by John Legend and Mike Jackson, about the life of trailblazing comedian and civil rights activist Dick Gregory who passed away last month at the age of 84. The production, under the direction of John Gould Rubin, will open in The Wallis’ Lovelace Studio Theater, which will be transformed in part into a comedy club. For additional info see the Upcoming Event Feature…as well as a REVIEW for the show on our Review Page. Single tickets are available for $60 and $75; Performances runs through November 19, 2017: Thursdays–Fridays at 8pm; Saturdays at 2:30pm & 8pm; Sundays at 2:30pm; Wallis Annenberg Center for the Performing Arts, Lovelace Studio Theater, 9390 N. Santa Monica Blvd, Beverly Hills, CA, 90210; http://www.thewallis.org/

Check back the last week of October for a final update! Subscribers will be notified.