In an exhibit space where modern prodigies mingle with established masters, De Re Gallery will debut its Pop Fiction exhibition by pop artist Mauro Perucchetti on Thursday, September 10, at 7:00 p.m. Eliciting global issues through a mix of social critique and pop aesthetics, Perucchetti seeks to truly revive the pop art world. 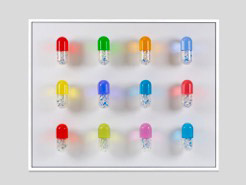 nspired by current events and the world around us, Perucchetti is both a master craftsman and social commentator with his finger on the pulse of contemporary society. He has pioneered the use of pigmented resin, his signature medium that is unexploited in the art world and notoriously difficult to work with on a large scale. Incorporating familiar icons of today’s culture and the 21st century, he has produced innovative and beautifully executed work with a message.
Pop Fiction is a result of Perucchetti’s conscious passion for life at a physical and instinctive level, along with his infatuation with aesthetics. Incorporating unique mediums such as pigmented resin, Swarovski crystals and stainless steel to name a few, he showcases exceptional craft and an unusual approach. With work ranging from Monument to the Dollar, an engraved, life-size marble dollar, to Don’t Mess With The US, a sculpture that pays homage to America and its feat to remain a powerhouse through turbulent times, Perucchetti’s Pop Fiction can be appreciated by a wide genre of people around the globe.

“I have put everything into making my art. I hope that people will connect with the messages and ideas in my work. Above all, I want to put “art” back into conceptual art. I am inspired by the masters and driven by process, technique and style,” says Perucchetti.

Perucchetti’s ability to fuse minimalism and pop, with elegance and ironic wit, has contributed to his international acclaim with a range of solo and group shows across the world. He has showcased his work twice at the Royal Academy of Arts in London, UK, at the Baker and Sponder Gallery in Miami, FL, and at Imago Gallery in Palm Desert, CA, in 2015 to name a few. Additionally, Perucchetti showcased four monumental sculptures at a 2012 public installation during FIAC in front of the Louvre in Paris, France. Along with being discussed in numerous books for his artistic twist on modern day issues, Perucchetti has been featured in high-profile publications including Vanity Fair Italy, GQ Magazine, The Wall Street Journal and Blueprint Magazine amongst many others. 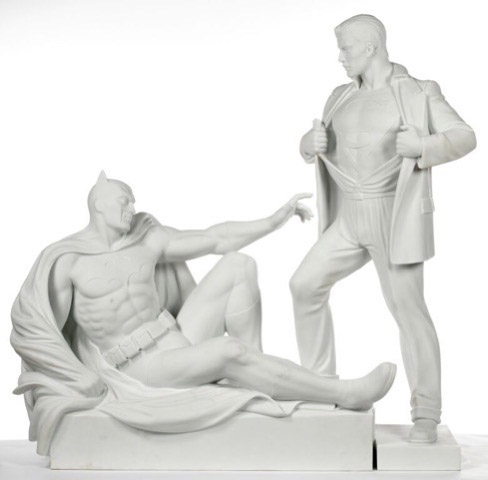 The sculpture is characteristic of Perucchetti’s commentary on the modern Western World, in this case a reflection of his belief in marriage equality. A second sculpture, “Michelangelo 2020: A Tribute to Women,” represents women’s role in history as the “underdog” and will be installed on September 8 alongside Modern Heroes. Combining classicism with contemporary issues and his innovative style of art, these pieces represent a return to Perucchetti’s roots in Italy and his exploration of themes and boundaries of gender. Both monumental sculptures are presented by the City of West Hollywood and its Arts and Cultural Affairs Commission as part of its ongoing “Art on the Outside” public art program.

Using his background in Film, design, architecture and extensive travel, Mauro Perucchetti mixes conceptualism, minimalism and pop art in a series of iconic pieces that inspire society to think about global issues. Pop Fiction will be on display exclusively at De Re Gallery from September 10-October 10 in Los Angeles: 8920 Melrose Ave. in the West Hollywood Design district. For further information on De Re Gallery, visit www.deregallery.com