“The play’s the thing.” The Shakespeare Globe Theatre’s production of Hamlet at the Broad Stage in Santa Monica is an engaging and highly entertaining presentation of the classic tragedy of murder, betrayal, existential angst, madness and revenge. The actors speak the Bard’s poetic language with a crispness and clarity that enables the audience to easily follow the story and connect emotionally with each character. 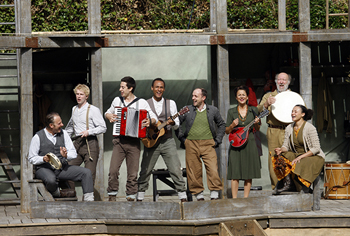 hael Benz leads the ensemble as Hamlet with  even other actors playing the full complement of characters — highlighted by Peter Bray as Prince Fortinbras, Miranda Foster as Gertrude, Tom Lawrence as Horatio, Carlyss Peer as Ophelia, Matthew Romain as Laertes, Christopher Saul as Polonius, and Dickson Tyrrell as Claudius.

The openness of the tightly constructed stage set and with the house lights kept up creates a sense of intimacy that has the audience drawn into the action. In addition, the actors weave a wonderful rhythmic musicality, and at moments humor, throughout the two hour forty-five minute performance with song, accordion, violin, mandolin, and percussion that keeps the pace of the performance move briskly with an upbeat energy.

As the story line progresses, the actors make just the right amount of effort to emphasize the familiar lines that reinforce the timeless quality of the play and remind us of the those poignant human truths as — “This above all: to thine own self be true”; “There is nothing either good or bad, but thinking makes it so; “Conscience doth make cowards of us al ” and of course– “Brevity is the soul of wit.”

Directed by Dominic Dromgoole and Bill Buckhurst, Hamlet continues at the Broad Stage until November 25.