Jeffrey Deitch Los Angeles presents a full survey of Judy Chicago’s early works. There is no other artist like Judy Chicago. A talented pro-active forward thinking artist Chicago never received the credit she deserved. History has documented that talented women have been overlooked for years. Let’s face it, the art world was a literal ‘boys club’ in the 50s 60s and 70s. Chicago paved her own way. She created her own outside of the box success. 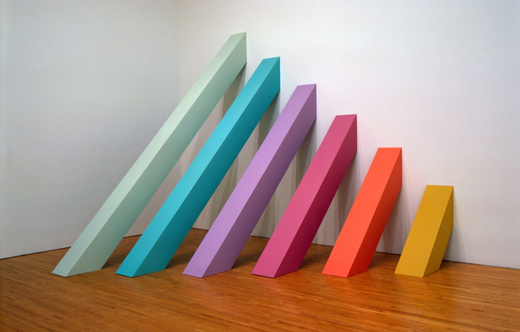 The artist created a remarkable body of work in Los Angeles and Fresno from 1965 – 72 that has been largely unseen for fifty years. The exhibition will feature paintings, drawings, sculpture, installations, and documentation of Chicago’s environmental and fireworks projects.

Chicago’s 1965 sculpture Rainbow Pickett was included in the legendary Primary Structures show at the Jewish Museum in New York in 1966, but the structure of the art world at the time made it difficult for a young woman to enter the art discourse. Partly in reaction to the challenge of getting her work to be taken seriously, she began her Feminist art project which changed the course of contemporary art. The impact of this project, and her immensely influential work, The Dinner Party, 1974-79, had the effect of partially eclipsing her earlier work. When several of her Los Angeles works were included in the Getty Foundation’s Pacific Standard Time exhibition program in 2011-12, it was a revelation. Since then, her Los Angeles and Fresno works have been shown at museums in Brooklyn, Nice, Chicago, and Miami, but the presentation at Jeffrey Deitch, Los Angeles will be the first time that the full body of work from this period will be presented. In addition to her Lifesavers and Fan paintings and major sculptures including Rainbow Pickett, Trinity, and participatory works like 10 Part Cylinders, the exhibition will include a reinvisioning of the installation Feather Room, 1965, created in collaboration with Lloyd Hamrol and the late Eric Orr.

Judy Chicago (b. 1939, Chicago) is an artist, author of fourteen books, educator, and humanist whose work and life are models for an enlarged definition of art, an expanded role for the artist, and women’s rights to freedom of expression.

This exhibition produced in partnership with Salon 94, NY.