“On Beckett” opened at Center Theatre Group’s Kirk Douglas Theatre on Wednesday, September 18 at 8pm. Conceived and performed by Bill Irwin, the actor is haunted by the work of Samuel Beckett – language he learned over years as a performer and now finds himself considering and reconsidering. Read a review of this show by one of our staff writers – Go to the Theater drop-down of the Performance Reviews Page. 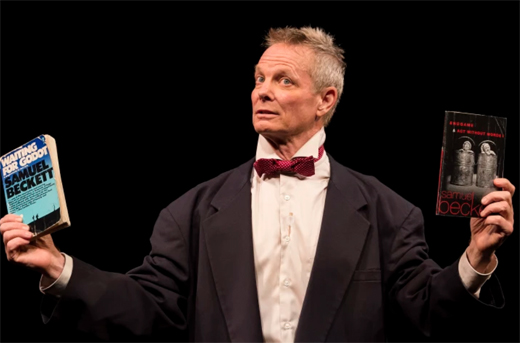 In this intimate 90- minute engaging, funny and illuminating evening, Irwin explores his own personal “actor’s relationship” to the Nobel Prize-winning Irish writer, mining the physical and verbal talents acquired from his years as a master clown and Tony Award-winning actor. Irwin’s approach to the comic, the tragic, to every side of Beckett’s work – including “Waiting for Godot” and “Texts for Nothing” – offers the opportunity to experience Beckett’s language through the lens of a uniquely skilled performer.

Bill Irwin is a Tony-winning actor, director, writer and clown. His original works include “The Regard of Flight,” “Largely New York” (four Tony nominations), “Fool Moon” (co-created with David Shiner), “Old Hats” (co-created with David Shiner), “The Happiness Lecture” and others. He has starred in Broadway, off-Broadway and regional productions, including “The Iceman Cometh,” “Who’s Afraid of Virginia Woolf” (Tony for Best Actor in a Play – also at the Ahmanson Theatre), “The Goat, or Who is Sylvia” opposite Sally Field, “Waiting For Godot” with Nathan Lane (2009 for a Drama Desk Award nomination) and “Texts for Nothing.” Current television roles include Mr. Noodle of “Elmo’s World” and Cary Loudermilk of “Legion.” His film credits include “Rachel Getting Married,” “The Grinch Who Stole Christmas,” “Eight Men Out,” “Interstellar,” “Stepping Out” and others.

Tickets for “On Beckett” range from $30 – $75 (ticket prices are subject to change). Call or fo to website to order tickets. Free three hour covered parking at City Hall with validation (available in the Kirk Douglas Theatre lobby).