High and Dry is the first of a series of art exhibitions at Fab-gallery in Santa Monica curated by Delia Cabral, after she has been based on the east side of LA for 5 years. Artists include: Osceola Refetoff, Sabine Gebser, and Tori White.

High and Dry is a summer 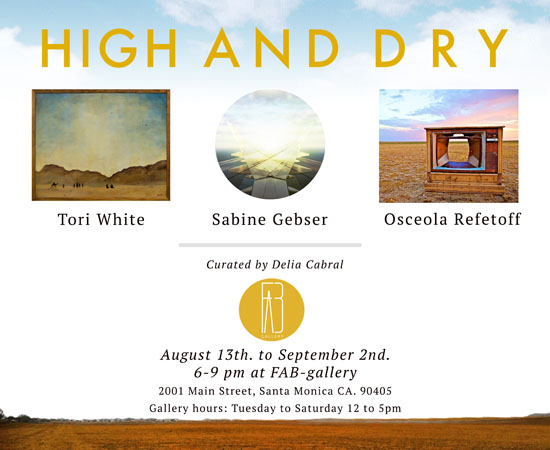 exhibition that explores horizons in the visual arts, showcasing the works of two photographers, Osceola Refetoff and Sabine Gebser, and one painter, Tori White. Exploring the horizon in unexpected ways, either from up high, or wide open, to dry, saturated and stunning. Osceola features his Arm chair in the sky series that shows our familiar world from an unfamiliar vantage. Sabine creates rich images with kaleidoscopic horizons, presenting her pieces in an unusual round format. Tori captures a wide open feel in her small format paintings.  All in all, these three artist bring a fresh perspective to Perspective.” – Delia Cabral, Santa Monica

For this new exhibition “A MINOR” – Brooklyn based artists Rubin415 and Joe Iurato celebrate melancholic tones in music through their artwork. In an era where happiness is considered inherently good and sadness inherently bad, the notion of melancholia is perceived negatively rather than seen as a mellow, pensive mood that can inspire reflective thought.

It’s gonna be a busy night in Chinatown…we’ve got over six art parties happening!

Charlie James Gallery is delighted to present New York-based artist Glenn Goldberg in his first solo show with the gallery. In “Somewhere,” Goldberg continues to paint with an intimate, subtle touch and an ongoing involvement in color, structure, pattern and iconography related to living things (dogs, birds, man and assorted natural forms.)

ew body of work by Kille, featuring more than 10 new paintings, takes some of his past themes and utilizes them in a new light, allowing his vulnerable elephants to coexist in a more abstracted space where scale and proportion become blurred. These paintings are a mash up of images and script with a painterly yet contemporary twist.

The clapotis is an overlapping wave pattern caused by a wave train hitting a fixed vertical object sending a reflected wave in the opposite direction resulting in a multi directional surface. This idea or notion of overlapping and layering in relationship to connectivity of all things is the source of inspiration for this body of work.  Through a multitude of stylistic approaches employed, Kille creates a broad landscape of adversity and hope.

Kille uses images and decomposed script that is related to his personal experience of time and place creating a balanced tension within the work. “Clapotis” is partially an installation through geometric elements in the paintings that continue their trajectory onto the gallery wall allowing the work to be multifaceted in nature and interactive to its viewer.

A self-taught artist based in Los Angeles, Raven Servellon creates “optrickal delusions” using marker and ink on paper, layering intricate & playful imagery which interweave a multitude of references, both political and personal.

Raven Servellon considers her labor intensive drawings as the next generation of Op Art. 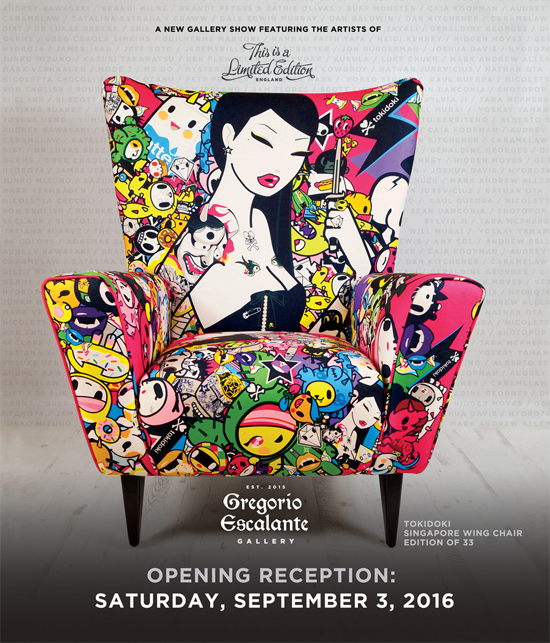 ed to announce its upcoming exhibition in collaboration with This is a Limited Edition​ – “LA/EDN.”

The England-based company collaborates with international artists to produce limited edition prints, and high quality home goods. The upcoming exhibition in Los Angeles is the beginning of a series of exhibitions leading up to their ten year anniversary, showcasing a selection of the talented artists and designers they have worked with to date.

In the Highland Park area…

h everything going on in the world, your life, your job, even just the stress of grocery shopping. Sometimes we just dont need to have so many feelings and sometimes we just need to feel completely NEUTRAL. Step into this new exhibit with us as these artists explore their worlds of feeling NEUTRAL.

Today, the instant gratification of social media is a sufficient end game to many, but what happens when you print that photo and present it as fine art? What happens when Daniel Grant shoots exclusively with a novelty vintage toy camera that can barely focus? Or when Jeff Alu creates new perspectives by digitally manipulating his photographs taken with non-professional grade equipment? or when Sarah Allegra or Sequoia Emmanuelle push photography to create their own personal new worlds? The result is the 2nd annual photography show at the hive gallery. the fine art show asks what makes a fine art photograph?

A native of California, Marvin Robinson began his music career singing with The Young Americans appearing on numerous variety shows. Performing with The Kids Next Door, he opened for Frank Sinatra, Bob Hope, Olivia Newton, and the Harry James Orchestra.

Robinson’s smooth lyrical style captures the hearts and souls of his listeners. An evening with Robinson takes his audience on a magical journey through musical memories of love and loss. His interpretations of the songs of Frank Sinatra, Tony Bennett, Sammy Davis, Marvin Gaye, The Spinners, George Benson, Mark Anthony, The Commodores, and the Nate King Cole demonstrates his ability to musically connect to all generations.

In the Silverlake area…

What started as a reunion in 2013 with tours of Japan, Australia, and the UK, has continued and evolved into a full blown return in full force of the FLAMIN’ GROOVIES. In the past three years the band has toured the USA extensively with repeated visits to New York, L.A. and their hometown of San Francisco, as well as recently returning from a hugely successful tour of Spain, France and Italy. They celebrated their 50th Anniversary in 2016, and are now putting the finishing touches on a new album, a documentary film, and have released a single earlier this year on Burger Records, the first of their first new recordings in over thirty years. This new single features two Cyril Jordan/Chris Wilson penned tracks – the recently written “Crazy Macy” and the first track ever written by Jordan & Wilson, “Let Me Rock” recorded here for the first time!

The Cyril Jordan, Chris Wilson, George Alexander line-up featured on the three albums released by Sire Records, that rocked the UK, Europe and the US from 1971 – 1980 are BACK IN ACTION. With the addition of Victor Penalosa on drums, they continue to present their own unique and infectious style of rock n roll with such cult classics as “Shake Some Action,” “Slow Death” and “Teenage Head.”