Lots going on – lets start with some early ones. Be aware there is an early art event taking place in Palos Verdes at 3pm and another in San Pedro at 4pm. Both are listed at the bottom. So scroll down,before planning your art party hop.

LA Food Fest kicks continues through the weekend. Touted as the LA‘s largest and most affordable tasting event, it offers a low price for general admission tickets on Saturday, where one can decide which cuisine to try. See Saturday’s page or CLICK HERE for more info.

VIP GOLDEN HOUR – $69  – Saturday, July 9th • 12pm-2pm (doors at 11am); Also takes place on Sunday – see Sunday’s Page.
This is the original VIP style ‘all you can eat’ Food Fest experience. Two full hours of all inclusive, early admission entry to enjoy unlimited tastings of food and beverages from our 100+vendors, plus beer, wine and cocktail sampling, entertainment, shady lounge areas, all day entry to the MRKT event that follows Golden Hour, and two drink tickets for use at our cash bars.

Check the website for an additional event – LA FOOD FEST IN THE ROSE GARDEN – $95 / $125 – which also happens on Sunday.

Beginning in 1978, Rosamund Felsen Gallery has represented artists and exhibited artworks that have challenged, furthered and championed the culture of art in Los Angeles. Opening on La Cienega Blvd, moving to West Hollywood, then Bergamot Station and last year to Downtown Los Angeles, the gallery has experienced memorable art presentations, with curators, writers, collectors and artists participating in the creation of a community around the gallery.

After almost four decades, Rosamund Felsen Gallery will be having its final exhibition; it will include artworks by each of the current gallery artists and will be exhibited with reverie and tremendous pride.  In its way, the final exhibition will be paying tribute not only to all the extraordinary artists who have filled both the gallery space and gallery’s identity over the years, but will also serve as a marking point for the current gallery artists’ ongoing careers.

Though the physical location will be closing after this exhibition, the gallery will continue to maintain an online presence through the gallery’s website: http://www.rosamundfelsen.com

Head to the B building…

“WORK / W=Fd” consists of 999 golden paper cranes suspended from the ceiling and a looped projection on a single unfolded sheet, bathed in an artificial sunset. An allusion to the Japanese tradition of the origami crane and its mythical origin, the installation explores the nature of time and energy in terms of materiality and the virtual.

Craig Krull Gallery is pleased to present Paint is a Thing, a group

This exhibition showcases seven contemporary artists who use paint to create both an object and an illusionistic space.  While these artists embrace the materiality of paint, they also depict images and narratives, allowing the paintings to become more than purely objects.  Each piece incites a layered read, with a visceral reaction to the physicality of the surface, as well as a cerebral reaction to the illusion described. 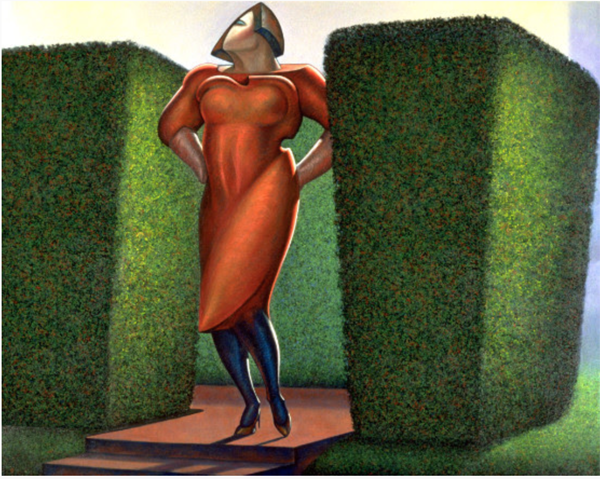 Working in Los Angeles for the past forty five years, Jim Barrett finds inspiration in the magic landscape and people of the area. This body of work is an exploration of Los Angeles diversity and the complexity of the human condition. The exhibit will also feature the world premiere of Barrett’s massive 30ft multi-panel work War Complex.

Stay tuned, the ARENA 1 event at Santa Monica Art Studios has been postponed to next week…July 16.

Let’s head back to West Hollywood…

MIER GALLERY is pleased to announce a 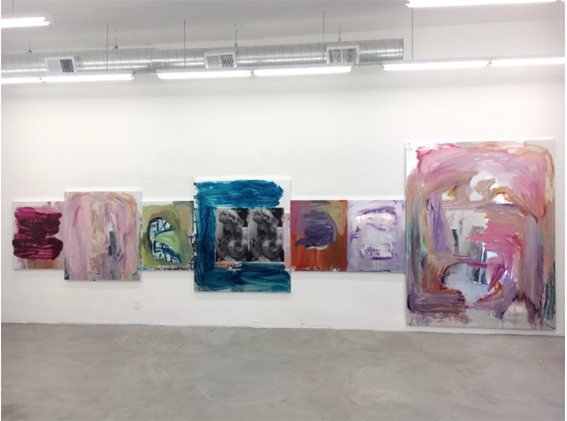 Here is a portion of what the gallery forwarded by G. Leddington: “The frenetic energy of Bonde’s painterly gestures are dissident and at times self-destructive. Internal spasms made external, the vastly abstract gestures are indeed precisely just that; gestures.  Here however we are not referring to what is usually understood to be a kindly exchange between two people, here we are referring simply to the notion of a physical movement that leaves a material residue.

Also nearby on Highland Ave…

Kohn Gallery presents its first solo exhibition with London-based artist Ori Gersht. The exhibition will feature the artist’s latest body of work, Floating World, a series of photographs that capture water reflections of ancient gardens in Buddhist Zen temples in Kyoto, Japan. On view in the adjacent galleries will be prints and a triptych video installation from the 2014 series, On Reflection.The exhibition marks the United States debut of the Floating World series, which the artist began in 2015. In the work, Gersht seeks to reflect the natural elements and spiritual character of Kyoto’s Zen gardens, which are both real and metaphysical places. By focusing his camera on water reflections and later in post-production inverting his photographs and merging them with each other, Gersht creates new spaces that hover between material and virtual realities.

George Billis Gallery is pleased to present “The Cityscape Show VI,” a group show of work by gallery artists and invited guest artists.

The Cityscape Show V is the gallery’s sixth exhibition of its kind. The show is a visual exploration of the environs we inhabit. Los Angeles is a unique city in many regards – in its architecture, geography, and natural environment. Spanning a space that includes mountains, ocean, and desert, Los Angeles and Southern California are a source of immense inspiration to many artists. This exhibition brings together a group of artists whose individual works together to show a multifaceted and fascinating city.  These pieces illustrate the ever-changing urban landscape.  From the downtown skyscrapers and iconic landmarks to the graffiti-ed back alleys and vast freeway networks, from the bright lights of the Hollywood Hills and clean lines of mid-century modern architecture to the train bridges and gritty rail yards, Southern California is striking in all its extremes.

exhibitions, New Rome, an exhibition of new work by Kansas-based artist Kris Kuksi and Textures of You, a solo show of recent works by New York-based artist Ben Charles Weiner.

The exhibition marks Kuksi’s second major solo show with the gallery. Over the last decade, Kuksi has built a career creating complex sculptures that blend antiquity with the modern world. Teeming with struggle, conflict, faith, sexuality, and power, each sculpture affords the viewer a ringside seat for a wild spectacle as the spheres of fantasy and reality collide.

Concurrently in Gallery Two, the gallery also present Textures of You, a solo show of recent works by New York-based artist Ben Charles Weiner. For this exhibition, Weiner has taken inspiration from synthetic body enhancement products such as hair gel and silicone, to create vivid paintings that reflect a cultural obsession with resisting our physical and mortal limits. 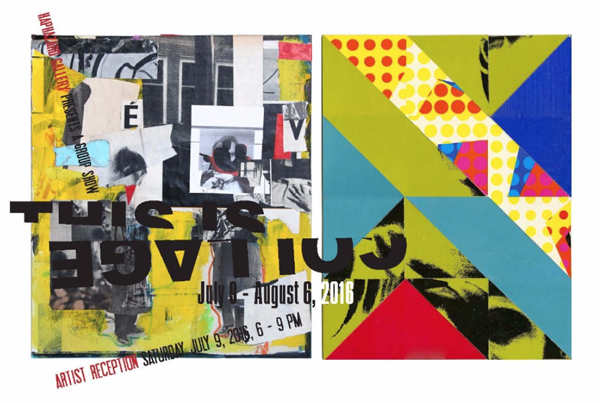 haphazard presents a group show of collages titled “This is Collage”. Whether made with scissors and paste, or in a manner more technologically advanced, this group show will juxtapose a collection of new collages made by emerging artists within the context of the 21st century. In the Information age where information and images are ever present perhaps these new collages can reverse our relationship with the culture of images from information back to the poetics. 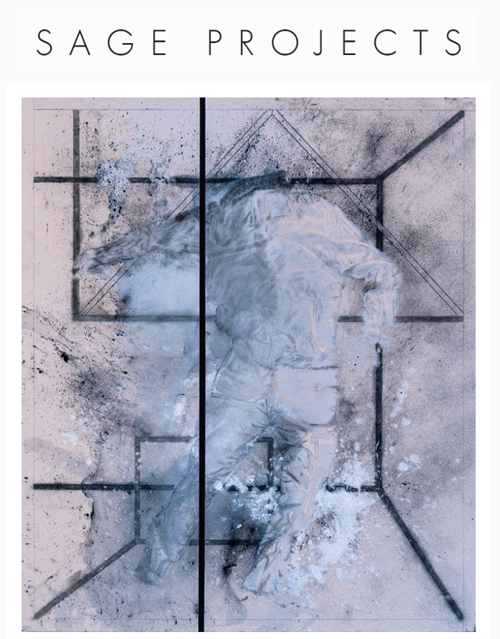 SAGE Projects is pleased to present an all new body of work by Vienna-based artist Michael Lukas in his solo exhibition “The Sun Ain’t Gonna Shine Anymore”.  A monochromatic series of paintings and works on paper, this exhibition challenges the viewer to consider alternative methods of perception, while evoking a reflection on transcendence and space.

The pieces in this exhibition share a common spatial , architectural makeup, with plays on dimension and inversion. Exuding the erratic ornamentation of Pollock, with the distinct structure reminiscent of Mondrian’s grids, Lukas’ practice seems to ride a fine line between the calculated and the complex, the visceral and the voracious.

Hop over the river…Lots going on downtown… 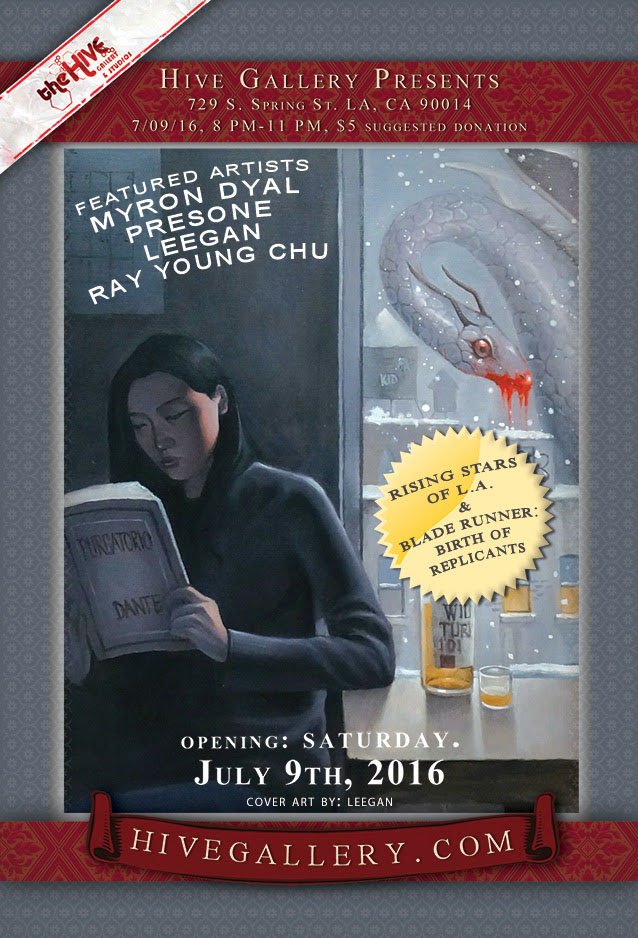 July is a month of discovery at the world renowned Hive Gallery. The gallery is spotlighting several artists in its Rising Star show and a large group show of artists new to the honey pot.

Amongst artists featured in the main gallery will include a large installation by artist Myron Dyal, who’s life-sized installation sculptures are direct visions from his lifelong affliction with epilepsy. Also on view is “7 Rising Stars of LA,” a large group show of artists brand new to the gallery, and a Blade Runner “Birth of the Replicants” themed show (curated by Trek Lewis).