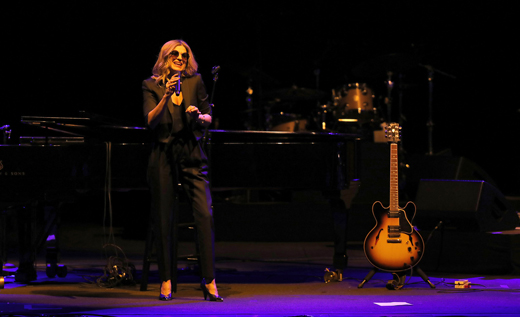 This week, the Hollywood Bowl held court to some stompin’ blues and jazz when up and coming artist Melody Gardot opened up for the legendary Van Morrison.

Melody Gardot has overcome adversity throughout her life. Blessed with a beautiful voice and insight as a songwriter, she overcame a life-threatening bicycle accident early in her career. Confined to a hospital bed for a year, she needed to relearn simple tasks and encouraged by a physician who believed music would help heal her brain, she learned to hum, then to sing and eventually to write songs. Since 2007, she has released four albums with a blues, jazz-oriented style that was on clear display during her five song opening set where Gardot demonstrated that she is a truly original artist with a lot to say.

Of course having been inducted into the Rock & Roll Hall of Fame, the Songwriters Hall of Fame and receiving a knighthood, Van Morrison needs no introduction. He is widely admired by musicians, critics, and fans all over the world. 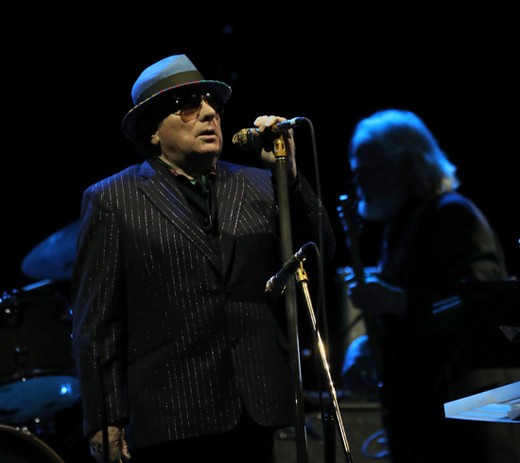 I’m not sure if Sir Van was in town to promote the upcoming October 25th release of his 41st album Three Chords and the Truth or his most recent album The Prophet Speaks, released last December. Either way, the man is clearly on a roll having released six albums in just the last four years. And, while The Prophet Speaks, followed the template of his two previous albums in mixing his songs with various blues, jazz and R&B nuggets by other artists, Three Chords and the Truth features 14 new Morrison originals.
His latest band includes two women and five men and features Jay Berliner, the veteran jazz and pop guitarist who was featured on Morrison’s 1968 Astral Weeks album. The band took the stage in classic soul review style by playing the opening song and then after a minute, invited the crowd to welcome “Sir Van Morrison”. Unfortunately, Morrison never introduced his band, but I managed to find out it included bassist David Hayes, Paul Moran on trumpet/piano, Dave Keary on electric guitar,Teena Lyle on percussion as well as an unnamed drummer and backup singer.

Wearing his trademark shiny dark suit with red glitter stripes, dark sun glasses and an aqua blue trilby, Morrison resembled the Duke Silver persona from Parks and Recreation. He grabbed the microphone and broke into Eddie “Cleanhead” Vinson’s 1947 classic “Gonna Send You Back to Where I Got You From” from The Prophet Speaks. The song allowed Morrison to promote his album, highlight one of his influences and show the crowd know that his voice is still a thing of beauty and one of the most recognizable and delightful in rock music. 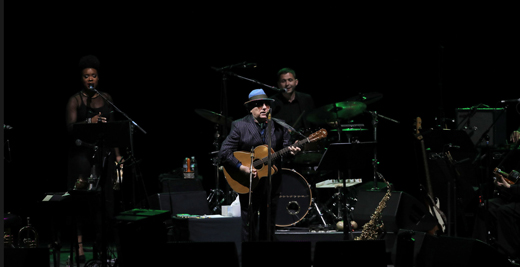 Morrison slowed the band down for the next number “It Once Was My Life” from his 1997 outing The Healing Game. That soon gave way to a little trip down memory lane when Morrison played his classic Saint Dominic’s Preview followed by a medley of Baby Please Don’t Go / Parchman Farm / Don’t Start Cryin’ Now that was driven by acoustic bass, electric and acoustic guitars, drums, percussion/vibes, piano, the phenomenal backup singer and Morrison on harmonica. He recorded two of the songs with his band Them in 1964 and they show off more of his influences: Muddy Waters, Mose Allison and Slim Harpo.

For the title track off his 1995 album, “Days Like This,” Morrison picked up the saxophone and traded off solos with his pianist/trumpet player Paul Moran which revealed that just like on harmonica, Morrison is a solid soloist that plays with a lot of feeling. Throughout the night, it was evident that Morrison was having fun as he sometimes shouted out to members of the band while they were soloing and gave his stellar band a lot of solo time. The band members switched instruments frequently with electric guitarist Dave Keary playing several electrics, an acoustic and two lap steels, while bass player David Hayes moved back and forth from electric to acoustic, trumpet player Paul Moran also played piano and Van himself played harmonica, sax and acoustic guitar. One particular moment when the band shined was on Morrison’s original “Ain’t Gonna Moan No More,” from his recent The Prophet Speaks album. During this number, Morrison invited the band members to solo and each of them in turn, the guitar players, percussionist Lyle and the trumpet player Moran took turns before Van closed it out on sax. 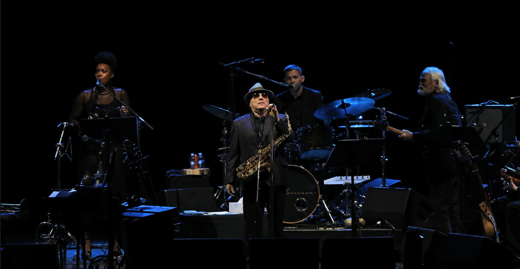 Morrison went back and visited his Days Like This album later in the set when he performed a medley from the album featuring “In the Afternoon,” “Ancient Highway,” and “Raincheck.” Morrison ended that medley with the song “Sitting Pretty,” where he relied on the two female vocalists to harmonize on the title each time it came around. As the long medley was coming to the end, the band kept playing getting quieter and quieter and it felt it like Morrison was going to walk offstage, but, he didn’t. In fact, the band returned for the classic jumping blues, “Help Me” by Sonny Williamson before seguing into a couple of deep tracks from Morrison’s 1968’s classic, Astral Weeks – “Beside You” and “Ballerina”. On the latter song, Moran on trumpet and Lyle on percussion performed impressive solos, but, it was Berliner seated on a chair with mutton chops and puppy dog eyes looking up at Morrison as he soloed on his Spanish acoustic guitar ending his extended solo with a fast, frenzied series of notes up and down the neck that got the crowd excited and brought a smile to Morrison’s face.

Sir Van saved his most popular songs for the encore playing “Brown Eyed Girl” and “Gloria. With the crowd on its feet, he dug deep into the song with all the glory of his earliest of days as the crowd spelled out the name with him, “G-L-O-R-I-A.” Then, Van the man left the stage as Paul Moran said to the crowd “Let’s hear it for Sir Van Morrison” – but, in true soul revue band style, the band kept playing “Gloria,” with all 7 members taking solos before it ended.

See https://www.hollywoodbowl.com to find out more about upcoming performances.