After a long shutdown, I was vaccinated and thrilled to venture out to see live theatre for the first time in over a year. The Wallis has created a Covid-safe outdoor stage with socially-distanced tiered seating. The World Premiere of “Tevye in New York!” officially opened on June 26, 2021, and stars actor/writer Tom Dugan (“Jackie Unveiled,” “Wiesenthal”), who also co-directed it with Michael Vale. Dugan has written several one-man shows, two were previously performed at the Wallis, with this production originally scheduled for 2020. So it was the perfect project to launch SUMMER @ THE WALLIS. 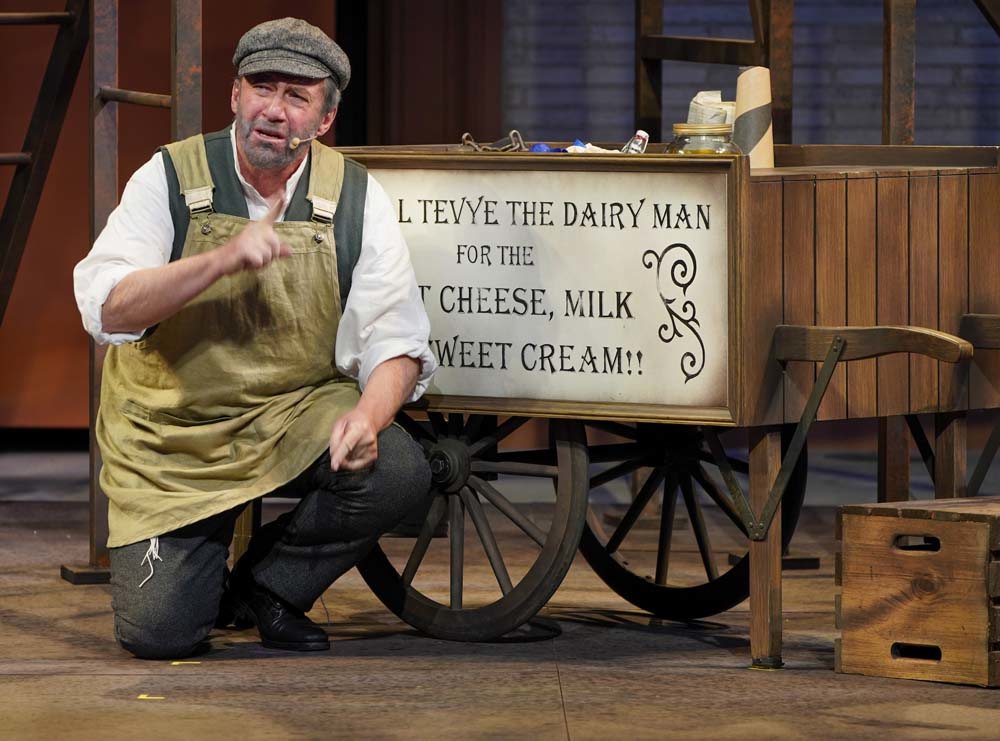 Tom Dugan as Tevye from “Tevye in New York!” at The Wallis Annenberg Center for The Performing Arts in Beverly Hills; Photos by Lawrence K. Ho

Most know the beloved character Tevye from the popular movie “Fiddler on the Roof,” however author Sholem Aleichem was the man responsible for first introducing Tevye to the world in 1894. Many adaptations of his books have followed. Dugan did an exceptional job telling his version of Tevye’s life after “Fiddler on the Roof.” He stayed true to this character, while drawing the audience in, allowing us to experience both the joy and tragedy of Tevye’s challenging life.

The show opens with Tevye setting up for a Fourth of July parade that would soon be passing by his place of business on Delancey Street, on the lower Eastside of Manhattan. Tevye greeted the audience, waving, and interacting with his neighbors. The year is 1914, and he has just become a proud American citizen.

Dugan was outstanding. He commanded the stage…allowing us to become part of the character’s neighborhood, while he weaved fictional characters in and around us. Dugan brought us on a journey of Tevye’s life, as he regaled the fictitious crowd (and us), with memories of the old country. A recap of the story of Fiddler reconnected us to the characters, while Tevye touted new tales of coming to America, his youngest daughters, and chasing his dream in New York City. Throughout the show, he held the audience’s attention with a promise of a big reveal at the end of the show. 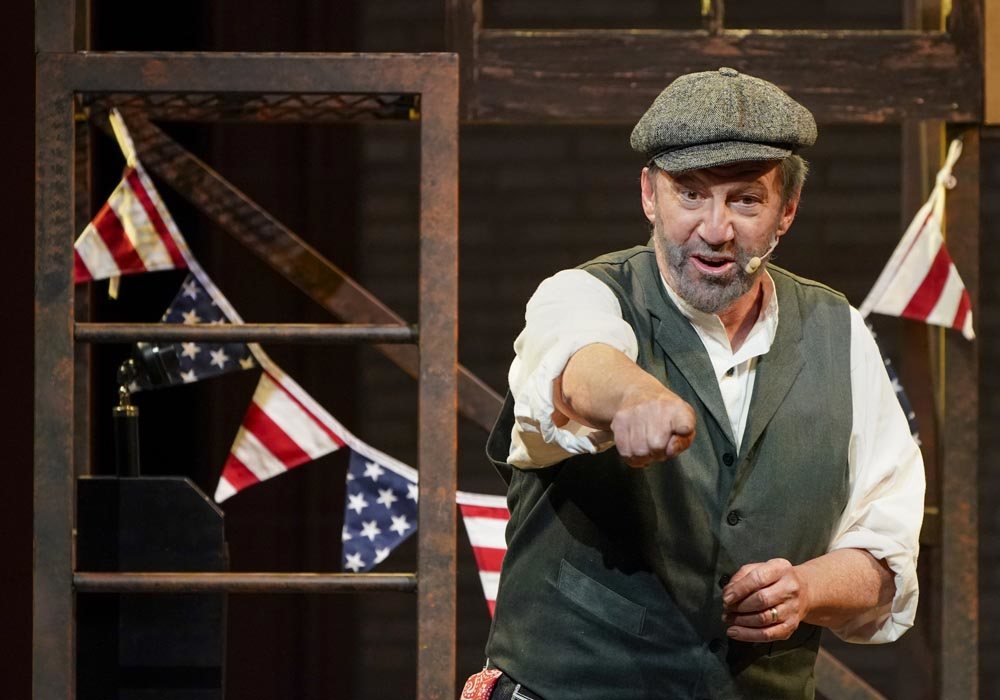 The play featured subtle nods as well as obvious tributes to previous adaptations. Throw away lines included song titles from Fiddler – “if I were rich man,” “Sunrise, Sunset” were snuck into the text. One of his imaginary characters that he conversed with throughout the show was a fiddler toting firecracker salesman who serenaded us sparsely throughout the performance.

The minimal set created by Michael Vale allowed for lots of movement – the actor was climbing up a ladder, sliding down a pole, or moving his milk cart to different parts of the set conjuring up a bustling street, while Tevye continued to set up for the 4th of July parade. The lighting by Elizabeth Harper was on the mark.

While Fiddler on the Roof offers a story of Tevye and his wife Golde attempting to hold onto tradition, Dungan’s one man show brings the character into an updated and ever changing future after he arrives in America. His new surroundings – New York, pose a more progressive outlook on life. As a writer, Dugan takes certain liberties while bringing in many of today’s issues – the plight of the immigrant, and his daughter’s sexuality. Both are resolved, which I can only say for myself felt implausible for 1914, even though as an audience member, I was relieved. Between the resolution of these conflicts and the big reveal, the show wrapped up into a celebratory close.

It was a fantastic night, and although attending live performances may feel precarious right now, many of us have longed for this moment. Despite new covid variants, the Wallis has offered a safe haven to view live theatre. 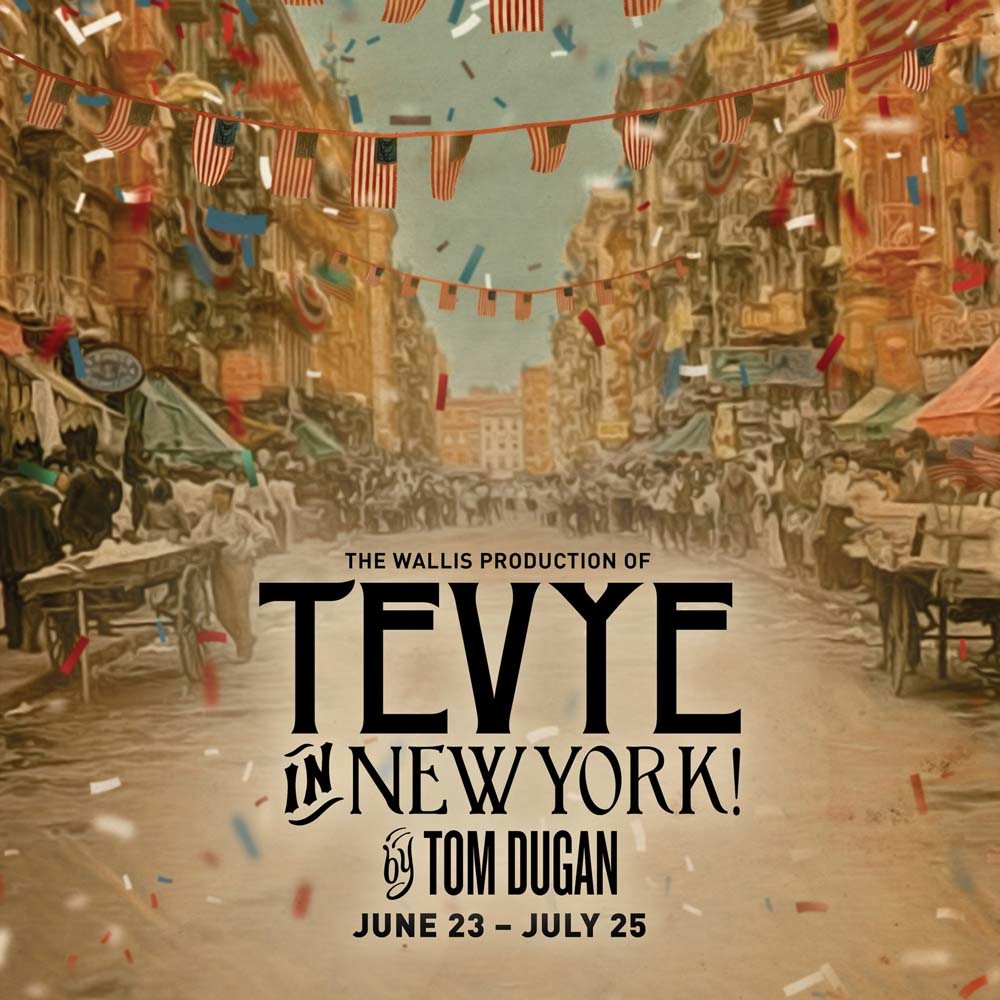