When I was 14 years old I fell in love with a tv character. Of course, I was unaware that I was watching reruns in the late 70s of the famed TV show “Star Trek.” I crushed hard on James T. Kirk, portrayed by actor William Shatner. I fantasized about traveling across the country (from NY to LA) to find my hero. Of course, since I was watching reruns, I would not have found the young, sexy captain of the U.S. Enterprise who I was visualizing in my dreams. 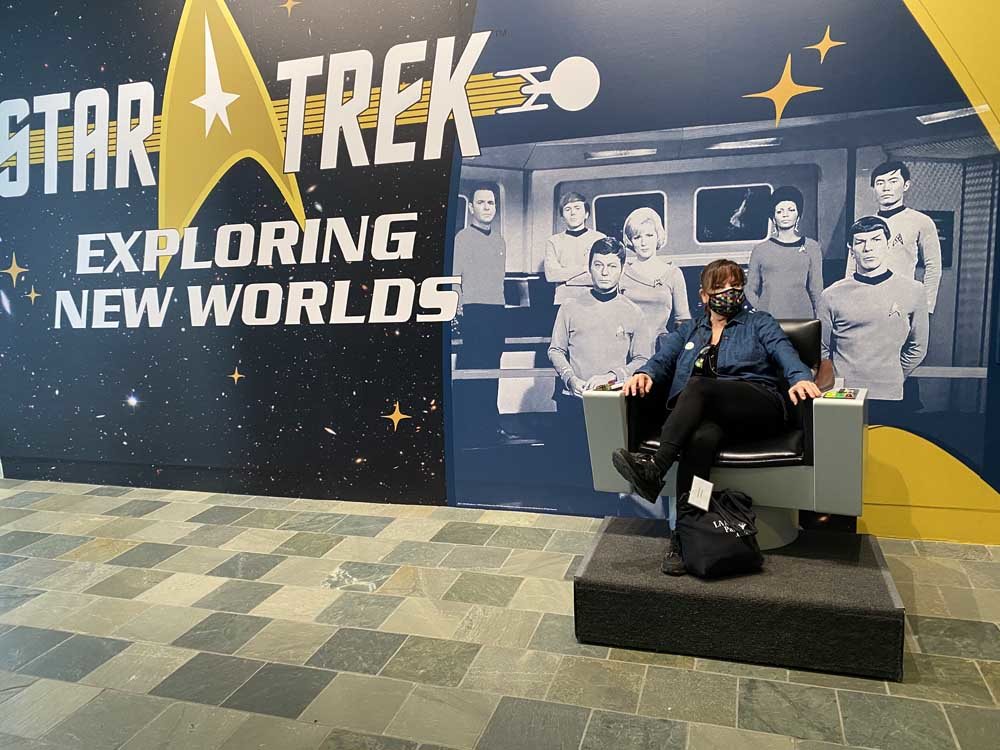 My affection for this cultural phenomenon was recently re-ignited at a press preview at the Skirball Cultural Center. A new exhibition “Star Trek: Exploring New Worlds,” organized by Museum of Pop Culture, Seattle, WA, along with CBS Studios Inc., and Paramount Pictures Corp., opens to the public on October 7, 2021. The exhibition includes items from all of the tv shows, and movies. You’ll find part of the set from the original series, among others, as well as spaceship filming models, costumes, scripts, and storyboards along with significant props such as the tricorder, communicator, phaser, and lots more 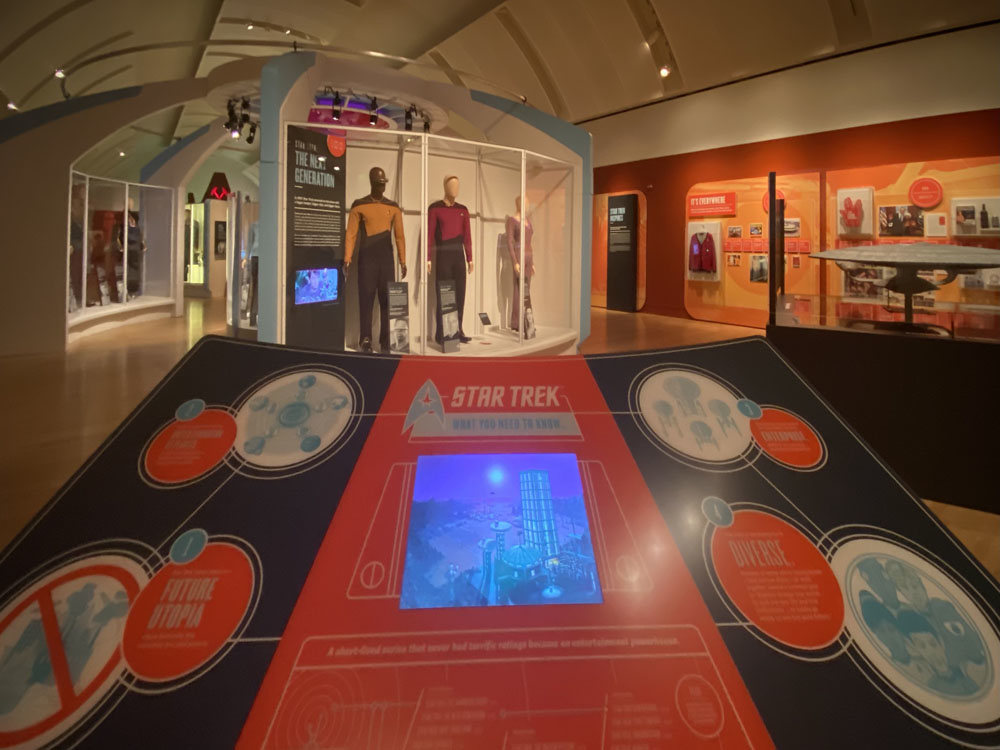 There are also many interactive installations where attendees can create their own show, or true Trekkies can do a deep dive into Star Trek history and search dates as well as the timeline of various episodes, when characters were first introduced, etc. Photo opts are available for all fans. At the entrance one can sit in the Captain’s chair with a life-sized photo of the original cast behind you. Scotty can also beam you up. While posing with a phaser in hand on the transporter, be sure to have a friend film the monitor as you disappear into thin air.

Star Trek was light years ahead of its time. Created by visionary Gene Roddenberry, the low budget compelling science fiction tv show celebrated inclusivity – all races, all genders, all ages, while teaching tolerance. These compassionate, human stories drew us in and overshadowed its naive special effects, that are now quite laughable. The series was not originally received well, when it was first aired, but reruns spread the excitement of the series like tribbles – those cute purring balls of fur featured in one of its most popular episodes – “The Trouble with Tribbles.” 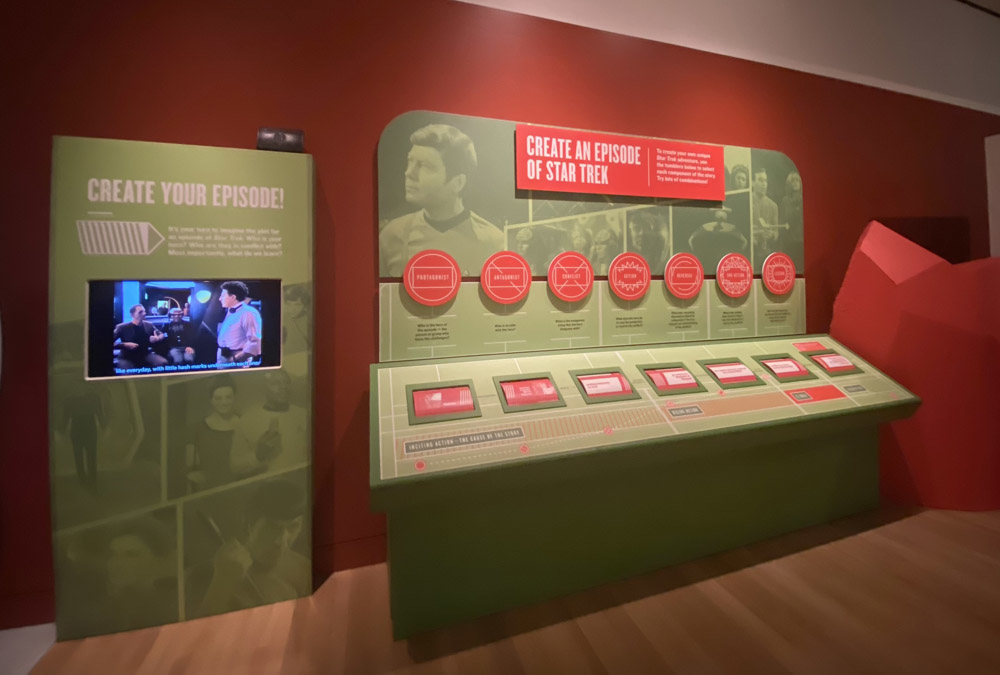 Fans, called Trekkies would soon gather at Star Trek Conventions (yes I was one of them), and guest appearances by the actors became the norm. Several spin-offs came out of the original series as well as six motion pictures featuring the original older cast. Then in 1987 “Star Trek: The Next Generation” aired much to the outrage of many trekkies (including me). However the new remake of series starring Patrick Stewart proved to win many of us over and lasted seven seasons. The franchise continued to grow and as of the publishing of this article includes seven television series, fourteen movies, and thousands of novels, comics, games, etc.

Whether you have been a fan from the very beginning, or you are just finding out about Star Trek, you should ‘go where no man has gone before…’ and experience “Star Trek: Exploring New Worlds” at the Skirball Cultural Center. This is an in-depth exceptional exhibition…one worth seeing. 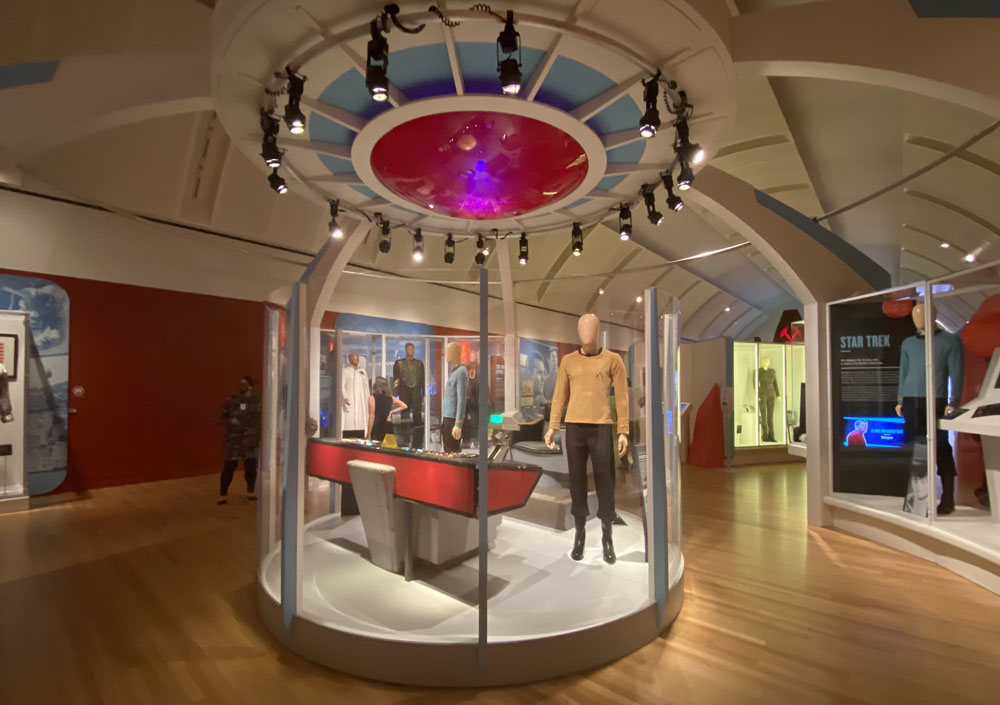 The public is invited to make appointments to view this exhibition starting on October 7, 2021 and running through February 2022. CLICK HERE to purchase tickets; No walk-ups allowed; Attendees must register for a time slot, and have proof of vaccination or a negative covid test in the past 48 hours. To find out about Skirball’s updated Covid safety protocols, CLICK HERE.

Admission is $18 for GA / $15 for Seniors, Students and children over 12 / $13 for children under 12 / Free on Thursdays; Skirball Members enjoy FREE admission to this exhibition and will be among the first to get to experience it—CLICK HERE to join or renew today!