Skip to content
Review: Night of 100 Solos: A Centennial Event

Written by Michael Baroff;    To commemorate the 100th birthday of Merce Cunningham, who died in 2009, the Merce Cunningham Trust co-produced Night of 100 Solos during which 75 dancers from around the world performed on three stages in London, New York City and Los Angeles. The 90 minute event at UCLA’s Center for the Art of Performance at Royce Hall featured works choreographed by Cunningham, performed by 25 dancers, many of whom were formerly with his Company, and accompanied by live music and large screen video projections. 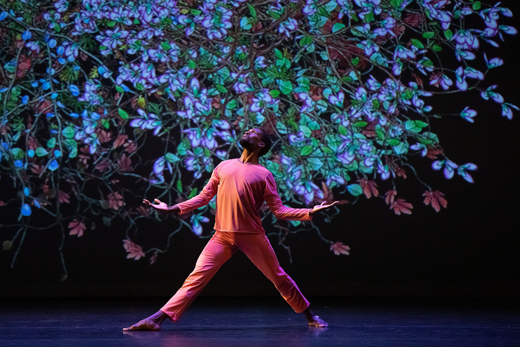 Though deemed solos, the dancers, clad in solid color body suits, continuously entered, exited and shared the stage with others as each dancer moved in their own individualistic Cunningham movement style.

Taken as a whole, I experienced the performance as a meditation, though not one disposed for inner calm, rather of being with sensory overload. The music was a blasting cacophony of often grating sound effects that surrounded the audience from all sides and the digital artwork background projected vibrantly colorful changing fractal-like psychedelic images of trees, fruit, and cloth drapery. With these auditory and visual inputs, the practice became to, perhaps most significantly, focus on appreciating the subtlety of the dancers’ movements, which modeled Cunningham’s technique that uses opposing physical forces in the body relative to the dancer’s spine to create unnatural bodily shapes that deceptively seem simple and effortless. Given all this, is it is interesting to note that the dancers “consistent with Cunningham’s methodology rehearsed in silence and only heard the live music accompaniment when they perform.”

To quote Merce Cunningham, “what you’re looking at, is what it is.”
This celebration reinforces Cunningham’s legacy with the expectation that his work will continue to be performed and appreciated. 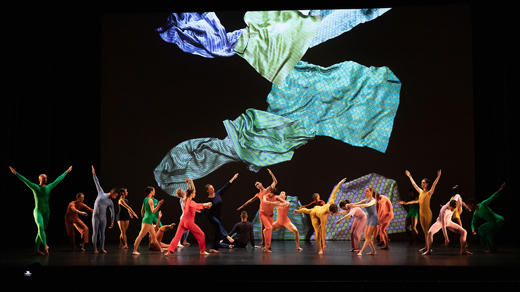