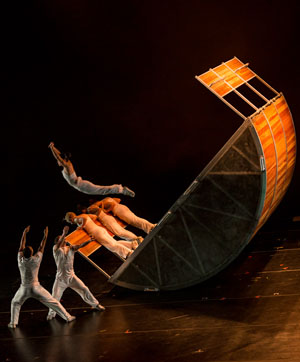 pening night of Diavolo Dance Theater’s premiere of Transit Space at the Broad Stage attracted an eclectic group of dance lovers. There were all types…young, old, couples, and the obvious group of confused men dragged along by their girlfriends. However, by the time the intermission rolled around…those same men had joined the ranks of the rest of the audience and were truly enthralled.

Diavolo Dance Theater is an internationally renowned modern dance company of dancers, gymnasts, acrobats, and athletes. The two pieces stood on their own: Trajectoire originally premiered in 1999 and was breathtaking…perhaps so much so it overshadowed the rest of the performance.

The sets played a leading role in the production. Set designers Daniel Wheeler (Trajectoire) and Sibyl Wickersheimer (Transit Space), along with set engineers Mike McCluskey and Tina Trefethen created artful and inventive detachable sets for the dancers to play on. The three-dimensional choreography was obviously inspired and developed further through the design of the sets. 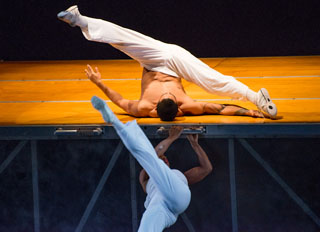 nks for the beautiful shots from photographer Ben Gibbs.

The “arc” from Trajectoire was the true star of the piece and the dancers played the role of supportive cast creating an undeniable work of art. The movement of the arc allowed the dancers to embrace the force of gravity and kept the audience at the edge of their seats…

The second act featured Transit Space premiering for the first time. Influenced by the documentary Dogtown and Z-Boys, skate ramps were used to enhance the dance moves, simulating jumps, spins and leaps one would make with a skateboard. 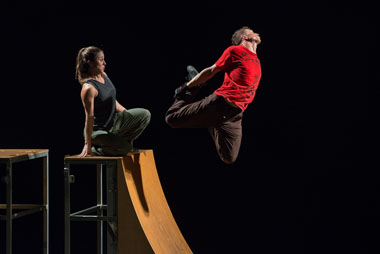 though it was extremely compelling, complete with an audio track featuring spoken word, it tended to lag at moments. Also at times the sets that were so original seemed to be a burden to the dancers as they pushed them around the stage. However, the finale took an energetic turn allowing for better usage of the slide-like sets. Next came exlaborate skateboard moves and jumps culminating in a thrilling ending.

Artistic Director Jacques Helm spoke after the show. An animated leader, he described the art of dance….”What we do on stage is like a live abstract painting with themes such as human struggles, fear, danger, survival, chaos, order, faith, love.” 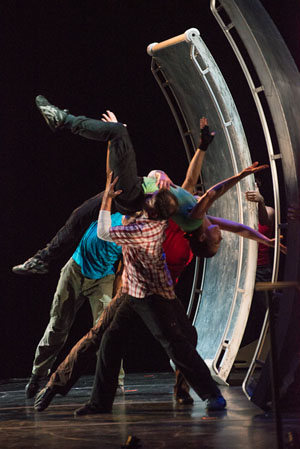 ng this company for the last twenty years, Helm continues to choreograph for other projects such as the Cirque du Soleil “KA” at the MGM Grand Hotel in Las Vegas.

Diavolo has been touring nationally and internationally for the last thirteen years. This is their third year at the Broad stage.

Visit the website to find out more about this terrific dance troupe – http://www.diavolo.org/