Skip to content
Review: Diavolo / Architecture in Motion at the Music Center

The renowned Los Angeles-based dance company Diavolo with their unique fusion of performance styles and elaborately designed and viscerally engaging sets brought their newest “adventure” Voyage along with their 2000 work Trajectoire to Gloria Kaufman Presents Dance at the Music Center.

During a talk before the performance Diavolo’s Founder and Artistic Director Jacques Heim and Merritt Moore, a professional ballerina and quantum physicist explored the science behind Architecture in Motion as well as what it takes for the performers to succeed in their extraordinary physicality. First off, Heim considers what he choreographs not pure in any one form, but rather a fusion of circus, acrobatics, modern dance, ballet and treats his performers as “gladiators” who must expand themselves beyond fear and pain and willingly be put into dangerous situations to be able to “conquer anything they want” both physically and emotionally, not only individually but most necessarily as a cohesive team.

Moore in speaking of the rigor of having been in the astronaut selection process drew the comparison with the dancers as having to be fully alert all the time to survive. As a physicist she also found herself viewing Diavolo’s work through the perspective of the pure mathematics of movement in terms such as torque, vector force and trajectory.

Heim spoke to the essentials that drive his creative process to answer three core questions: How is everything started?; What are we doing here?; and Where are we going? This intellectual curiosity overlays his development from growing up a rebel running and jumping through buildings and discovering and appreciating the universal language of movement that transcends verbal communication. He reinforced his emphasis on the need and importance of teamwork and related his the experience of being in Los Angeles during the earthquake during which people, in a state of emergency, instinctively work diligently together to survive.

With or without all this in mind, the audience is immediately drawn into the performance by the magnitude of the stage sets to become deeply absorbed in the story played out in each work as portrayed through the power, strength and focus displayed by the performers. In Voyage, inspired by space travel and the 50th anniversary of the moon landing, we follow a young woman who escapes through a door, reminiscent of the Twilight Zone. She enters a surreal landscape populated by aliens with whom she interacts with kinetic energy, gravity defying leaps, and soulful playfulness on and through transforming architectural structures. Throughout the piece we experience changing emotional tones as she and we discover meaning in what is ultimately a pulling back to an everyday reality that is verbally expressed as “a deep current of belonging.” 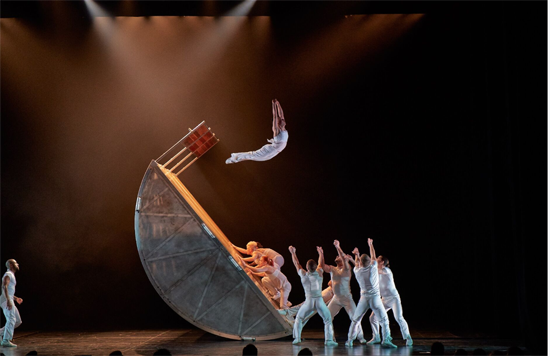 Trajectoire, more lyrical in tone, presents the ebb and flow of the human experience as the performers struggle to maintain balance on a ship-like structure that teeters in waves to and fro as the performers leap on and off and precariously under it to ultimately transcend peril to survive again the odds.