LAArtParty was lucky enough to be invited to the opening night gala for Photo L.A. 2020, held this year at historic Barker Hangar at the Santa Monica airport. Photo L.A. is the longest running international photographic art show on the West Coast, and is dedicated to linking collectors and dealers with a gamut of galleries from all over the globe.

This year’s opening night gala was a benefit for Venice Arts, an awesome organization whose mission is to ignite, expand, and transform the lives of Los Angeles’ low-income youth through photography and film education and amplify the voices of underrepresented communities around the world. 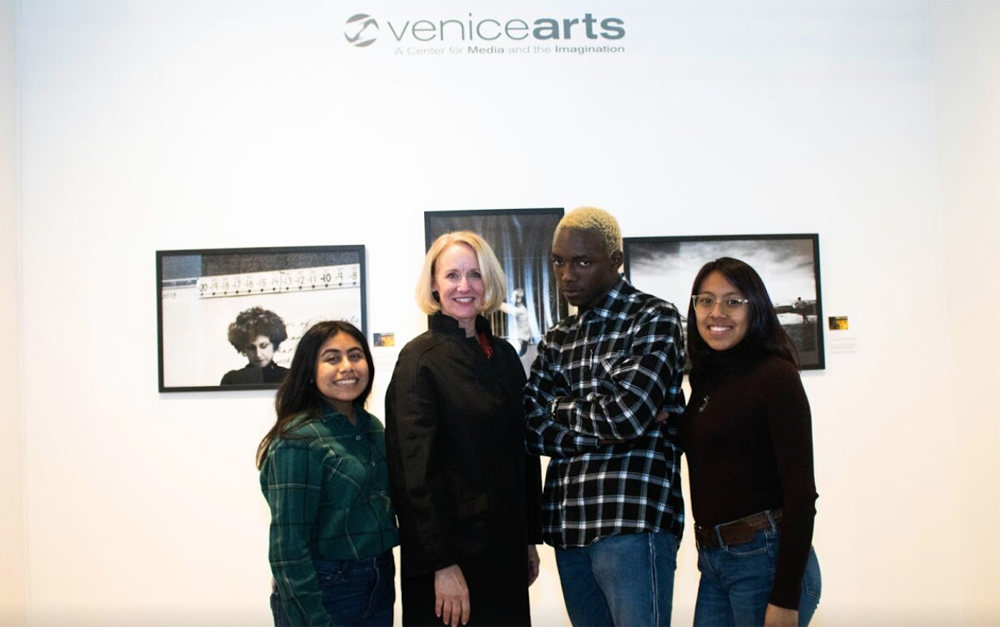 The Venice Arts exhibit featured a variety of street scenes and other iconic Los Angeles images by various Venice Arts students, including really nice surfer photos taken by Mark Tomilin in 2015 when he was 16. He said, “Initially for me, photography was a communication device while I was developing my English.  Now it’s transformed into my personal canvas.”

dnj Gallery had a group show exhibit consisting of work by numerous artists, including Darryl J. Curran, one of the leading conceptualists of Southern California photography, whose distorted images and experiments with light seek to re-define the very definition of photography.  Pamela Schoenberg, owner and director of dnj Gallery, primarily works with photo artists who bring new ideas and ways of looking at the world to their art and make it an outlet for innovation and reflection. 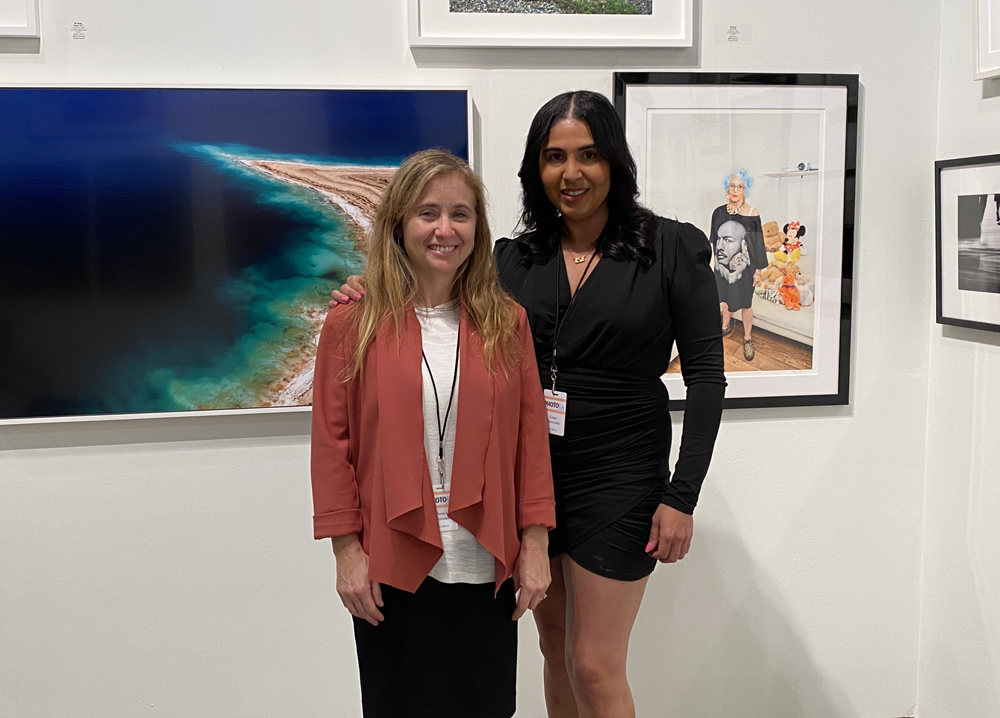 One of the other artists in the dnj Gallery exhibit is Corey Grayhorse, who uses bright colors and pop images to elicit emotional and social responses. Corey says “Color and wonderment is a consistent thread throughout my work. A wide-ranging influence of styles in art, photography, and fashion combined with traditional and pop culture influence my perspective.”

One of my personal favorite items was a group of photos in the Art 3 Gallery exhibit. It consisted of a series of diptychs from a book called “162 Grams” by a cinematographer/photographer named Adolfo Doring, who put 162 images on Instagram and asked the public to decide which images should be joined in his diptychs. The results are quite interesting. 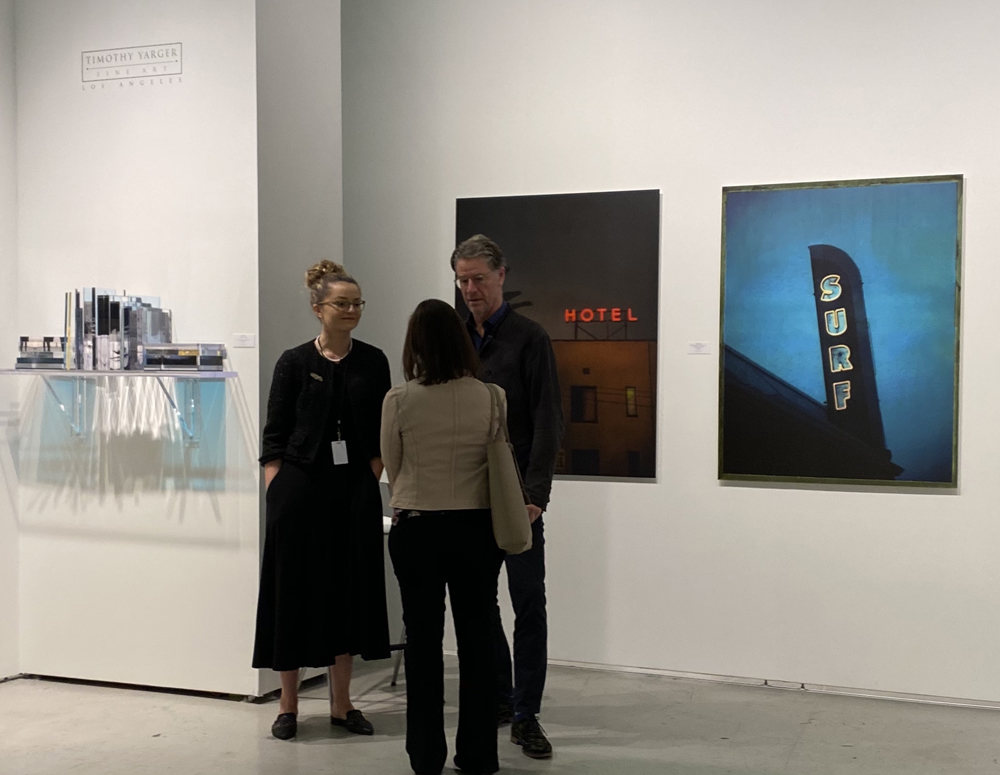 Another personal fave was Willem Photographic, which is headquartered in Monterey and featured exquisite vintage photos of old celebs like Shirley Temple and Marilyn Monroe, as well as a lot of other vintage works.

Berman Arts Agency showed the work of Bonnie Schiffman, a celebrity photographer who specialized in actually going to celebs’ houses or having them come to hers for the photo sessions, and of using personal items and unusual poses in her photos of them.  See her shot of George Burns in a bathrobe (below).

Many other galleries exhibited wonderful work at the show, including a few from China, such as the SE Gallery, which showed some whimsically fractured photos of modern China by Hu Weiwei that I liked a lot. Other highlights were the Gallery XII Los Angeles photos by world-renowned Milanese photographer Paolo Ventura and Susan Spiritus Gallery’s photos by Jane Szabo of weird surrealistic houses. Find out about next year’s event on the website – https://www.photola.com/ 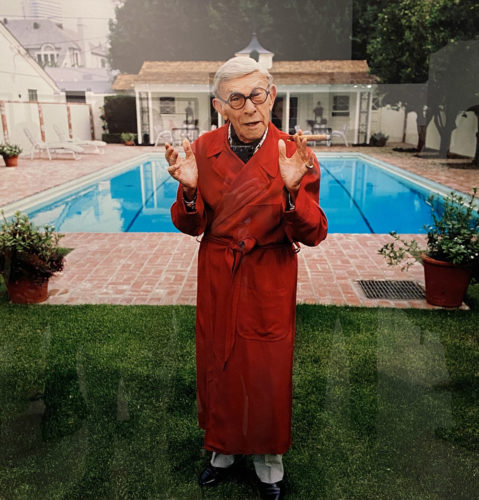