Our day began on the field of the Historic Pasadena Rose Bowl on May 7th for the 2nd Annual Masters of Taste, a luxury food and beverage festival. 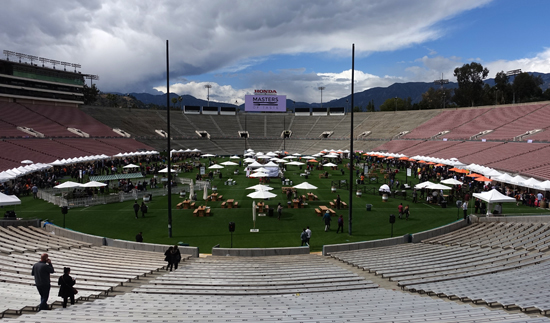 It was a sunny day at first, but then the clouds rolled in, the sky grew dark, and suddenly heavy rain, thunderstorms and lightening ensued! Luckily I had my umbrella so it barely put a damper on our afternoon. Then just as quickly as the rains came, the sky cleared and the sun was out once again. On this interesting afternoon, to say the least, from 3 PM to 7 PM, we sampled and enjoyed some of LA’s finest fare from 40+ restaurants, and 25+ craft beer, cocktail bars, wineries, and breweries as unlimited tastings were served to all guests. Proceeds to benefit Union Station Homeless Services, an organization committed to helping homeless men, women and children rebuild their lives.

Here are some highlights from our favorite culinary offerings. Our first taste of the day was a flavorful and tender steak served with fresh basil and delicate dressing from the Bacchus Kitchen of Pasadena. 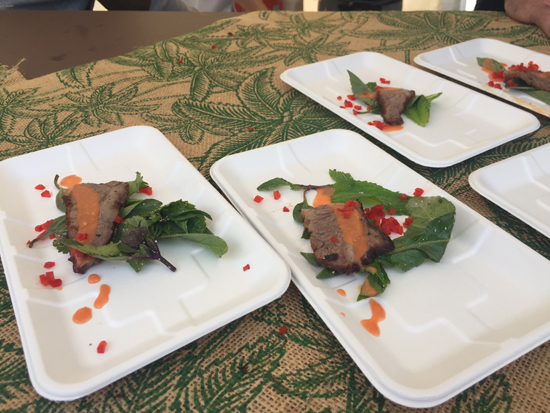 We also enjoyed a glass of the 2013 Cabernet Sauvignon Gold Medal Winner from Vine Mark Cellars which was delicious and well balanced with flavors of rich blackberry and currant. The crab roll with dill from the Venice Whaler was delicious. We paired it with the 2016 Sauvignon Blanc from Robert Hall of Paso Robles. It was refreshingly dry and medium-bodied with a rich crisp acidity. Also went well with the spicy Ahi tuna mixed with scallions, sesame seeds and spicy sauce from Hoke Poke of downtown Los Angeles, another favorite. Next the tomato soup topped with creme fraiche from Celestino of Pasadena was light, yet had intense tomato flavor. The cold summer squash soup from Mexikosher of Los Angeles, was sweet, yet spicy with jalapeños; a crowd favorite. Mexican? Kosher? it works! 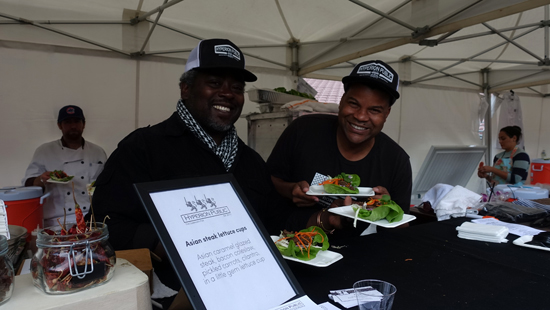 The Asian steak lettuce cups with caramel glaze, bacon coleslaw, pickled carrots, cilantro and a little gem lettuce cup were very delicious from Hyperion Public of Silverlake and Studio City. The Korean inspired fried chicken wings topped with sesame seeds from Belly Bombs of Artesia were sweet and spicy and full of flavor! The beef carpaccio with tonnato fennel tops and blossoms were yummy from Louise’s which has three locations: Santa Monica, West LA and Larchmont Village. Another stand out was the Soupe de petit pois called Spring – English pea soup with mint and pea tendrils – tasted exactly like its name! From Church and Sate of downtown Los Angeles.

And now for some amazing desserts: Sprinkles cupcakes of Beverly Hills were delicious – I couldn’t choose between the red velvet or the dark chocolate so I ate them both! The bacon doughnuts from Cafe Dulce of Little Tokyo in downtown Los Angeles and also Alameda Street – yum! 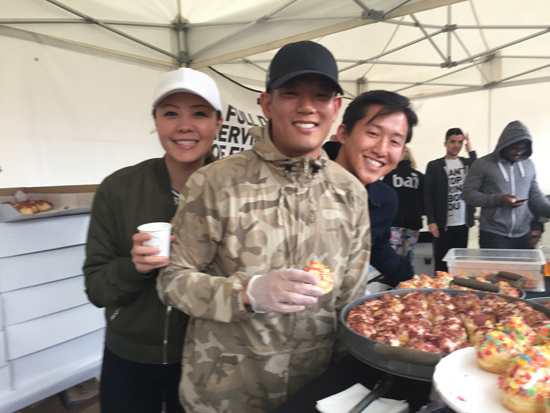 And Helados Pops Icecream of San Fernando came in unusual and exotic flavors like Horchata and Tamarindo – cool and refreshing! A great way to end an awesome afternoon…and not a cloud in the sky. Be sure to check the website so you don’t miss next year’s event. https://mastersoftastela.com/