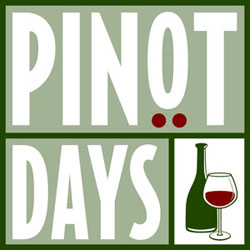 As part of Pinot Days in Santa Monica, there was a public tasting from dozens of regional and international Pinot noir wineries at the Barker Hangar.

Pinot Noir, the most beguiling of all the grapes, is named for its dark color and pine cone shaped bunches, first grown in the Coat d’Or region of France. When I read a quote on Wikipedia from Vanity Fair describing Pinot noir as “the most romantic of wines, with so voluptuous a perfume, so sweet an edge, and so powerful a punch that, like falling in love, they make the blood run hot and the soul wax embarrassingly poetic,” and the description of pinot as “sex in a glass,” I thought that we were in for an interesting afternoon.

We picked up our huge globe shaped wine glasses at 1:30 pm and started the sip and spit event. OK, I didn’t “spit” as much as I perhaps should, but I did pour out some good wine. We wandered around the huge hangar looking at the more than 100 wineries gathered for the event before presenting our glasses to the Derby Winery near San Simeon, for a splash of a sparkling $20/bottle 2010 Pinot Gris. Fantastic. Could have stayed at that booth all day. But there were many other wine to taste. Next we visited a winery from below the Russian River, Fog Crest, and tasted a memorable 2009 delight ($49 per).

We tasted a great PN from a local vintner, The Malibu Vineyard. A curiosity at the event was a booth for Farm Fresh to You, a certified organic grower based locally, that will deliver a box of vegetables to your door for $33. I briefly stood in line for a pretty labeled wine before moving to a shorter line at the Thomas Fogerty winery where I tried three of their tasty offerings the most memorable being the $30 a bottle 2009 “Santa Cruz.” The Saintsbury had some $45 per bottle that were tasty. Other memorable pinots come from the Morgan Winery in Salinas, a pleasant PN for $20/bottle from Meiomi. Kenneth Volk poured a tasty sip from his Santa Maria Valley winery Oregon, was represented by the wineries of Winderlea and Amalie Robert Estate. 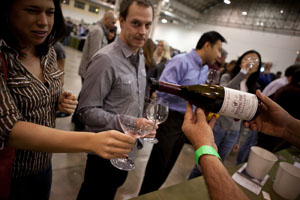 Then I came to the wine that would make me “wax embarrassingly poetic.” A relationship in a glass – I wanted to buy it dinner, take it on long walks on the beach, meet my parents – Daniel Moore of Peter Paul wines served three tremendous wines: Gravenstein Hwy, the Mill Station Rd and my fave of the show, the Trenton Rd. All from 2010 in the $35-$40 range. Also of special note was a wine from Papietro Perry!

All in all it was a fun afternoon at Barker Hangar. I staggered out with more knowledge and a love for Pinot Noir than I had going in. My strategy to park more than a half mile away helped in getting my legs under me before driving, in addition to saving the $10 valet charge.