Skip to content
Pick of the Week…this Sat, Nov 2nd, “Martin Mull: State of the Union” at Samuel Freeman!

Yes it’s Halloween week…If you are not worn out from last weekend…(Yeah Mama went to about 5 costume parties), then get out there kids and keep it going….

In the meantime, let’s get back to art….

My Pick of the week is “Martin Mull: State of the Union” which opens this Saturday, November 2nd at Samuel Freeman in Culver City. Best known for his TV and Film roles, Martin Mull is also an established artist. A triple threat in the arts and entertainment world, Mull has spent most of his life working in three mediums, acting, singing and painting. He became active in the art world since the 1970s, when his work was included in many group and solo shows. 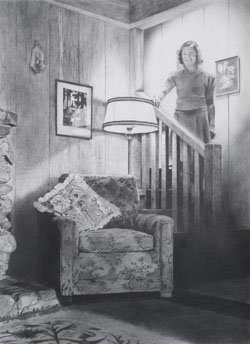 Supported by many of his “Hollywood Friends,” Mull’s piece “After Dinner Drinks, 2008) graced the Album cover of Steve Martin and Edie Brickell’s “Love has come for you.”

Combining large oil on linen paintings with more intimate graphite on paper works, State of the Union is Mull’s fourth solo exhibition with the gallery.

Peeling back the veneer of collective perception, Mull’s images offer a glimpse through the cracks in the quintessential postwar “American experience.” Navigating a deeply psychological terrain with satire, dark humor, melancholy, and mid-century cultural reference, Mull’s new images are held together by formalist concerns of painting and traditional picture-making. Rockwellian at a glance, Mull’s vignettes are moody fusions of displaced characters, culled from period-specific popular magazines, found family snapshots, and vintage nudist publications. 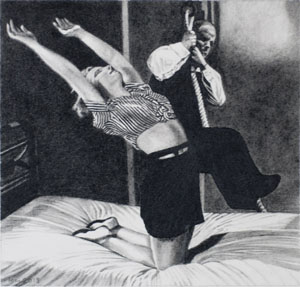 This exhibition is Mull’s first to feature a full suite of graphite drawings alongside his paintings. While the cast of figures and settings overlap – trapeze artists, salary men, matrons, nudes, and wholesome teenagers, the two distinct mediums tell subtly different stories. The light, gestural, momentary glance of graphite on paper hints and jokes, while in the oil paintings an eerie chiaroscuro merges with a restrained paint-by-numbers abstraction to create studied, brooding narrative tableaux.

Cast here in grisaille tones with varying levels of collage-like photorealism and pictorial singularity, Mull’s scenes explore the uncanniness of hindsight to reveal a convoluted sense of nostalgia. In Mull’s words, the works convey a sense of comfort that is then betrayed, as if to say: ‘It’s safe, come on in.’ Then you hear the door slam behind you.”

Martin Mull (b. Chicago, 1943) lives and works in Los Angeles. Raised in Ohio, Mull holds both a BFA and MFA from the Rhode Island School of Design. Exhibiting consistently for over thirty years, his work can be seen in the permanent collections of the Metropolitan Museum of Art, LACMA, The Orange County Museum, The Walker Art Center, The Whitney Museum of American Art, The Brooklyn Museum and the Total Contemporary Museum of Art in Seoul, amongst many other prestigious collections.