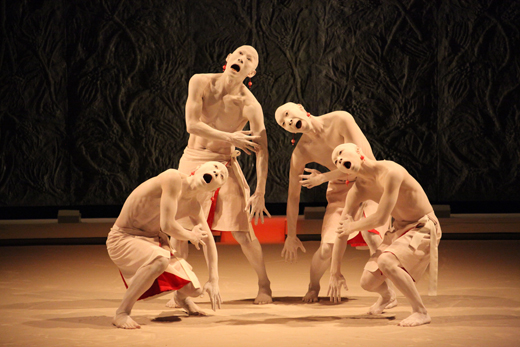 A much-anticipated event in the North American dance landscape, Sankai Juku will return to Royce Hall with Ushio Amagatsu’s latest work, “Meguri: Teeming Sea Tranquil Land.” Ushio Amagatsu and his all-male, Tokyo based company are known for their elegance, technical precision and emotional depth. This beautiful new work is a poetic meditation on the passage of time as symbolized by the circulation of water and the seasonal transformation of the earth. Sankai Juku premiered “Meguri: Teeming Sea, Tranquil Land” at the Kitakyushu Performing Arts Center in Fukuoka, Japan in March of 2015.

Amagastu describes the meaning of Meguri as “… a phenomenon like circulating water and all things that rotate.” Set against an upstage relief of sea lily fossils, Meguri: Teeming Sea, Tranquil Land is a meditative visual poem. The term “Butoh” means “dance of darkness.” Embracing the contemporary side of Butoh, Sankai Juku has been described by the New York Times as “one of the most original and startling dance theater groups to be seen.” As one of the premier choreographers today, Amagatsu’s contemporary Butoh creations are sublime, visual spectacles and deeply moving theatrical experiences.

Funds for SANKAI JUKU’S MEGURI were provided in part by the Japan Foundation Los Angeles and the Doris Duke Charitable Foundation Endowment Fund.