Skip to content
Review: Sankai Juku MEGURI at UCLA Center for the Art of Performance

In Meguri – Teeming Sea, Tranquil Land, the internationally renowned Butoh dance company Sankai Juku, founded by Ushio Amagatsu in 1975, enraptured the audience at UCLA’s Royce Hall into experiencing a “different way of being.” The word MEGURI refers to the phenomena of circulating water and all things that rotate within the order of a system such as the passage of time and the seasonal transitions of the earth. Captivated in watching the performers’ elegantly slow, precise and intensely expressive movements we entered a meditative realm to reflect on these experiences in an intimate manner. 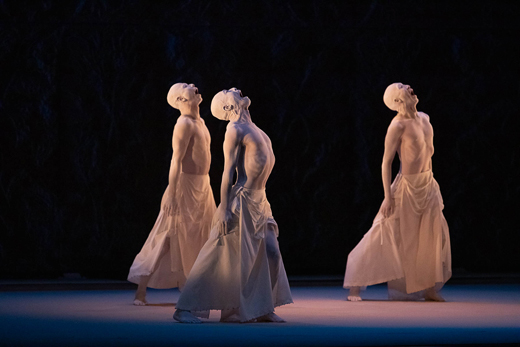 Amagatsu defines his approach to Butoh as a “dialogue with gravity” to explore an internal nature that is universal to all human beings. As the term Butoh also means “dance of darkness,” it is understandable that the dancers, with undulating movements and silent open mouthed outcries, portray a sense of seeming desperation, often looking to the heavens for what may be guidance. Notable also is the feeling of isolation, for though collectively the dancers appear similar in appearance and move in consort, they mirror and pass each other not physically connecting.

The musical score by Takashi Kako, YAS-KAZ and Yoichiro Yoshikawa beautifully complemented the dancers’ movements by evoking ancient, ambient and spacious sonic landscapes. Further establishing a timeless quality within the dancers’ environment was the background stage art, Realization of Sea Lilies by Roshi, which was created in the image of fossils of the Paleozoic marine creatures known as sea lily or crinoids. There were moments while I was immersed in this dreamlike world that I had flickers of my own memories. As I quickly came back into the moment I felt a deeper connection to the humanity being presented on stage. At the conclusion of the performance, with the audience’s extended standing ovation, I knew I was not alone in having had a profound experience. 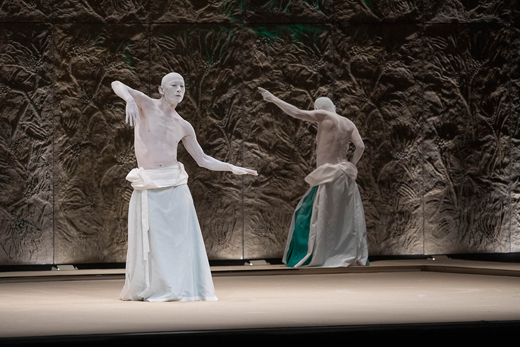 The sequence of sections of Meguri are: (I) The Call from the Distance; (II) Transformation on the Sea Bottom; (III) Two Surfaces; (IV) Premonition – Quietude – Tremblings; (V) Forest of Fossils; (VI) Weavings; and (VIII) Return

And to also acknowledge, UCLA CAP offered pre-show Listening to the Landscape experience that featured excerpts from CAP resident artist Eiko Otake’s film, A Body in Fukushima, other video works by Eiko, and in collaboration with the project Dear Climate, a pop-up meditation room for a meditative listening experience with the natural world.