L.A. Louver is proud to present Edward and Nancy Kienholz’s The Merry-Go-World and Begat by Chance and The Wonder Horse Trigger (1988-92). Having been exhibited 15 times throughout the US, Europe and Asia, this is the first time the work will be shown in Los Angeles since it first debuted at L.A. Louver in 1992. 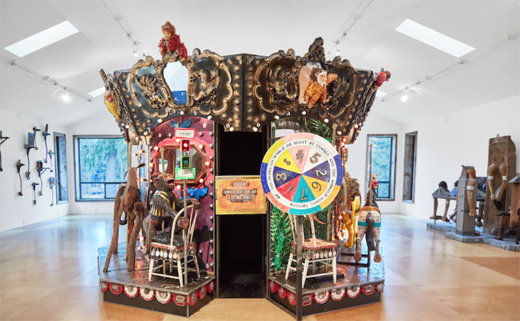 Considered one of the artists’ most ambitious tableaux, the large-scale, multi-media assemblage environment examines what Ed described as “the random accident of birth, the mystery involved, and the importance of all life.” The impetus to create the work came from Nancy, who developed the concept after an incidental encounter with a woman beggar on the streets of El Paso, Texas. Nancy recalled, “She disgusted me. I did not give her any money. The memory of this woman preyed heavily on my mind. I was ashamed of my reaction. Over the next years, this image kept coming back to me, and the thought of the accident of birth and one’s destiny because of it, took shape in my mind.”

With their mission firmly established, the Kienholzes chose to construct a stationary carousel, complete with the customary trappings of a carnival attraction. With its grandiose façade, the thrust of the work lies at its interior core. When encountering The Merry-Go-World, the viewer is asked to spin a wheel of fortune and enter the tableau, only to be immersed in one of eight lives, each born into different cultural and socioeconomic realities. You can be placed in the life of an impoverished Oglala Sioux couple in South Dakota, a chairmaker in Egypt, a street barber in Bombay, a young Maasai woman in Kenya, a Houston child living in abject poverty, a Chinese taxi cab driver in Beijing, a wealthy woman in Paris, or a little girl from a hillside favela in Rio de Janeiro. To distribute the fortunes of the individuals in the tableau, Ed and Nancy “determined that if you divided the world into eighths by monetary considerations, you would end up with one section wealthy, two parts middle class and five sections poor or extremely poor.”

The Merry-Go-World and Begat by Chance and The Wonder Horse Trigger is one of the Kienholzes most deeply personal works, one that they could only execute together, as a full expression of their intimacy and creative partnership. A catalogue, with a preface by Peter Goulds (Founding Director, L.A. Louver) and an introduction by Lisa Jann (Managing Director, L.A. Louver) and color illustrations, will be published on the occasion of the exhibition.