You are invited to join Joseph, fellow artists, friends, and art enthusiasts at the opening of ‘Pace’ at Gloria Delson Contemporary Arts gallery in Downtown LA on Saturday, November 4th, 6pm – 10pm. The event is free and open to the public. Complimentary drinks and tidbits will be served.

Joseph is mostly known for the “L’s” in his paintings. These are distinct arrangements of L-shaped patterns, that tie in with simulacrums of perceptible objects. The structure of the paintings embodies a combination of design art and substance that typically comments on the abandonment of “elegance” in today’s society, among other motifs. One of the interpretations of the meaning behind the L’s, is that they represent the ‘ele’ in elegance. His unique style and enigmatic portrayal earned him fast growing recognition and appreciation.

Joseph was born in Hamburg, Germany and grew up in Israel, he has been residing in LA for the past 10 years and used to be a touring musician and a real estate investor. in 2016 Joseph began painting once again, an occupation he has abandoned since his late childhood, despite his precocious artistic abilities. Joseph’s studio is in West Hollywood and his work commentary, and photography can be viewed on his website at www.tyjoseph.com. 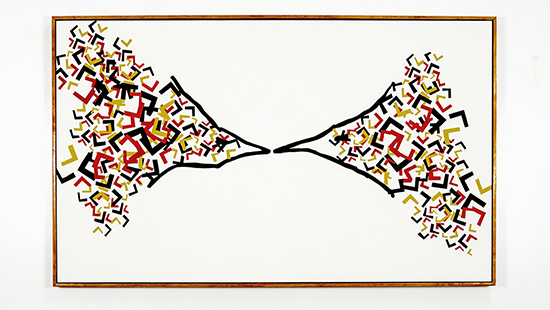 Gloria Delson Contemporary Arts (GDCA) is a full-service contemporary arts gallery located on Spring Street in Downtown Los Angeles, in the heart of Gallery Row. After serving as a private art dealership for more than thirty years, catering to private and corporate clientele, Gloria Delson debuted her gallery space in March 2010, and has been open to the public since then.