Los Angeles-based artist Deirdre Sullivan-Beeman’s solo exhibition “Girls, Girls, Girls” opens at La Luz de Jesus Gallery on Friday, November 3. The show will represent her largest single body of work to date. There will be an artist’s reception at the gallery that evening from 8-11PM (4633 Hollywood Blvd., Los Angeles, CA 90027). 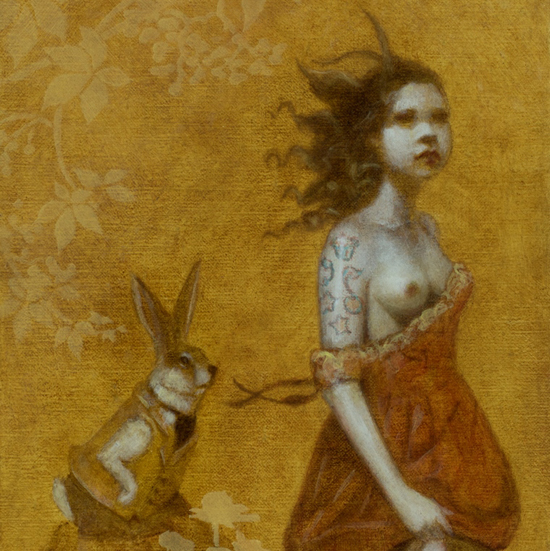 In Sullivan-Beeman’s show statement, she says, “Today’s girl is an emerging phenomenon. What is her secret ingredient? It’s not only about being treated equally, it’s about being strong, present – a ‘wonder woman.’ The powerful femininity arising now is a direct translation of the yin energy that I idolize.”

She adds, “My work comes from someplace subliminal…a magical realm. It’s the unknown where I like to go. The characters that have been inhabiting my dreams are all here. As if I’ve been holding my breath, and this is the first, fullest exhalation.”

“Girls, Girls, Girls” will feature 13 new paintings, all executed in the time-intensive egg tempera medium for which Sullivan-Beeman is known. In a “Creators” piece on her for Vice, Tanja Laden wrote, “Egg tempera was the medium of choice for Old Masters like Michelangelo, but once oil paint replaced it in the early 16th century, the once-omnipresent art technique became quickly antiquated. Now, Deirdre Sullivan-Beeman is resurrecting the use of egg tempera in her dreamlike paintings, while also reminding audiences of the archaic medium’s characteristically mysterious sense of illumination.”

The exhibition will also feature a painted resin sculpture of “Turtle Girl” (painting pictured below), and an original drawing of the same work.

Recently, Sullivan-Beeman had a piece in “In My Head – Visionari Contemporanei,” a group exhibition at Merino Bottega D’arte in Florence, Italy, and at the Life Is Beautiful Music and Art Festival in Las Vegas, NV (for the second consecutive year). She has previously shown at La Luz de Jesus (where her last solo show sold out) and Corey Helford Gallery in Los Angeles,Greg Moon Art in Taos, New Mexico, and Stephen Romano Gallery in New York City.

Find out more about the artist at http://www.sullivanbeeman.com/