Skip to content
The Art of Michael Giancristiano Debuts at LA Artcore & Pasadena Showcase House for the Arts!

Artist Michael Giancristiano’s work is currently on view at LA Artcore. His solo exhibition is titled “Desert Dreams (The Ears of Zion)” and features new work.

“My latest body of work is 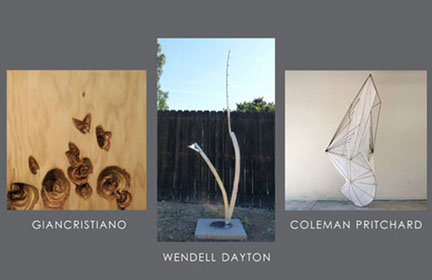 inspired by cave exploration, dreams, the desert, and sound. Layers of plywood, as they twist and turn, resemble the geologic formations of swirling sandstone found at Zion National Park in Utah.”

Some of the caves depicted in his work resemble birds, butterflies and flowers while others resemble ears. Giancristiano explains his work…”The wood used has been twice re-purposed. Three times if you count the initial conversion of the tree into the product known as plywood. It was used to build a stage at an environmentally themed event called. ‘Opportunity Green.’ The stage was later disassembled and the wood was given to me as a gift for future use.”

He went on to say that each block (in its precut and raw form) was sculpted using a large industrial drill that was fitted with hole coring bits and wielded by hand to create spontaneous forms. “The surface wood grains help to tell a story,” added Giancristiano. “They are sanded, stained and buffed repeatedly before sand and acrylic is applied to the sides. Caves are mystical and often dangerous places where secrets and new experiences lie waiting to be discovered. They are places in which to hide. Sometime physically but often, caves are where we bury our pain and deepest feelings from the world. Dreams emerge from dark recesses and spill out into the gleaming light, creating mystery and beauty. The key is to listen for them.”

Additional artists that will be showing are: Wendell Dayton, Coleman Pritchard. Gallery Hours: Thursday – Sunday 12:00 to 5:00 p.m. Wednesdays by appointment.

The art of Giancristiano will also be featured as part of the 51st Annual Pasadena Showcase House of Design. 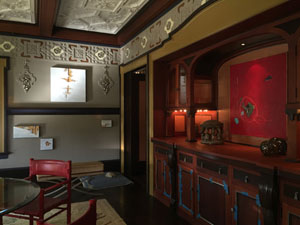 Thanks to a significant commitment on the part of the members of PSHA who volunteer their time, the talent and financial commitment on the part of designers and the many others who donate their time, products and money – The Pasadena Showcase House of Design is now one of the largest, most successful and oldest house and garden tours in the United States. PSHA’s tradition of volunteerism has continued to make the Pasadena Showcase House such a tremendous success.

Since 1948, Pasadena Showcase House for the Arts has awarded over 19 million dollars in gifts and grants to support the Los Angeles Philharmonic, Walt Disney Concert Hall, other non-profit organizations and local symphonic, cultural and educational musically oriented programs for youth

Tickets can be purchaced HERE!

2015-04-26T04:15:22+00:00By Kathy Leonardo|Past Events|Comments Off on The Art of Michael Giancristiano Debuts at LA Artcore & Pasadena Showcase House for the Arts!