Part music festival and part hometown fair, this three-day, family-friendly event includes musical acts on two stages, old school contests and games, a Fun Zone, local artisans, craft vendors, amazing food and the ever popular and widely anticipated Memorial Day parade. One hundred percent of the proceeds of the festival benefit the TCC, which is one of the last remaining community houses privately owned and managed by volunteers in the state of California.

Attendees are encouraged to arrive early, stay hydrated, put on sun block and sit, dance, and relax while enjoying the warm hospitality and beautiful weather of the Santa Monica mountains.

Musical Acts:
LUKAS NELSON & PROMISE OF THE REAL (POTR) is the Monday the 27th headliner. Nelson, who has played main stage years ago, co-produced the music and contributed to the Oscar nominated soundtrack for the film A STAR IS BORN, collaborating with Lady Gaga and Bradley Cooper and appearing in the film as part of Cooper’s band. http://lukasnelson.com

FANTASTIC NEGRITO is the Sunday headliner. This two-time Grammy® award-winning singer-songwriter Xavier Amin Dphrepaulezz, is best known by his stage name FANTASTIC NEGRITO. He brings his unique style of blues, R&B, and roots music to Topanga for the first time. https://fantasticnegrito.com

And finally, ORGŌNE is headlining on Saturday, the 25th, LA-based Orgōne blends funk and California soul for a unique sound that really gets audiences moving 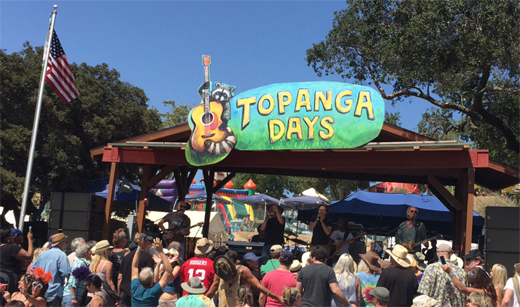 Over the course of three days, two stages will feature more than 28 acts. Artists set to perform on the mainstage include: Pearl, Venice, The Greenhorn Brothers, Pete Pidgeon & Arcoda and The Disparrows on the mainstage and over 15 more on its Corral Stage in the Community House.

TICKETS ON SALE NOW. Tickets range in prices from $15.00 for a single day member ticket to $80.00 for a Three-day non-member pass.

Let’s not forget the Topanga Days Memorial Day Parade takes place on Monday, May 27th at Pine Tree Circle, 120 S. Topanga Canyon Blvd., Topanga, CA. It begins at 8:30am; Find out more about it on http://www.topangadays.com