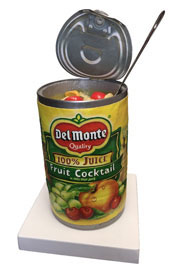 Breaking from the flat surface of traditional painting, Gary Polonsky brings three-dimensional painting to a new level of depth and focus as he revisits his food series. Polonsky began exploring non-traditional mediums and eventually settled on a combination of Balsawood, Styrofoam and wire-mesh to create eye-catching wall-based constructions that leave the viewer awestruck.

Though wall-based, Polonsky’s work have a tangible quality. One is very tempted to touch and feel the work. It is as if the pieces are teasing the viewer. They are clearly not edible, but one has an insatiable desire to pick it up and take a bite! 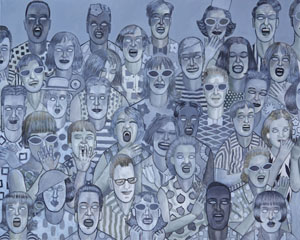 Her favorite movies are the gritty film noir dramas from the 1940s and ’50s, and these audience paintings can be seen as a nod to noir: raw, not tasteful. Crown was influenced by German Expressionist art, and film noir actually grew out of interest in early German Expressionist film. The contorted faces and odd angles intrigue her. When studying at the School of the Museum of Fine Arts in Boston, she took courses in German Expressionist film and literature. Katie loves Paul Klee for his humor and poetic sense, but when painting figuratively she’s more indebted to Max Beckmann and Ludwig Kirchner. Crown uses patterns to energize the scenes. Her “audiences” ride the border between reality and cartoon.

JOAN RANSOHOFF – Postcards from the Field

This exhibition of work features original paintings done on location and inspired by the artist’s travels around the country, particularly California, Idaho, Utah, Washington, Connecticut, New York and the Hudson River Valley. Not all paintings are done on location to completion. Some are studies on site and finished in the studio. Working from nature directly allows Ransohoff to see color and shadow differently and in the studio, she uses photographs to sharpen her memory. On location, she makes quick sketches of the landscape to get the composition. Then she focuses on color. 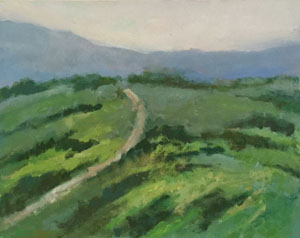 TOM WHEELER – Into the Night

Tom Wheeler likes to light things up, literally, and with flashlights. That is probably a good thing, or maybe a necessity, because he is a landscape photographer who works in complete darkness. Outdoor photographers often speak passionately of light, created uniquely at a moment in time by nature, by something close to divine circumstance. Wheeler approaches the use of light, and even photographic elements themselves, quite differently in his landscape imagery.

Landscape photography is always at the foundation of his images. Most of his photography is, in fact, about the landscape first, and then an enhancement, or artistic license with light tools. All imagery is hand-made at the time of exposure and there are no additions by Photoshop or any other means added in post-production processing. Some of his themes include whimsy. Beach balls in the desert, a life-sized plastic horse, or a cement deer are all fair ‘game.’ But on closer look, there is also a serious reverence to nature as well. In all his artwork there is interpretation, but even the subjects in his whimsical work are most often framed within spectacular elements of natural surroundings. The rugged and often remote ‘wilds’ of the western U.S. are subject locations of preference, while unspoiled deserts, mountains, and forests of this region offer a myriad of photo opportunities. 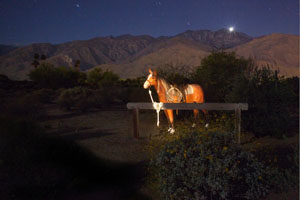 Save the date, Saturday, June 6, 3 pm for an Artist Talk!