TAG Gallery hosts three exhibitions. TAG artist Fielden Harper curates a show titled “Transfigurations” featuring Gus Harper’s work (her son). Gus is a talented artist who has traveled all over the world creating murals – Read my interview with Gus Harper about his recent trip to Indonesia on our sister site – EatTravelGo.com (in the Stories Section, under the Art drop-down). 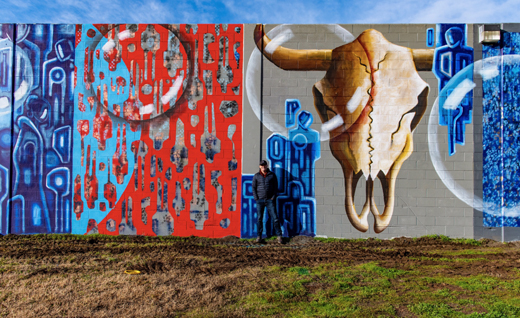 Gus recently created a 600-foot long mural titled “New Earth Mural” for a new vocational school (to help incarcerated juveniles re-enter society). It will replace Camp David Gonzalez in Malibu. “Transfigurations” will feature 10 -12 images that are inspired by the mural itself. One of Fielden’s paintings will also be in the show. Her painting features another mural that Gus created in West LA. “I have long been fascinated by the murals of LA, said Fielden. “I studied with Kent Twitchell at Otis and an eight-year old Gus helped me as I created an image on the underpass of the Hollywood Freeway at Vermont.” Gus responded, “I guess It must’ve had an effect on me because here I am years later doing the same type of thing. Now I’ve been an artist full-time for 19 years. My mom and I have shown together and this is the first time she has a curated any of my work.” 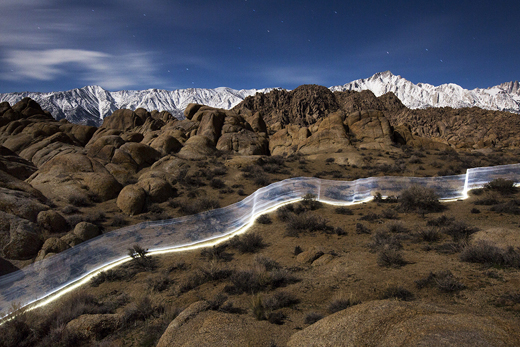 Wheeler does not consider himself a landscape photographer working as a 3rd party observer, but rather as a photographer working “within” nature as a part of the scene, deliberately intruding into it. The work utilizes long-exposure experimentation to present human interaction with the natural world, tweaking both time and space. In this regard Wheeler’s images intend to showcase mankind’s fleeting but relevant existence within robust natural elements such as boulders, cliffs, deserts, and mountains. Wheeler does not intend to make a direct case for or against mankind’s intrusion or nature’s power over us, but rather a co-existence that acknowledges the intrinsic value in seeing the potential that both humanity and nature share in having the ability to create beauty or wreak havoc on the other. Humans manipulate nature to our own desire, and how we choose to do that reveals our connection to our natural environment.

The exhibition showcases artworks based on existing stamps from his original collection as well as more recent work inspired and birthed from Polonsky’s personal library of photographs. Polonsky began his stamp collection after a visit to China in 1979 with his parents. “Nixon was President, and a gallon of gas was 86 cents. We traveled to Guangzhou (Canton) for the International Trade Fair. While there, wandering through the Tung Fa Hotel, I came upon two large displays of Chinese stamps. Each small image, and there were many, depicted the vast panorama of life in China. I bought the complete set and brought them home.”