Val Kilmer is set to show his paintings and sculptures in a solo exhibition titled “Icon go on, I’ll go on,” for one weekend only at the Gabba Gallery. Kilmer, best known as an actor, uses painting to investigate the nature of Icons and to explore issues of celebrity, identity, reproduction, and American mythic archetypes.

In Val Kilmer’s recent paintings his representational choices are not of himself as a subject, but of himself as a character, rendered as an instantly recognizable Icon through the use of stencils. These are not self-portraits (just as the roles he’s drawing from are not self-portraits). They are self-referential only as a stepping-off point to explore these Archetypes. His choice of characters (certainly as a painter and, perhaps as an actor) are Mythic and particularly American ones – The Superhero (Batman), The Cowboy (Doc Holliday), The Rockstar (Jim Morrison), The Writer (Mark Twain – “The First American”), and the Soldier (Iceman from “Top Gun”). The film references in these choices are actually their least important element. 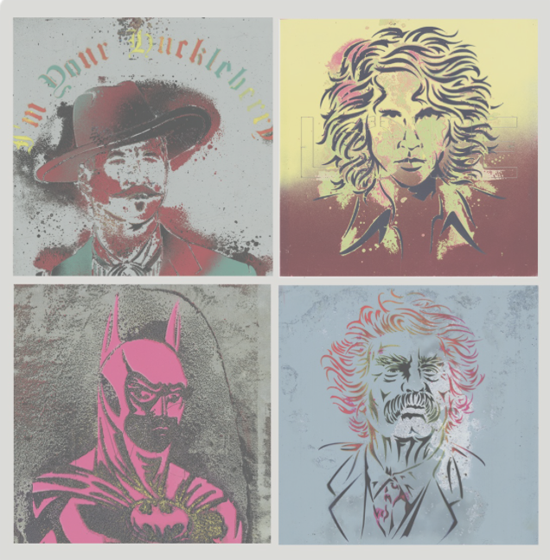 So, despite the stencil base, they’re not simple. Paint layers and blotches sometimes obscures the lines indicating that these Mythic Characters are literally colored by the individual human hand that’s bringing them to life. He says: “I’ve developed strong and nuanced themes in my art from acting and performance that relate to iconic images or ideas – so there’s a thread of the icon and the Iconographic throughout the exhibition”.

One room of the gallery will be dedicated to a showing of very recent abstract work. Also painted on metal, these works are iconic as well, but more in the spirit of Russian Icons, replacing wood with metal. The Portrait orientation of the pieces and the depth of the layers encourage the viewer to fall into the frame. The infinite shoreline edges reference the fractal notion of zooming/falling infinitely into the image. Kilmer himself has noted the “Black-Hole” nature of these pieces. They are windows into another world. Also on display (for the first time publicly) are large (82″ x 48″) works, each comprised of 16 individually painted laser-cut metal panels of the word GOD. Kilmer invokes the word GOD as the ultimate Icon. Naming God and parsing that name out in multiples that invite the viewer to abstract and examine the word, and one’s own relationship to the word itself. Individual panels will also be on display. Recontextualizing iconic items is at the heart of the sculpture pieces, A neon Applause Sign (Used on-stage in Val’s play Citizen Twain) shifts from APPLAUSE to APOLOGIZE. Tumbleweeds, a symbol of the Old West are transposed into sculpture by recasting multiples of them in Gold and rubber. These familiar words and images and their attendant references and create a conversational space around them that redefines the Icon and the viewer’s relation to it.

RSVP to valart494@gmail.com  For additional info on the artist, visit https://valkilmer.gallery