Chimento Contemporary is pleased to announce a group exhibition curated by Patricia Hamilton and featuring artists from the Schweitzer/David Gallery in Bushwick, New York.

From 1977 – 1984, Patricia ran a contemporary art gallery in New York called the Hamilton Gallery of Contemporary Art. She exhibited many women artists including Louise Bourgeois, Grace Hartigan, Deborah Remington, Joan Snyder and Donna Nelson as well as many others. 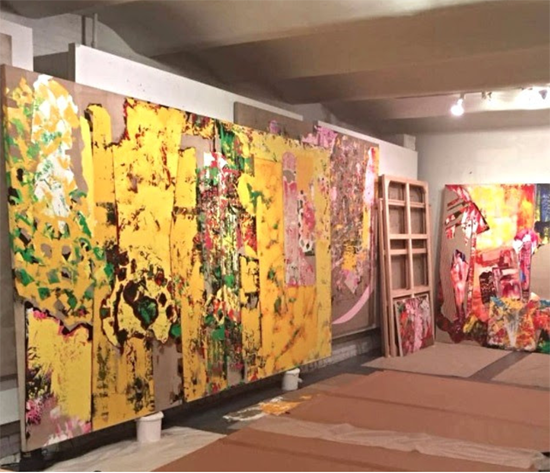 This is Patricia’s first curatorial project since 2008, when she curated an exhibition of female artists who were from India. One of the younger artists she exhibited was Michael David. She and Michael stayed in touch throughout the years via social media. In 2008 the moment when the stock market crashed many artists either sold or were kicked out of their rentals in Soho. The artists including Michael went in search of a new area to call home for their work. Michael was one of the first artists who moved into an area in Brooklyn called Bushwick and about four years ago he noticed that there were approximately 60,000 artists living and working there, a real community, much like Soho was in the 1970’s through 1980’s. Michael opened a gallery called Life on Mars and exhibited among others the works of Farrell Brickhouse and Brenda Goodman (that gallery closed a year ago). These were two artists whose work Patricia knew very well from her gallery days in New York. This fall he teamed up with Keith Schweitzer and formed the Schweitzer/David Art Gallery. The gallery exhibits many artists who live and work in Bushwick including David John Gadd and Dana James, both former students of Farrell Brickhouse. Straight OUTTA Brooklyn pays tribute to this new artists community in New York and some of the best painters Patricia knows there.