Cirque du Soleil has inspired a movement. Leading the trend of high quality entertainment since it burst onto the scene in 1984, the Montreal troupe has set a high bar. Dance companies across the country and popular network tv variety shows now strive to match the extravagant display of talents. 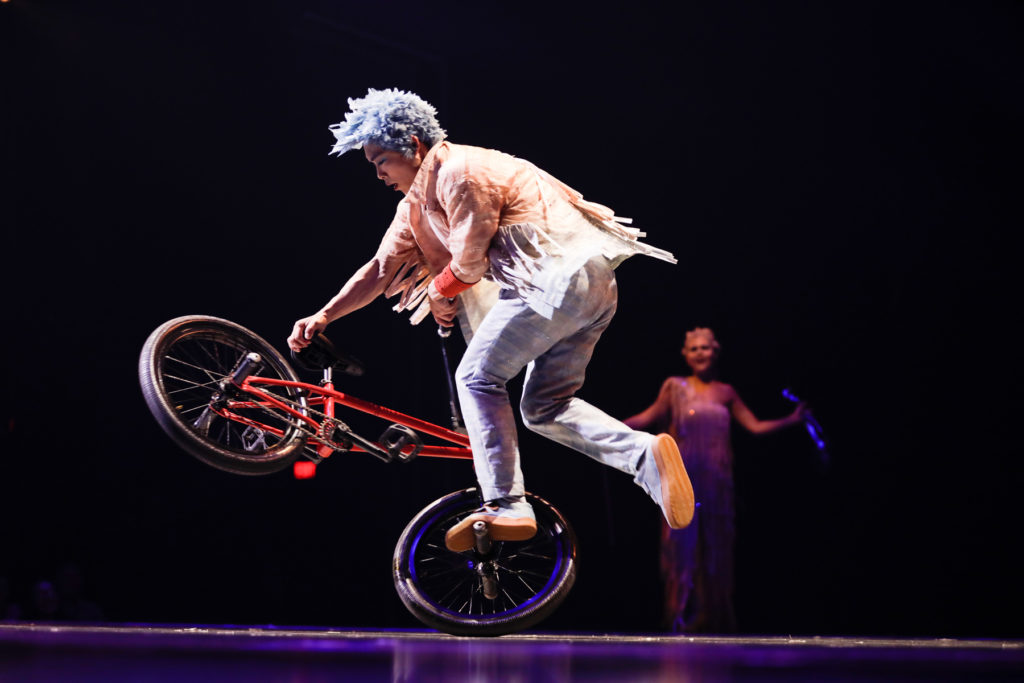 I recently attended the opening night of “Volta,” Cirque du Soleil’s 41st original show, and its first sports inspired Big Top production. I’ve always been a fan of its incredibly intricate acrobatic performances, so when I heard this would be the first show to include BMX and street sports, I was unsure what to expect.

Introducing street sports into its already proven formula of presenting outstanding extravagant shows featuring acrobatics, gymnastics and contortionists, was an exceptional choice.  I must admit, at the top of the show, I did miss the Cirque du Soleil signature mime/clown which kicked off the previous shows I had attended. I have come to look forward to it, after attending ten or so productions. I was baffled by the opening act as he “talked” his way through the first number. However, I was gleefully surprised with the Washing Machine bit. The mime/clown had me howling, and the eclectic performance proceeded with its dynamic range of talent.

“Volta” celebrates one’s own individualism. As is with most Cirque du Soleil shows, there is a plot – Mr  WAZ, (Joey Arrigo), who is in search of fame, deals with rejection  but fitnally embraces his uniqueness. However one does not need to follow the story as each segment in the show has a beginning and an end unto itself. 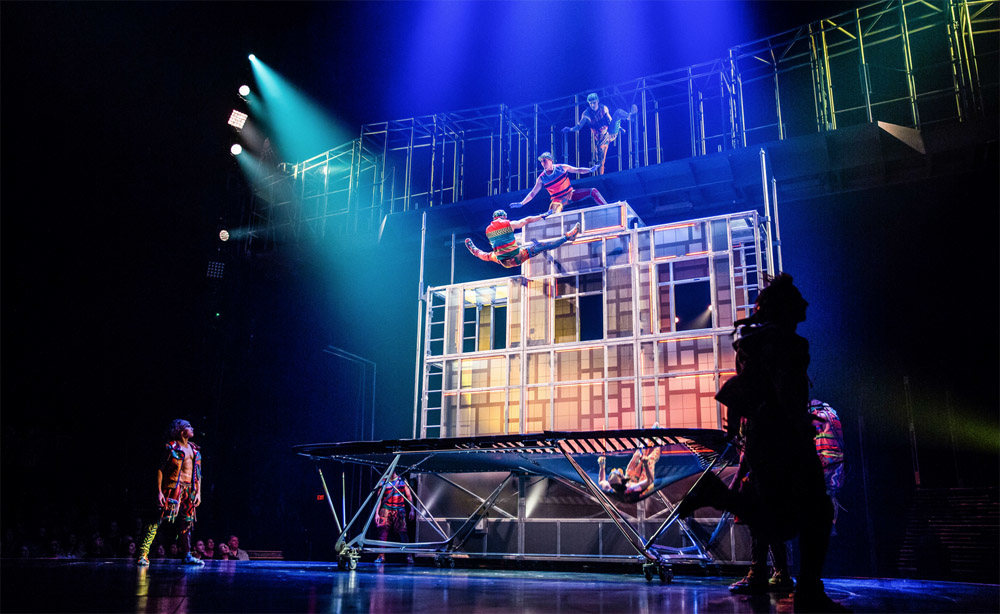 A stand out performance took place in the first act was the Tramowall. A structure appeared with performers jumping off onto a trampoline and then back up to what resembled a building. The acrobats often walked up the side of the structure than bounced back to the launching pad. As this was happening…the stage was moving the set counter clockwise to expose another trampoline. This clever choice by set design (Bruce Rogers) created a clear view for the audience on each side of the ‘almost’ theater in the round venue. The performers merrily bounced back and forth up to the structure and out the other side. It was meticulously choreographed (Julie Perron) and featured elements of parkour, snowboarding and other extreme sports.

One of my favorite segments was a look back at the main character’s youth. Combining a ballet dancer with a BMX biker was unexpectedly brilliant. A mother starts to video tape her child on his bike, and soon a full out beautiful dance/BMX bike sequence follows. 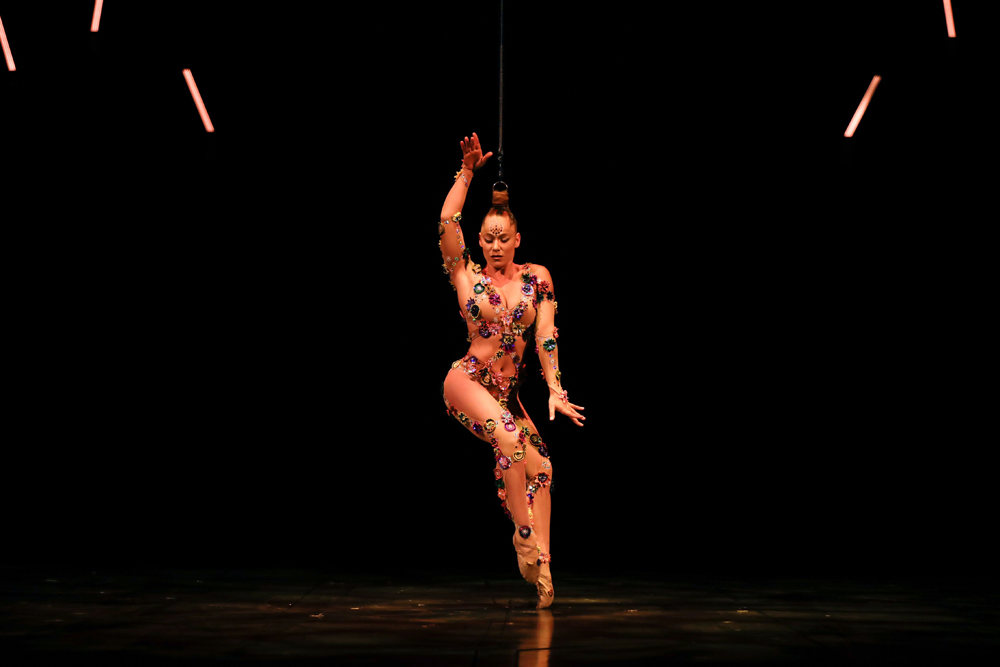 Perhaps the most subtle, but wondrous exit at the end of an act goes to Mirage featuring Vanessa Ferreira Calado. After an exceptional aerial routine, while she was literally dangling from a rope attached to what appeared to be her hair, the performer was lifted swiftly and dramatically into the air and disappeared into the ceiling. Now that’s an exit.

The finale took our breath away as the BMX bikers swooped up bike ramps and spinned, and flipped in the air in Momentum. These death-defying moves were implemented with ease by these talented daredevils, who appeared to be thoroughly enjoying themselves.

The above mentioned acts were just some of my favorites of the night. But there is so much more for one to take in. 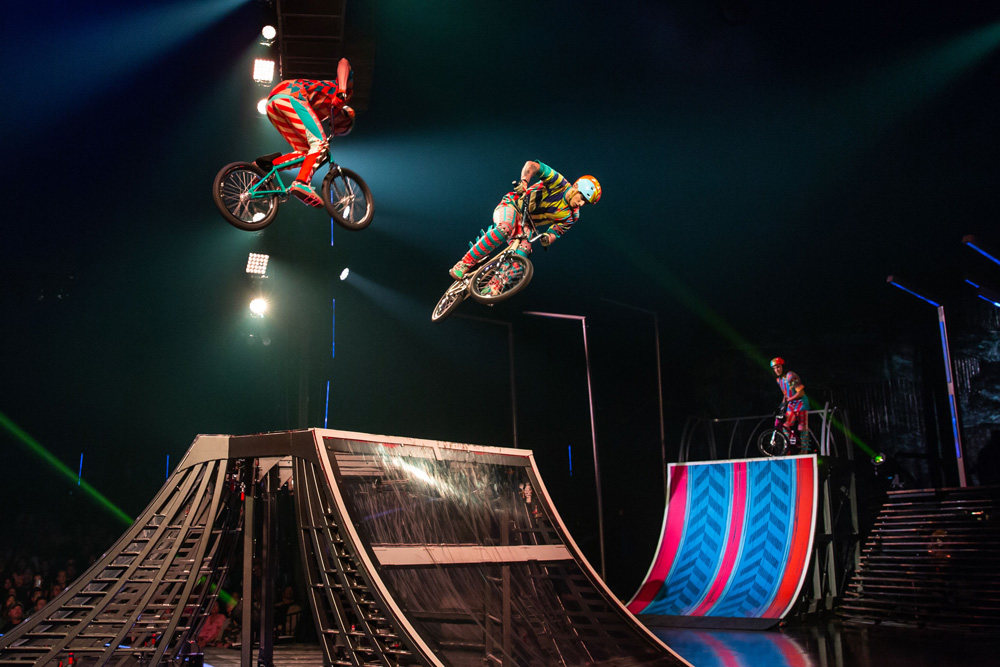 With incredible entertainment at our fingertips we can now sit in our living room and watch incredible television shows such as the America’s Got Talent franchise and others – but I can tell you firsthand – there is nothing like seeing it live. Enjoy a performance by the original troupe who inspired it all…Cirque Du Soleil.

Order your tickets now to see “Volta,” Cirque du Soleil latest offering running through March 8, 2020. It celebrates the spirit of adventure and all of our own individual talents.

You can find the Big Top in the Dodger Stadium parking lot (1000 Vin Scully Ave, Los Angeles, CA 90012). Be aware Gate A (off Sunset) is the ONLY way to enter…when you arrive, you may have to ignore your phone/car navigator and head to Sunset. Parking at Dodger Stadium is $25;  You will then have a chance to see this fabulous production at the OC Fair and Event Center in Costa Mesa through April 19, 2020; https://www.cirquedusoleil.com/