Skip to content
Save the Date…March 14th, and 15th, Australia’s Circa Set to Perform at Broad Stage!

A Different Kind of Circus Comes to Town…Australia’s Circa pushes boundaries between circus and dance. Hot off a world tour, the ensemble comes to The Broad Stage in Santa Monica 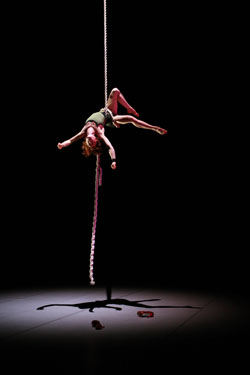 Brisbane, Australia, comes Circa…a bold vision of contemporary circus performance that has quickly risen to become one of the most acclaimed circus ensemble in the world. Circa performs on Santa Monica’s The Broad Stage on Friday, March 14th, and Saturday, March 15th, at 7:30 pm

Circa returns to the U.S. this year for its fourth nationwide tour after receiving international acclaim. Under the artistic direction of Yaron Lifschitz, the troupe combines astonishing physical mastery with poetic resonance and pushes the boundaries between circus theatrics and dance.

“Hundreds of cities around the world have risen to their feet in celebration of Circa and we are delighted to welcome them to Santa Monica,” says Dale Franzen, Director of The Broad Stage.
“The blending of bodies, light, sound, and skills meld into a seamless whole that redefines the nature of circus,” says Franzen.

Circa presents a breathless cocktail of acrobatics, dance and cabaret paired with an immersive use of sound, light and projection. The company’s multi-talented performers reveal the outstanding strength and beautiful architecture of the human body in a risk-taking performance that London’s Guardian calls “breathtaking, beautiful, and sexy.”

As artistic director and CEO of Circa, Yaron Lifschitz has helped redefine the idea of a circus into something artistic, emotional, and challenging. The company pays homage to the classic circus while sharing its new vision of theatrical, multimedia, boundary-pushing productions.
At its Broad Stage debut, Circa will perform its self-titled show which has been described as its most accessible and engaging work. The large-scale show was originally remixed from three of the company’s most acclaimed works, but it continually evolves. 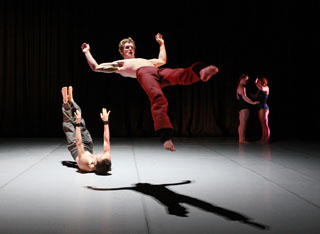 risbane-based Circa is a company of international significance due to its impressive reputation for innovation, international touring, and repertoire. The company started out as the Rock ‘n’ Roll Circus in 1987, but Yaron Lifschitz changed the name when he took over in 2004 — he wanted something more edgy, more unmistakably circus-like. The touring troupe is made up of seven core members, each of them highly trained in the circus arts. Though young, most of the members have been performing for years, with resumes boasting stints at the National Institute of Circus Arts, the Flying Fruit Fly Circus, and other companies around the world. Circa runs a training center with an impressive workshop program at its professional studio in Brisbane and partners with schools and affiliates throughout Australia.