Fifty years ago the Watts-born artist Timothy Washington, then 24 years old, made L.A. art history as the youngest of the trio comprising “Three Graphic Artists,” the first survey devoted to black artists at the Los Angeles County Museum of Art. His anti-war aluminum engravings depicting oval-eyed black figures were featured alongside the body prints of his old friend David Hammons and the charcoal drawings and prints of powerful African American figures by the late artist-educator Charles White. 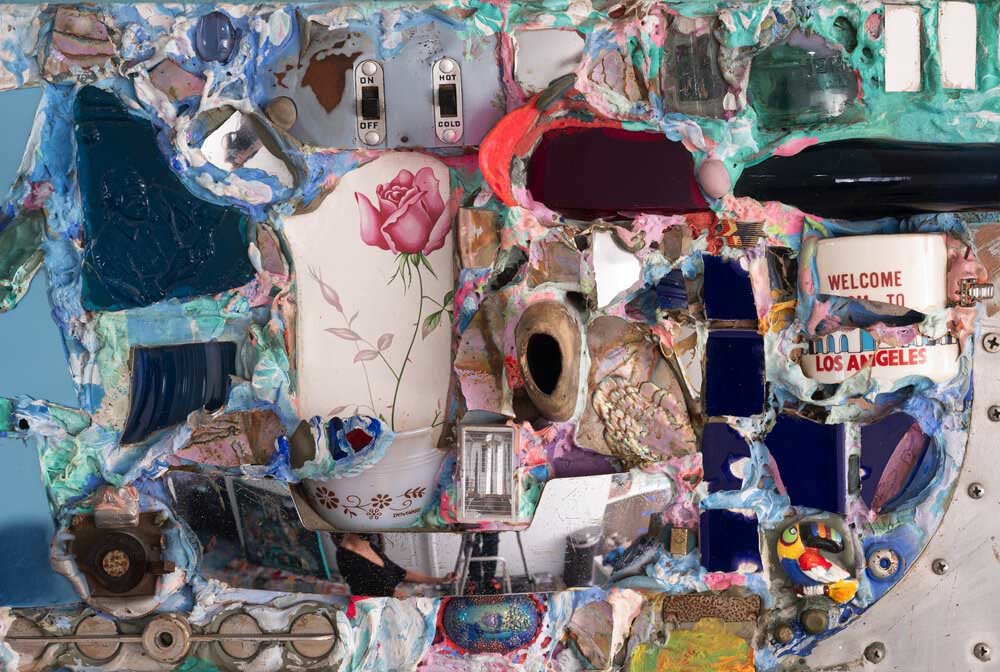 In the ensuing half century Washington has created a soulful and spiritual oeuvre influenced as much by an early childhood spent in the shadow of—and playing on—Simon Rodia’s Watts Towers as his lifelong fascination with the aesthetic and emotional power of found objects. His relentless quests for materials have taken him on hours long walks along the train tracks behind his childhood home and scavenging tours around the base of the great pyramids in Egypt (on a trip with Hammons, Ian White, and the late John Outterbridge, whom he often traded found materials with).

The show derives its title from a 1985 wall work that Washington calls “a contemporary approach to a stained glass window” and one that is affixed with all kinds of newspaper clippings, tinted plexiglas, and a clear plastic box in the middle of the work filled with hypodermic needles and dice “portraying the gamble it is living here.”

This titular panel also serves as a midway point of the show’s chronology, which dates back to the late-Sixties with graphite life drawings from Washington’s Chouinard days when he scavenged nails on a school outing to Terminal Island where he found “mountains of scrap metal” that would become the binding element for his seminal 1968 figurative sculpture Love They Neighbor. At the other end of the spectrum is the 2018 sculpture Rest In Peace, a towering blue goddess that is half painted, half mosaiced with objects replicating the illusion of a total body tattoo.