From now until the end of the year, Ocean Blue is offering 50% to 75% all store merchandise.

When I first came to Venice Beach, before I ever moved to LA, I remember a store on the boardwalk called Ocean Blue. It had such cool stuff, mermaids with wings, flying high above my head, colorful painted wood framed mirrors in the shape of a sun, the smell of incense and candles burning as well as beautiful sterling silver jewelry. Back in the 90’s I would buy gifts for my NYC friends there, at Ocean Blue, to bring back to the East Coast.

I just found out that it soon will be closing….after 20 years. I recently met the owner of Ocean Blue, Larry Gutin who told me a bit about his story and the store and how long it has been in his family. “My Dad started a T-Shirt business on the beach back in 1978. Back in those days, Venice Beach had stalls that you could rent and sell your wares.” Since his parents were divorced, Larry lived full time with his mother in NY but would spend the summers in LA with his Dad. In 1982 Larry’s older brother Jeff, took it over. Then in 1983 Larry moved to LA and worked while he went to college. 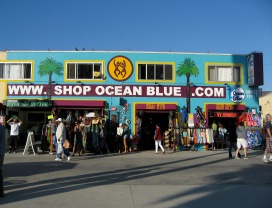 990, Larry Gutin traveled to Indonesia. He fell in love with Bali and the beautiful arts and crafts made there. Larry shipped some merchandise back to his brother Jeff, to see if it would sell. It was indeed a huge hit in Venice and Larry continued to bring beautiful items from Bali to sell at Ocean Blue. Silver Jewelry was added to the product line at Ocean Blue. His brother Jeff decided to retire from the business, leaving Larry as the chief in command.

The economy definitely affected sales at Ocean Blue in the last four or five years, but Gutin managed to stick it out with the help of the Venice community’s support. When asked if he is sad about closing, he shrugs and says, “It’s time for a change.” Larry is considering starting a new business, but in the meantime has decided to go out with a bang!