The first Saturday of April (April Fool’s day) offers a huge amount of art parties, I have tried to list even more that usual if they are located in neighborhoods where several are taking place….good luck, we also have two Top Ten art parties on the SAME day.

Don’t forget to check this list of additional art and entertainment events for April 2017. Remember, to check our update on the 15th of each month, as we add more events for the latter half of the month. – Hope to see you at the art parties! For you theater lovers, one of our staff writers reviewed the play Elevator – which is currently running through April 30, 2017. See the bottom of this post and the Upcoming Event Feature for more info. Go to our Review Page to read our review. ======================================= 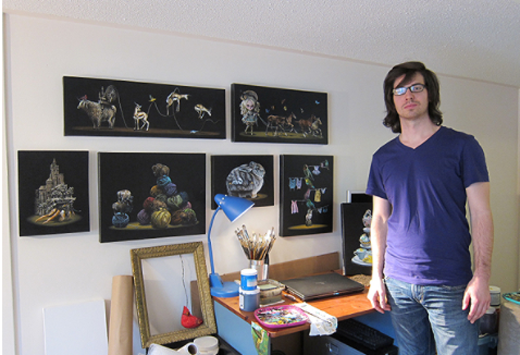 April 1, 2017:
dnj Gallery is pleased to announce its upcoming exhibition of “Prior Pleasure” by Ellen Cantor. In her photographs, she examines the joy and delight of reading, emphasizing the physical book. On view: My 13, 2017; Reeption: 6-8pm; dnj Gallery, Bergamot Station, J1, 2525 Michigan Ave., SM, http://www.dnjgallery.net

April 1, 2017:
In the Miracle Mile area…Jill Joy Gallery is pleased to announce Illumination, recent paintings by Jill Joy. In Illumination, Jillcontinues her exploration into the interplay of the unseen worlds of spiritual and emotional energy as an individual soul evolves towards a higher state of consciousness. This exhibition includes poetry by Jill paired with the paintings. On view thru May13; 6-9pm; Jill Joy Gallery, 456 S La Brea Ave., LA, 90036; http://www.jilljoy.com/

April 8, 2017:
bG Gallery presents “Blessing the Animals,” an exhibition by artist John Kilduff curated by Daniel Rolnik. Email an image of your pet to info@bgartdealings.com if you would like it blessed with portrait. Art Party: 6:30-10:30pm; bG Gallery, G-8 2525 Michigan Ave. Suite B1, Santa Monica, 90404; http://www.santamonica.bgartdealings.com

April 15: 2017:
Shulamit Nazarian offers an opening reception for “The Powder Room,” the gallery’s second solo exhibition with Los Angeles-based artist Genevieve Gaignard. Navigating the intersections of race, gender, age, and religion, “The Powder Room” builds upon Gaignard’s practice of character-driven self-portraiture in photography as she introduces a new cast of women, each played by her. On view: May 20, 2017; Reception 6-9pm; Shulamit Nazarian, 616 N. La Brea, Los Angeles, CA 90036; http://www.shulamitnazarian.com/

Dancing the eternal dance of lies and truths, hiding behind walls of our own making, battling the ever-present prejudice that threatens to shut down our sensuality and our search for intimacy, how do we find our place, our position, our passion, in a city as vast as Los Angeles? IN SEARCH OF INTIMACY will play for two performances only, Thursday April 20 at 8pm and 9:30pm. Santa Monica Playhouse,1211 4th Street, Santa Monica, CA 90401; http://www.santamonicaplayhouse.com/=======================================
April 22, 2017:
Head to Bergamot Station today for its annual Spring Fling (one of our Top Ten Picks. The events runs from 10am – 4pm. Then later, several galleries will be hosting opening receptions.

April 22, 2017: This exhibition will also be open during Spring Fling. The opening takes place at the end of the event.
Leslie Sacks Gallery offers a reception for an exhibition of two new bodies of work by accomplished Los Angeles artist Alex Weinstein. Known for his immersive and entrancing paintings, Weinstein combines several past experiments with new explorations in methodology and themes resulting in a series of exciting new works. The Burst abstractions explore mark making and revisit a near-death experience the artist had while surfing. The Double Negative nocturnes combine previous compositional aspects of the diptych, but utilize a distinctly new color palette, stretching the horizon into infinite dusk. On view: June 10; 5-7pm; Bergamot Station, 2525 Michigan Avenue, B-6, Santa Monica, 90404; http://www.lesliesacks.com

Image: Post Modern Pool with Diving Board, 2016, Acrylic on canvas, 61″ x 85″
Melissa Chandon is an incredibel artist. See my review on the Huffington Post about a past exhibition at Skidmore Contemporary Art. Chandon memorializes classic American imagery with a vibrant palette and an exquisite sense of composition. Her paintings of water, sky and the American landscape call to mind Hockney’s pools and Diebenkorn’s strong lines and shapes. Simple geometric forms cast shadows and conjure mystery; portraits of iconic cars pull on an emotional register of days gone by; mid-century architecture is memorialized with lush color and rich surface treatment. Hers is a roadside vernacular of images that are fading from public view.

Isabel Emrich works in an Expressionistic style that straddles both abstraction and figuration. Her brushwork is both strong and fluid—qualities that echo the nature of water, itself. With zeal, Emrich captures the ‘special effects’ water presents to the eye: chaotic refractions in multi-planar space, sparkling light effects, distorted shadows, rippled reflections, etc.—much of it in thick impasto paint, contrasted by passages of smooth vitality. On view: May 13, 2017; Opening reception 5-7pm; Skidmore Contemporary Art, Bergamot Station 2525, Michigan Avenue, B-4 Santa Monica, 90404; 310-828-5070;  http://www.skidmorecontemporaryart.com/