Skip to content
Theater Review: Elevator at the Coast Playhouse!

What happens when seven strangers get stuck in an elevator together?

Elevator, written and directed by award-winning filmmaker and playwright Michael Leoni returned to Los Angeles for a special limited engagement at the Coast Playhouse in West Hollywood. The play originally premiered at the Hudson theaters during the first annual Hollywood Fringe Festival. After a wildly successful run, the smash hit expanded to the Hudson Mainstage Theatre and then the Macha Theater, receiving 11 nominations including “Best New Work” from Broadway World as well as “Critic’s Choice” and “Best Bet” from the Los Angeles Times. 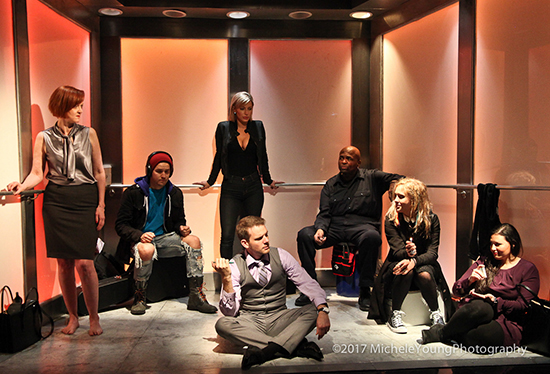 Elevator is the story of seven strangers who are almost cliché archetypes: a CEO woman, a businessman, an office temp, a hot girl, a musician, a maintenance man and a goth girl find themselves stuck in an elevator together. It’s a small, cramped and intimate space that they all must share and endure, like it or not. All their preconceived notions and judgments are challenged as the play unfolds and we learn the truth about each character. As audience members, we are also challenged to understand and learn about each of them without judgment. Elevator is at times hilarious, moving, tragic and surprisingly poignant. It is a story of transformation, acceptance, hope, connection and growth. The stellar cast features Devon Werkheiser (Nickelodeon’s “Ned’s Declassified School Survival Guide”), William Stanford Davis (Showtime’s “Ray Donovan”), Deborah Vancelette (FX’s “Terriers”), David Abed (Blue Man Group), Karsen Rigby, Erica Katzin, Kristina St. Peter and Tyler Tanner. 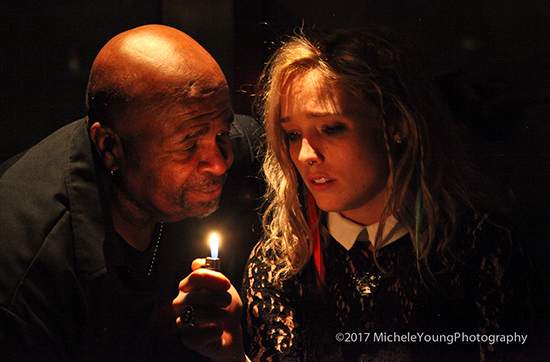 With a sparse set consisting only of an elevator interior, I found it extraordinary, entertaining and touching. Musical sequences, dramatic lighting and sound kept me completely engaged. Kudos to scenic and lighting designer David Goldstein and original music and sound designer Mario Marchetti. Elevator has been extended through June – don’t miss it! For more info about the play, Click Here!  http://www.coastplayhouse.org/