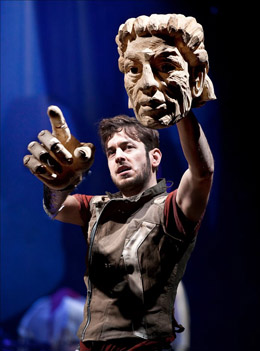 istol Old Vic’s artistic director, Tom Morris and Cape Town’s Handspring Puppet Company come together for the first time since the internationally acclaimed “War Horse.” This mystical, magical interpretation of Shakespeare’s play within a play is a win.

Upon entering the architecturally modern space you are immediately enamored with the 499 seat theatre that has an intimate feel while somehow still seeming majestic. Actors are mingling with the audience in character before the play begins, which is both exciting and intimidating. The set is dark and mysterious. A wood and metal shop. Draped white cloth and a space void of color. The lights dim and the actors bid adieu to the audience and seamlessly take us on a journey of lover’s passion, excitement, pain and silliness all sprinkled with a bit fairy dust, of course.

Oh the puppets! All twelve of the brilliantly talented actors morph from flesh and blood characters into breathing life into the puppets they man, allowing the imagination of the audience to soar. For example,” puck” is created by constructing and deconstructing a puppet using things you would find in your tool shed…a watering can, wicker basket, hand saw and a hoe. The three actors (Lucy Tuck, Saikat Ahamed, Fionn Gill) simultaneously voice the puppet in such a way that you can’t help but believe. The actors move beautifully while delivering Shakespeare’s Iambic pentameter and changing back and forth from parts of the scenery to their character. In one such scene they hold planks of wood to become the trees in the forrest. It must be noted that all of the actors rarely leave the stage, adding to the intensity of the performance. 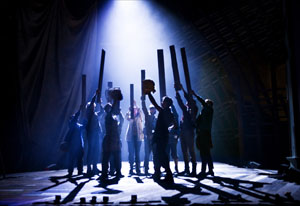 ltos Yerolemou’s “Bottom” literally makes an ass out of himself. Lying on a trolly with his head for the donkey’s tail, his bare bottom as the head and ears placed on his feet as he wheels about the space. Miltos is a standout with his impeccable comedic timing and ease. He kept the audience in stitches. The ensemble doesn’t miss a beat and captivates during the entire almost three hour performance. The music and songs throughout create the perfect mood to add to the action on stage. The evening ended with a standing ovation and an audience that will surely be talking about this artistic endeavor that did not disappoint.