Skip to content
“The Underground: From the Streets to the Stage” at the Nate Holden Performing Arts Center

“The Underground: From the Streets to the Stage” fuses the explosive improvisational energy of street dance with structured modern dance choreography. The beautifully designed Nate Holden Performing Arts Center, which seats 399 people with 102 seats on the balcony level and 297 seats on the orchestra level, provided a comfortable and intimate setting to introduce this ground-breaking dance form to a theater audience. 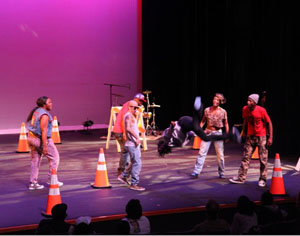 The 53-minute performance, which blends eight live dance pieces featuring 8 dancers with six short video segments, was created, conceived, choreographed and directed by Marquisa “Miss Prissy” Gardner. Known as “Queen of Krump”, she starred in the film Rize, which chronicles the lives of some of South Central Los Angeles’s top krump dancers.

The videos, woven throughout the performance, provided an easily accessible sense of the history and momentum of street performing and include an interview with Lil’ C, who added choreography to the show. It was also clearly apparent in the well rehearsed and professionally disciplined individual and ensemble performances that Miss Prissy brought forth her lifelong classical ballet, jazz, tap training along with her recent experiences having toured with Snoop Dogg, the Game, and Madonna.

Most striking to me was the collaborative, supportive, syncopated, and at times nurturing interactions and relationships among the dancers that was in contrast to the typically intense competitive “dancer versus dancer” nature of what shows up on the street.

It may be that this transformational energy is due to Missy Prissy’s acknowledged being a “mother to the performers” and in fact literally so, as her solo, “Pink Matter”, opened with her young daughter reaching up to hold onto a ballet barre, being carried off stage, and Miss Prissy entering to act-out a poignant inner conflict between classical dance gestures and krump moves.

Highlights of the show included “We 3 Kings” performed by Outrage, Ruin, Worm, “Me Against the Music” with Boogie Frantick doing a solo “popper” routine playing off the variant music genres coming from a boombox, “Drummer vs. Krumper” featuring Brent Pittman on drums, ensemble pieces “Pyramids”, “Adrenaline” and “Guerilla Beatdown” finale which brought the audience to its feet.

The Underground was produced by Jessica Koslow, who recently received her MA in Specialized Journalism (The Arts) at USC Annenberg School for Communication & Journalism.

The goal is to take the show on the road and there are plans to do performances in Los Angeles in 2013 at Mount St. Mary’s College in February, Nate Holden Arts Center in April, and USC in September. For more information, visit undergroundstreetdance.com