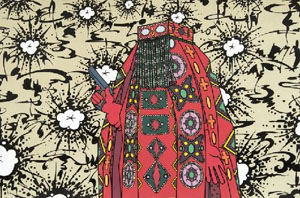 resh on the heels of his critically acclaimed retrospective, Lookin’ Back in Front of Me, at the California African American Museum, Mark Steven Greenfield offers five large figurative ink and acrylic pieces on Duralar and four abstract works for his fourth solo exhibition at Offramp Gallery.

The works are from Greenfield’s Egungun series (pronounced e-goongoon) and deal with duality in the form of blessings and curses. 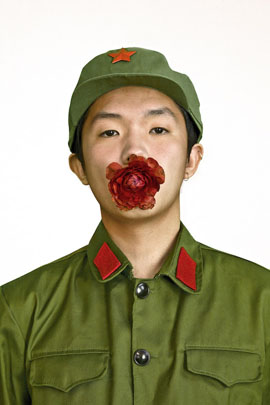 LA Artcore presents an exhibit of three artists.  Mei Xian Qiu, Mike Saijo, and Patrick Quinn offer different approaches to what it means to be an artist, and what the art they make is for.

Mei Xian Qiu (see image)  has created a photo series called “Let a Thousand Flowers Bloom”, referencing the famous Mao reform program, in which she imagines a Chinese Communist takeover of the United States. Using this scenario, she explores the misconceptions and bad translations the West uses to view China, the imagery of romance routinely found in propaganda, but with tongue in cheek references to the immorality such propaganda is frequently criticizing, such as homosexuality, religion, and Hollywood decadence.

Mike Saijo found a way to make art that interfaces with his intellectual interests and an expression on the role of an artist in our society.  Drawing from an intense interest in linguistics, theory, and literature, pages that nourished his mind become the actual surface onto which he applies his images; as an example, arranged selections from Kahlil Gibran’s The Prophet become a substrate for the image of a tree.

Patrick Quinn is an assemblage artist who uses a range of media to create what he describes as rough, emotional work. He blends salvaged materials with found objects, photographs and other story-telling elements to create something new out of discarded and dispossessed components.

Or at the other location…

L.A. Artcore is pleased to present Los Angeles artist Lore Eckelberry’s solo exhibit at its Union Center for the Arts space featuring forty works of sculptural portraiture as well as portraiture on canvas. 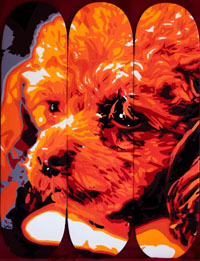 In her most recent creative development, Eckelberry constructs matrices of bounded skateboard decks using them as blank surfaces upon which her subjects are tenderly hand-painted. Eckelberry’s overall body of work depicts the artist’s cadre of close friends, family and family pets that are portrayed with emphasis on the celebratory way in which they are produced, where the likenesses of her subjects are subjected to the spirit out which they are produced as echoed in high-key color palettes of stark contrasts and centralized compositions. Eckelberry’s style has evolved in relationship to the artist’s multicultural experiences and international travels whose revelation of cultural diversity has underscored Eckelberry’s investigation of humanity.