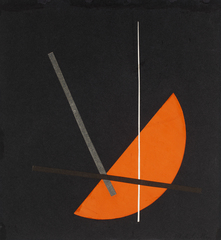 “Nagy: The Shape of Things to Come.”

This exhibition is the first to explore how the practice of painting served as the means for the artist to imagine generative relationships between art and technology. László Moholy-Nagy (1895–1946) is now recognized as one of the most influential members of the Bauhaus.

David Barlia and Brad Kay take the stage at the Steve Allen Theatre to perform vaudeville duets, in the tradition of Van & Schenck, The Happiness Boys, the duo’s act will be augmented late in the second set, by the Regressive Jazz Band, featuring John Reynolds, Corey Gemme and Maquis Howell. 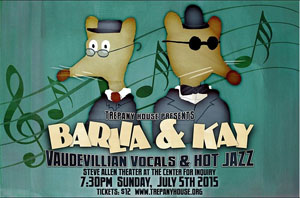 Here is some info from Brad Kay *(this man knows his music): In case you are unfamiliar with Vaudeville Duets: in the nineteen aughts – teens – twenties, out of the many thousands of performers who criscrossed the country providing entertainment for the masses, at least fifteen per cent consisted of two guys and a piano. It was a simple and effective format, low overhead and nothing to haul. All you needed was talent. The very best duo was (Gus) Van and (Joe) Schenck. They brought harmony singing to a high pinnacle of Art and simplicity. Joe played the piano sitting sideways, and sang a high tenor. Gus was the baritone, and could sing in any dialect. Neither had “matinee idol” good looks. Frankly, they looked like a couple of thugs. They appeared in black tie, and basically stood still on stage, though Gus was eloquent with his gestures. So nu? What’s the big deal? Well… YOU COULDN’T TAKE YOUR EYES OFF THEM! They brought a “gravitas” (trendy word, I know, but it fits) to their act which made their slightest gesture significant. Add to that their powerful, syncopated singing and you had an act that was the ultimate. They had a kind of Zen mysticism about them. And they played the Palace more weeks than anybody else in the business.

Admission: $12.50 at the door – For more info about the Steve Allen Theatre, go to the Trepany House website (listed below)

Enjoy the holiday….See ya next week!