Skip to content
Save the Date…October 18 & 19, the Beverly Hills artSHOW!

The Beverly Hills artSHOW celebrates its 40th anniversary on Satur

day, October 18, and Sunday, October 19, 2014, from 10 a.m. to 5 p.m. In honor of the 100th anniversary of Beverly Hills, the free weekend event will feature a “Time Spent in Dreamland” theme along with more than 240 acclaimed artists highlighted along four blocks of Beverly Gardens Park.

“The Beverly Hills artSHOW is one of Southern California’s most popular outdoor art events. It features a diverse mix of L.A. talent alongside other artists and artisans from around the world,” said Karen McLean, Beverly Hills artSHOW Manager. “This event provides a great opportunity for visitors to interact with artists as well as shop, collect and celebrate an art-filled weekend in Beverly Hills.” 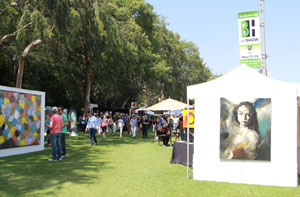 uben uses “abandoned objects from a discarded past,” which is a lifelong project he began working on as a child growing up in El Monte, California. His artwork has been showcased in various Southern California fine art galleries, including the Loft at Liz’s and Gallery 825. Monica Wyatt will display her visual storytelling with three-dimensional pieces that reflect relationships, childhood, time passage, marriage, motherhood and secrets never told.

The “Time Spent in Dreamland” show will include various kinds of art that capture the paradise-like components of Southern California ranging from palm tree-lined streets to pools. The show will also highlight several artists who explore a darker side of those dreams, evoking “noir” Los Angeles.

Exhibitors interpreting the Dreamland theme include a roster of accomplished artists ranging from large-scale painters, photographers and masters of drawing to several artists working in fine craft media. Notable artists include photographer Charles Frautschi, who captures radiantly-colored underwater figures in his new media work; Ray Harris and John Kilduff, painters of the idyllic side of the Los Angeles landscape; and dazzling watercolorist James Jones. 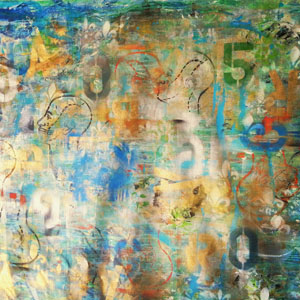 Contemporary artist Sona Mirzaei said she was excited to be a part of the event. “The Beverly Hills Art show is special because it gives a lot of LA artists a chance to showcase their talent and the community loves it and come to take part and a wonderful way to build relationships and highlight the diverse range of amazing art in our beautiful city.”

The artist will be showing an eclectic mix of abstract, mixed media, pop art and more. “This year it has been my goal to focus just on abstraction and a fun new body of work that reveals what has been lost and found in my creations over the last few years. Mirzaei is currently preparing for a solo show. She adds, “I keep putting out new works that continue to exude my passion of being an artist, my love of color, texture, details, design, overall productivity of a range of creativity and practice.” For more info about the art of Sona Mirzaei, visit her website at http://www.sonamirzaei.com/ 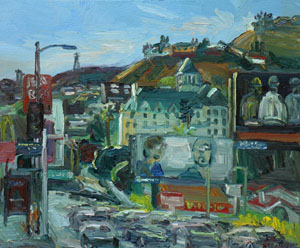 See image: by John Kilduff who has been presenting his work at the event since 1987. “Karen is the best! She really runs a great show!” said Kilduff.

Other artists who focus on California’s dream-like environment include Jesse Aldana and Teale Hatheway, who interpret classic Los Angeles monuments and vistas, many from L.A.’s Art Deco period; and two gifted renderers, graphite artist Rene Porter, who won the “Best of Show” award at the May 2014 artSHOW, along with Andrea Hsu Shouten, whose work in the unusual medium of scratchboard captures darker visions in respective black and white media.

In addition to Beverly Garden’s winding pathways lined with hundreds of art pieces, the show will also include a wine and beer garden, food trucks, live entertainment, and family art projects. Artists represented at the artSHOW will be on site to talk with visitors and patrons about their work.  All art is for sale and patrons come from Southern California and beyond to shop, collect and to celebrate this art-filled weekend. For more info see the Beverly Hills artSHOW website.