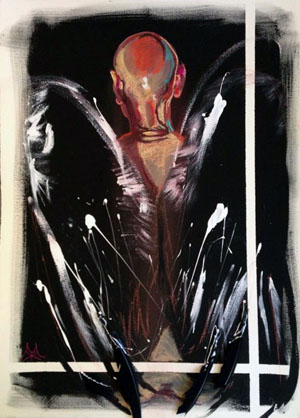 Zhenya talks about her process…

The wings are a loaded symbol – it conjures up an array of associations from angels to demons,from Greek mythological creatures to birds, from levitation to gravity, from rising to falling, from sacred to profane. It is precisely this simultaneity of contradictions and plurality of meaning that makes them appealing.

By chance my model Mark was gifted incredible giant black feather wings. Though I generally dislike using props, in this case it made perfect sense – it is as if his body had found a missing part. As soon as Mark stood on the model stand with his wings on, his anatomy was transformed – a true metamorphosis in front of my eyes. 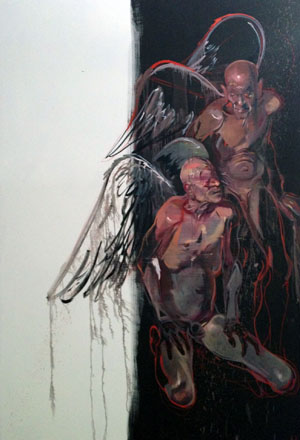 he work explores the issues of levitation both through the use of materials from fragile paper to transparent plexiglass to the compositions of bodies in amorphous black space at times separated from their shadows. Various bird states of being inspired the titles such as “Land, Molt, Perch, Ruffle, Nest, Hover, and Alight.” Drawing parallels with the feathered kingdom provides rumination on the immense human limitations and potential. We all carry our wings – some more visible then the others.