Save the Date…Friday, June 20th, the Jeanie Madsen Gallery and Cannibal Flower will host an eclectic group show and art party featuring thirty three artists. if you have yet to attend a reception here, gotta come on down…it’s always a good time….don’t forget to RSVP. 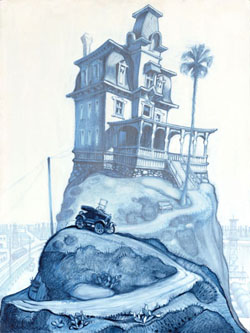 here will be some wonderful paintings, mixed media and photography on view. Work by artists such as John S. Reynolds, a prolific painter who also happens to be a prominent jazz musician will be on view. I had a chance to interview the artist to find out about his process and how the work begins for him. Reynolds has a busy schedule, dividing his time between music and art. He admits he tries to paint everyday, but sometimes can only squeeze in twenty minutes. Other times he can allow himself a six to ten hour block to paint. Reynolds explains, “Once an idea has invaded my brain, I usually start by putting it on paper as a rough sketch, and play around with the thumbnails until I have honed in on where I am going and then I just start. On a few occasions, I have just sat down in front of a blank canvas and just watched what was going on in my head present itself in oil paint on the canvas.”

The artist revealed to me that one of the works from the show, Oil Fields and Orchards (above) was an unplanned creation. The unexpected image just flowed from his brush.

Reynolds’ work has been part of group exhibitions throughout Los Angeles. He once sold a painting at one of his music gigs. He brought the painting to use as set decoration and sold it right off the wall. Check out the work of John Reynolds at http://www.johnsreynolds.com/

Friday’s ehixibition and reception is presented by the Jeanie Madsen Gallery and Cannibal Flower. L.Croskey (Cannibal Flower) is also a gallerist, artist and DJ (aka Mr. Numberonederful) as well as the co-owner of Thinkspace Gallery along with Shawn and Andrew Hosner. For the past fourteen years his pop up art shows “Cannibal Flower” (produced with Valentine Reitblat and Michele Waterman) have featured countless emerging artists. Madsen and Croskey met through mutual friends and have teamed up for the past couple of years to host some fabulous exhibitions and art parties.

The two have a mutual respect for each other…”He’s awesome (referring to Croskey), says Madsen. “He has amazing reputation…’the godfather of emerging artists’…he does so much for them.” Croskey in return says, “What I like most about Jeanie is she’s very open to new ideas and new artists.” Croskey’s art is currently being featured at Gabba Gallery in Los Angeles. 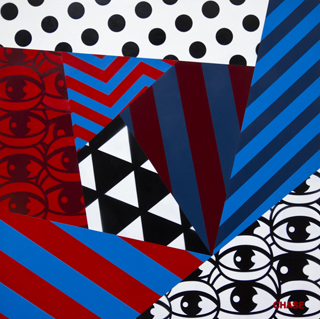 Another artist, Chase will have a couple works in the show. If you don’t recognize his name, you’ve surely seen one of his many murals across Los Angeles. Originally from Belgium, Chase was an active skateboarder and street artist in Antwerp, Belgium. He moved to LA when he was just seventeen to be closer to the skateboard scene. He has made quite a name for himself and is often hired to do commissions. He’s created murals for companies such as Tradeshift in San Francisco, (8 murals in their offices) and Variety Magazine…for their Los Angeles offices.

“I was a tagger for a few years back home in Belgium, 20 years ago. For various reasons I started asking for permission to paint walls as soon as I moved to the US, I quite enjoy taking my time in the daytime now,” reveals Chase.