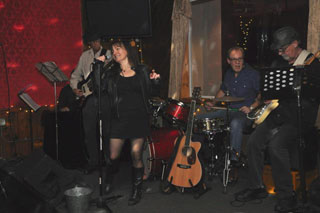 FRIDAY…July 26th, Kat and the Blues Hounds will play our monthly gig at Sonny McLean’s on Wilshire in Santa Monica.

Sax man, Lucky Wright is back!!!

Enjoy FREE blues every 4th Friday (NOT last Friday) from 9:15 pm until 12:30 am at Sonny’s, a fun Irish Bar, located at 2615 Wilshire Blvd., in Santa Monica…The Food is really tasty and admission is FREE!

ad guitarist, Nick Henry is also a music arranger. This blues veteran has played in many bands over the years, doing time with R&B Sax man Chuck Higgins, Lucky Wright, Guitar Shorty, Joe Houston, and the Coasters, just to name a few.

as also played with Nick Henry’s BlueZone from ’94 to ’06 and The Hightoppers ’06 to present.