Skip to content
Review: Ziggy Marley and The Wailing Souls Serve Up the Goods at Reggae Night XIX

For almost 20 years, KCRW and the Hollywood Bowl have turned the Bowl green, gold and red while providing a haven for reggae fans to gather, dance and listen to the biggest and best names in the business. 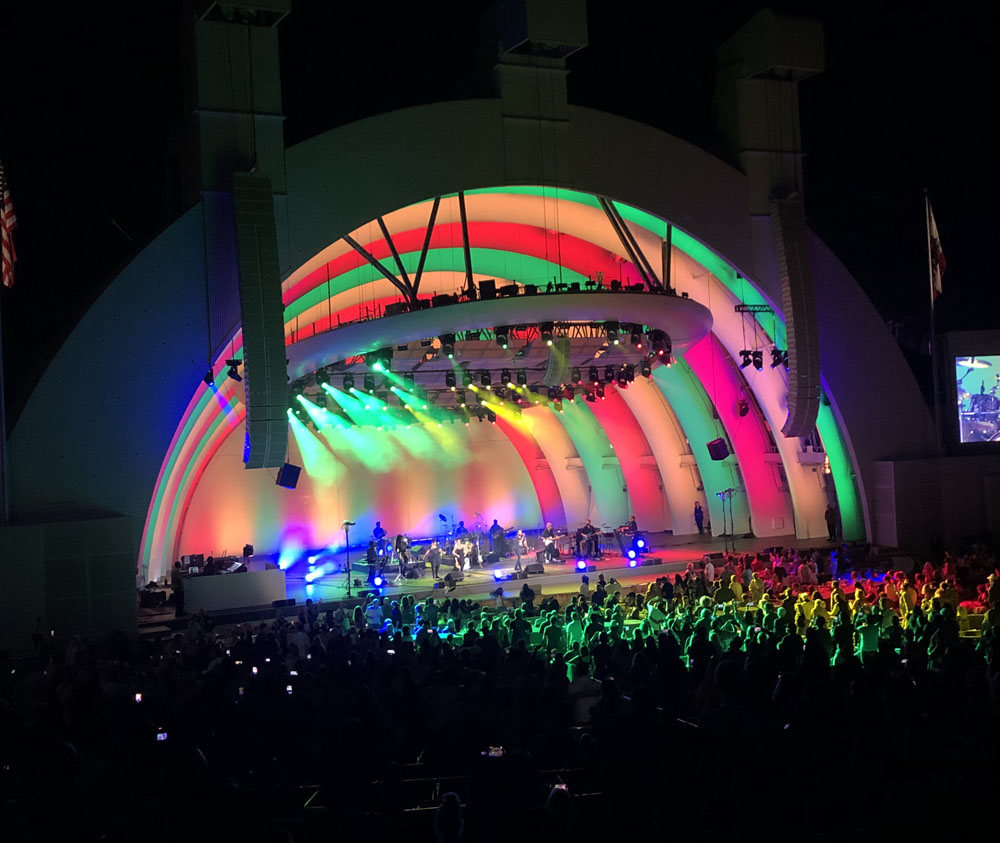 The Hollywood Bowl lights up in green, gold and red for its annual Reggae Night; Photo by Richard Bilow

This year’s event – Reggae Night XIX hosted by KCRW DJ Travis Holcombe was held Sunday, August 1st and as always was a splendid event!  The weather was great, the crowd was diverse, and everyone was in such a good mood celebrating their ability to see live music again. From the very first notes of the evening, people were up and dancing. You know the Bowl was the spot because the beloved, concert-obsessed “Dancing Man” of L.A.” was spotted strutting his stuff in the Garden Box section. 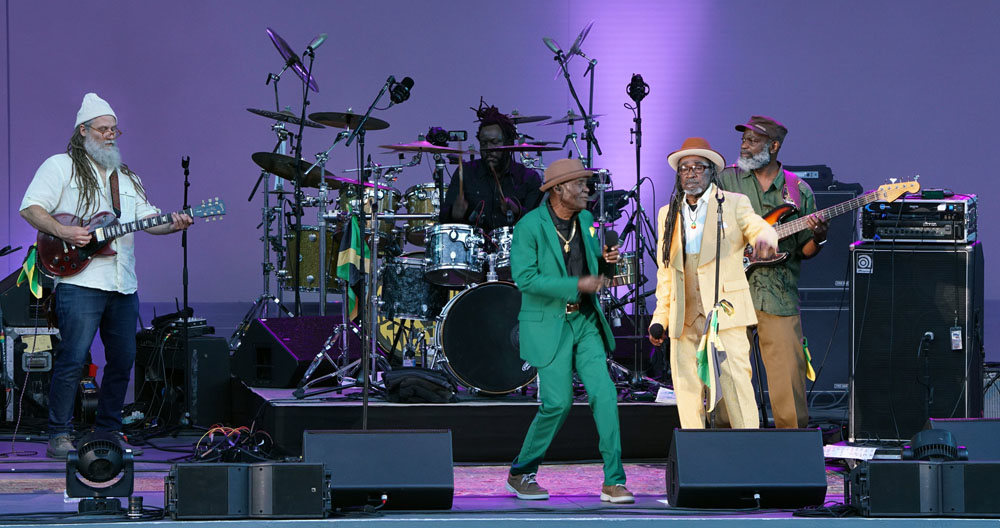 School is in session with Pipe & Bread; Photo by Richard Bilow

Noted, timeless classic reggae artists, Wailing Souls opened the show. Consistently active since 1968, the Wailing Souls are the consummate roots reggae band. The band grew together with Jamaican music, beginning with the rise of ska in the early ’60s, standing alongside peers like the Wailers in the ’70s and ’80s. They continue to record and explore new approaches to roots reggae on their 2020 album titled “Back a Yard,“ which features the group’s two longstanding charter members, Winston “Pipe” Matthews and Lloyd “Bread” McDonald. The album was produced by next generation reggae singer Alborosie.

The set list featured songs from the band’s 1992 Grammy nominated album “All Around the World.” They opened with “She Pleases Me” and ended with “Shark Attack” which is also featured in a reworked version on their latest album. In between, they played most of their other hits including, “Mr. Fire Coal Man,” “Firehouse Rock,” and “Oh What a Feeling.” A medley of favorites comprised of “5446” (Toots and the Maytals), “Hold Me Tight” (Johnny Nash), and “Cool Running” (Bunny Wailer) was a highlight, as it tipped a cap to their influences. 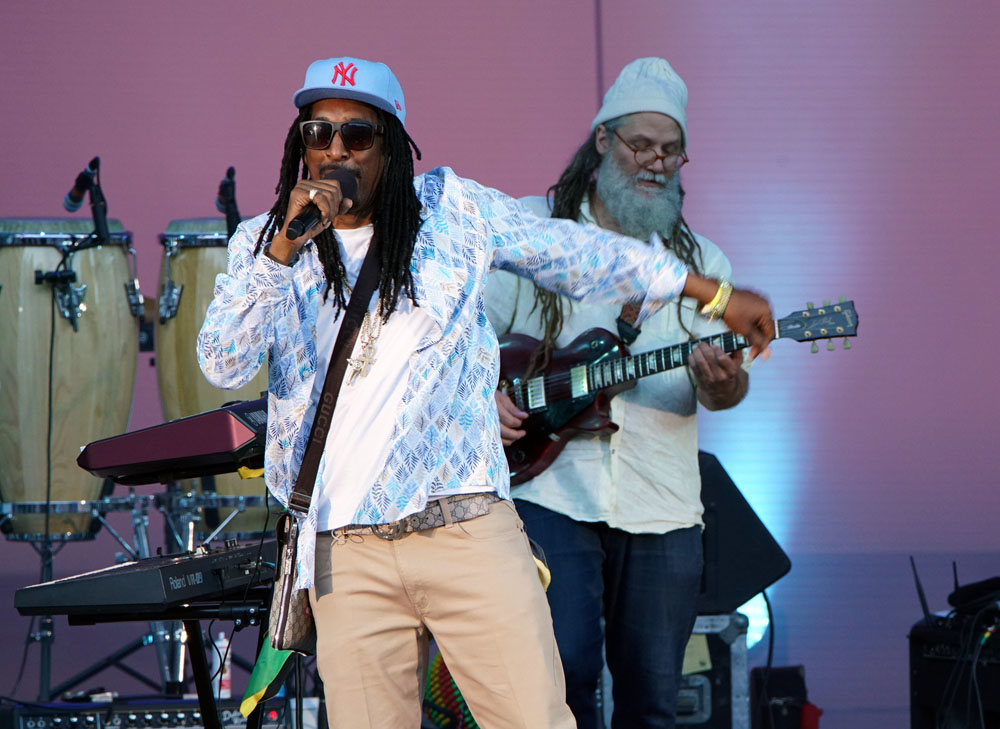 The stellar band led by Pipe and Bread showed the crowd why the Wailing Souls remain an immensely popular live act, and it was great to see them playing live again, spreading their message of peace and love.

The headliner for the last Reggae Night in 2019 was Damian Marley, so it only made sense for him to pass the torch to his brother Ziggy this year. 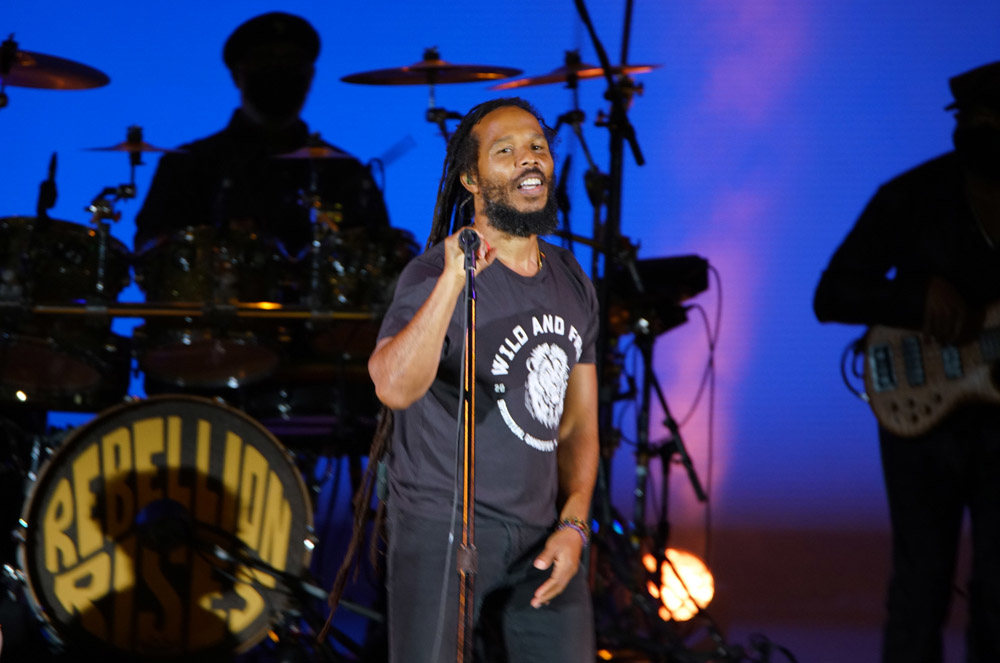 By now, Ziggy Marley has stepped out of his dad’s shadow. Sure, he has the rare distinction of being the second most famous Marley and the second most famous Ziggy (after Stardust), but he is reggae royalty. He is an eight-time Grammy winner, and it is hard to believe that he made his first album almost 40 years ago!

Ziggy and his band played an impressive socially conscious, roots-driven set that opened with one of his latest singles “Lift Our Spirits Raise Our Voice,” which was written during the pandemic, amidst the protests following the murder of George Floyd. The track is a call to arms with lyrics demanding “justice for all, and not just for some, son / equality under JAH moon and sun.” 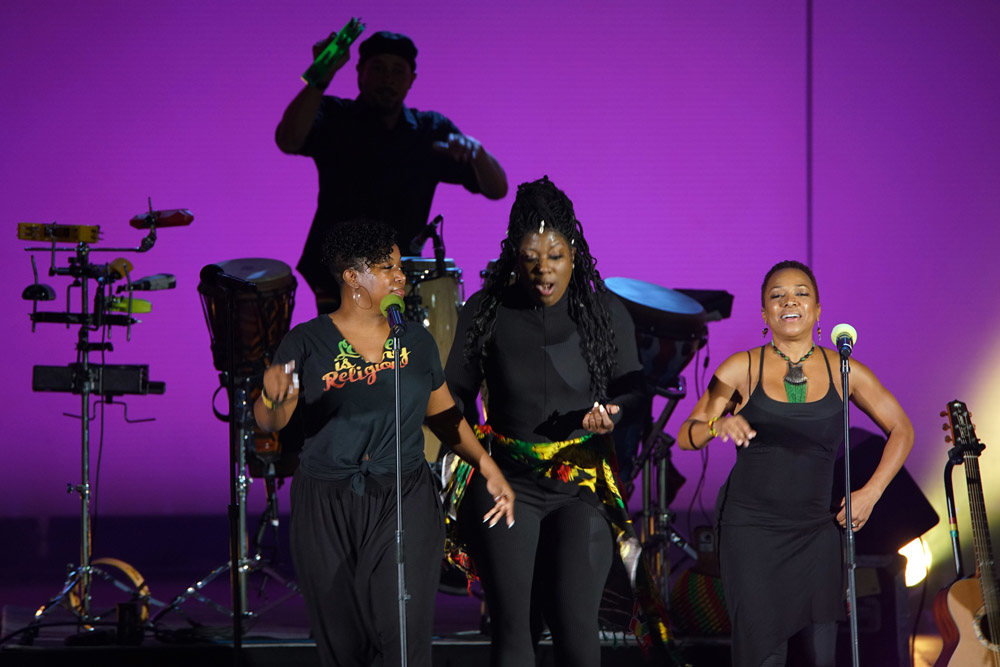 I was hoping to hear his latest single with Ben Harper “Spin it Faster,” but I guess that will have to be another time. CLICK HERE to check it out. if you are thirsting for a brand new, infectiously-danceable, deeply-grooving, hotter-than-July reggae anthem for the summer of 2021.

Of course, Ziggy also honored the legacy of his father and brought everyone to their feet by covering “Stir It Up,” “Burning and Lootin,” and “Is This Love.” He also revisited his Grammy-winning 1988 masterpiece, the Chris Frantz and Tina Weymouth-produced Conscious Party, with rousing versions of “Conscious Party,” and “Tomorrow People.”

Ziggy and the band keeping it real; Photo by Richard Bilow

The sizable band provided a large, grand sound that served the Bowl’s acoustics perfectly and highlighted Ziggy’s beautiful, soulful voice (which, incidentally, does sound eerily like his father’s). Special kudos goes to lead guitarist Takeshi Akimoto who brought a rock element to the tunes with his masterful guitar work. I can’t wait to dance and sway at next year’s event and see which Marley is the headliner – Ziggy, Damian, Kymani, Stephen, or Julian?  Maybe, we will get them all!  Find out more about the Hollywood Bowl, its concerts and annual performances on the website – https://www.hollywoodbowl.com