Rona Pondick’s Works from 2013-2018 at Zevitas Marcus show a chronological installment of a genuine artist. By genuine, we mean an artist who grows in response to a tiredness to previous exertions at novel beautiful creations, of one who’s mastery finds working the same tried way as banal if not deathly. Being able to continuously evolve one’s art is commendable in itself for the courage, as often times settled artistic success is defended rather risked – as is so common in humanity. 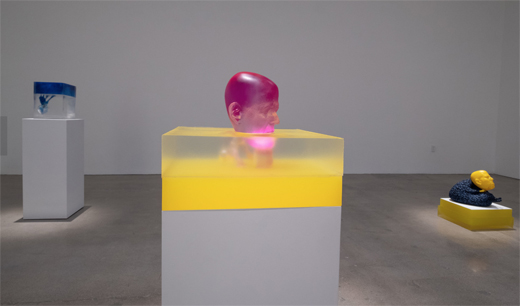 These works of Ms. Pondick show a masterful ownership of light. I can’t help but find parallels in her growth with the Matisse architectural finale Chapelle du Rosaire de Vence, where both find a melody in perhaps the quintessential ingredient to fine art: luminosity. After all, the fine arts are such a visual medium, with so much of the artistry being in subordination to what has been a fascination in human culture for millennia. To date, the physicist is perplexed by light’s quirky fundamental behavior, and thus too is made a servant to its nature.

Yet Ms. Pondick’s success with her works cannot be categorized in such adversarial terms. She is not “dominating” or “subjugating” – let alone “oppressing” – light. Her craftsmanship of illumination helps to choreograph a minimalism which can only be represented through her choice forms. Light permeates the lucid industrially-worked acrylic while also reflecting very coherent primary colors omnidirectionally. In a very real sense she is crafting light itself while impregnating the pieces with her very own fingerprint – or literally her head. 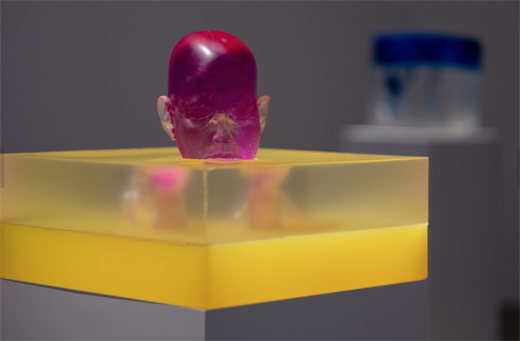 Yes, she does play with texture in Yellow Blue Black White, but her insistence on playing with the lucidity of her acrylic still resides. Further, as with the titles of all these works, there is a concentration on the purity of what form the light is appearing to us as, which helps us look past the anthropomorphic scaly figure to appreciate its more critical distillation. Perhaps, to Ms. Pondick, black, the absence of color, can only appear in this form, geometrically sandwiched between primary colors pseudo-biologically? Does this work further speak to the nature of evolutionary biology and Nature’s own brilliant use of light in the kingdoms of life? Indeed, light is so intrinsic to life that the latter is unequivocally conditioned by the former. Ms. Pondick’s brilliance, then, with her integration of biological elements, is not being satisfied with just a colorful experiment, but with a commentary on life itself.

This review has been previously published on adilettante. To find out more about Joseph A Hazani, his website and read more of his reviews, visit https://www.patreon.com/adilettante