Legendary Los Angeles band Little Feat made a stop last week in their hometown at The Saban Theater as part of their 50th anniversary tour. 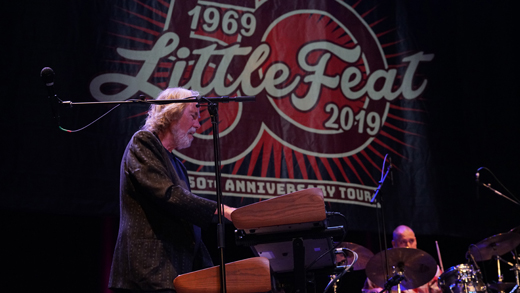 Co-founder and only original band member Bill Payne lets his fingers do the talking; photo by Richard Bilow; courtesy of LAArtParty.com

Formed in Los Angeles in 1969 by singer-songwriter and guitarist Lowell George while he was a member of Frank Zappa’s Mothers of Invention, Little Feat wasn’t a typical rock band. The band members were exceptionally gifted players who created a unique blend of R&B, boogie blues, southern rock, soul, country, folk, jazz and funk that was instantly recognizable as Little Feat.

Before George passed away in 1979, the band released eight albums of influential music that earned them a cult following and a reputation as a band’s band. Their fans include such luminaries as Jimmy Page, Bob Dylan, the Rolling Stones, the Grateful Dead, Widespread Panic, Van Halen, Dave Matthews, and Phish, who often feature “Spanish Moon” in their sets and have played the entire Waiting for Columbus album at one of their famed Halloween shows. 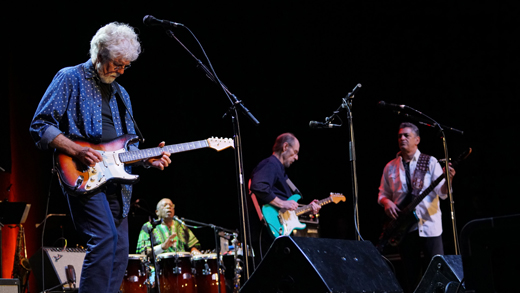 Guitarist Fred Tackett having some fun improvising with his long time pals photo by Richard Bilow; courtesy of LAArtParty.com

After George passed, it took the band seven years before they decided to give it a try without him. Since then, they have been laying down their irresistible grooves and touring the world.

The Midnight Ramble Horns joined the band for the third song and all subsequent numbers. The bluesy “One Breath at a Time” off their 2012 album Rooster Rag featured the guitar stylings of Paul Barrere’s but, to me the highlight of the song was the deep deep (and I mean deep) vocals of percussionist Sam Clayton. 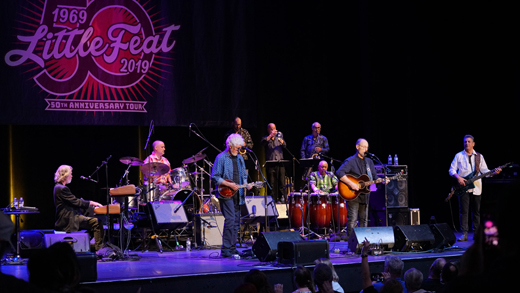 Guitarist Paul Barrere taking the band through the bluesy “One Breath at a Time” off their 2012 album Rooster Rag; photo by Richard Bilow; courtesy of LAArtParty.com

The band brought the crowd to its feat the first time with the Bill Payne classic “Oh! Atlanta.” The good time party tune began with the keyboardist showing off his boogie woogie piano skills which he continued on the next song that he dedicated to himself “Old Folks Boogie.” Trumpeter Steven Wilson’s solo near the end of the song really made the tune shine.

Percussionist Clayton stepped up to the plate as lead vocalist for the band’s funky classic “Spanish Moon” which was driven by bassist Kenny Gradney’s groove and the punchy syncopated keyboard and horns. This time it was saxophonist Jay Collins who belted out a solo that revealed why he is the saxophone player of choice for many well-known artists. The band dialed down the funkiness with a beautiful flute solo by Erik Lawrence on “Church Falling Down” a master lesson in mandolin finger picking by Fred Tackett on “Rooster Rag.” 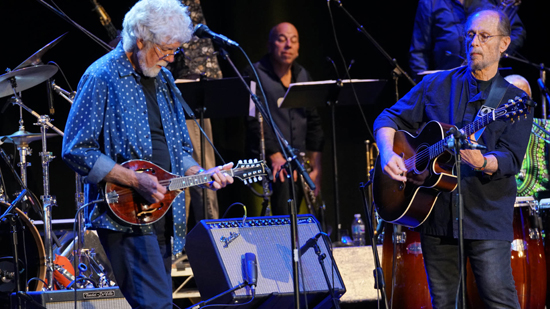 Multi-instrumentalist Fred Tackett shines on mandolin in one of his many soulful solos; photo by Richard Bilow; courtesy of LAArtParty.com

Tackett continued to display his mandolin skills on the band’s timeless gem “Willin'” which brought the crowd to their feet for a sing along. Allen Toussaint’s masterpiece “Everything I Do Gonna Be Funky” kept them standing. The band continued the shout out to their influences with their marvelous rendition of Hank Williams “Lonesome Whistle.”

After these tributes, the band had a secret up their sleeve. They brought out Doors guitarist Robby Krieger to kick out the jams, let loose and show he has lost none of his touch with his distinctive enduring tone ringing out as he traded solos on “A Apolitical Blues” with guitarists Barrere and Tackett. 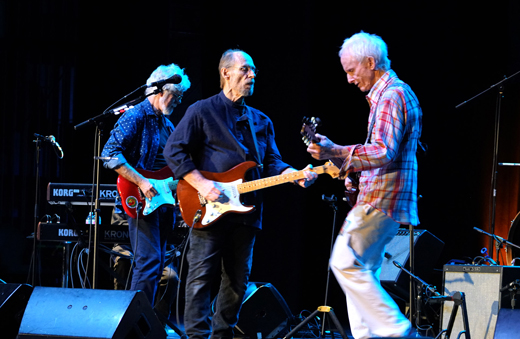 The Rock ‘n Roll Hall of Fame guitarist continued to jam with the band for “Fat Man in the Bathtub” starting another audience sing along followed by another standing ovation and chants of Feat, Feat, Feat.

With fans still on their feet, guitarist Tackett demonstrated his multi-instrumental skills by playing an engaging trumpet solo before the band broke into “Dixie Chicken” still accompanied by Krieger. The song is probably the band’s best known number and the one that had everyone in the crowd dancing as they reminisced about those care free days in the late 70s. As the song neared the end, keyboardist Payne broke into a lengthy piano solo before turning it over to drummer Gabe Ford who displayed his dexterity as the band members stepped away. The band returned and ended the evening most appropriately with “Feats Don’t Fail Me Now.” 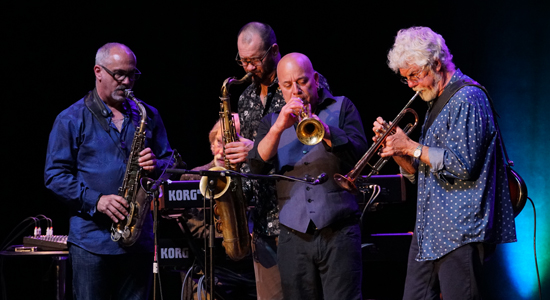 Fred Tackett joins in on trumpet with the Midnight Ramble Horns; photo by Richard Bilow; courtesy of LAArtParty.com

Overall, I was very impressed with the band’s performance and really enjoyed their stellar musicianship and the joyous comradery that comes from playing together for decades. They certainly didn’t fail anyone and it’s truly baffling that with all of their gold records and critical acclaim, how they can’t be in the Rock and Roll Hall of Fame. Shame on the Fame, for the Feats are still truly a marvel and I think they are way more deserving than Bon Jovi, the Cars, Jackson Browne, Cheap Trick, the Dave Clark Five or The Moonglows! 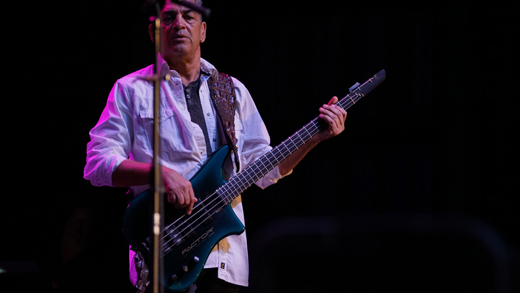 Don’t miss them the next time they’re in town and while you’re waiting, put some Little Feat on your Spotify playlist – you’ll thank me.